To the common movie-goer, the threat posed by explosive devices such as nuclear weapons, time bombs, or good ol’ fashion grenades is hugely immense, with death and indescribable destruction being common consequences of their detonation. However, as it turns out, that might not be the case…

Nuclear weapons are awesome; they are the most powerful manmade destructive force ever; 2 separate bombs nearly wiped two cities clean off the earth. Wow. Both were air-bursts and were up against buildings which, while very strong, are relatively brittle (see what happens every time the earth shimmies a little).

In Independence Day and Armageddon, humanity was faced with destroying objects the size of Texas and a quarter of the moon, respectively. You know what Hiroshima and Nagasaki weren’t? The size of Texas or a quarter of the moon. As strong as a nuclear weapon can be, a single weapon is not going to displace that much mass, even from the inside. If that was the case, then the first underground nuke test would have blown a hole bigger than Rhode Island in Nevada. 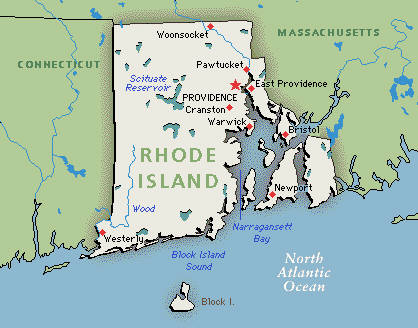 This also ignores the fact that if you did manage to cause something that big to explode, the fallout would probably be much worse than if you hadn’t blow it up in the first place. To describe things in a dramatic Billy Bob Thornton fashion: If you get hit by a bullet, life sucks for you if it hasn’t just ended. If you get hit by buckshot, you may very well wish you had died if you survived. 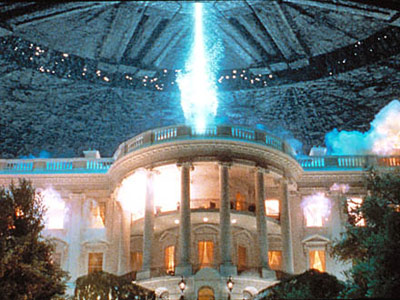 Successfully blowing up the mother-ship at the end of Independence Day would have been as devastating, if not more devastating than the alien invaders’ initial assault. Imagine if a quarter of the moon suddenly came crashing down on the earth, with large portions of it suddenly in degrading orbits. Remember that scene in Armageddon where the meteorite takes out Paris? That was one of the few non-retarded and scientifically plausible parts of that movie. ID4’s explosion at the end would have created hundreds of those, with its proximity to the earth ensuring that most of it would plough into the ground right above ground-zero, send city-sized shrapnel circling the planet, and probably blowing a hole in the atmosphere. In fact, the total level of horror would entirely depend on whether the ship was over land or water when it ‘sploded.

Shockwaves are Magical Cushions That Will Save Your Life

Remember Indy in the fridge? There are also plenty of movies where the hero is at the front door of a building which then explodes (or Tony Stark who is exploded and suffers a little bit of shrapnel damage) only to get up dazed. In reality, the shockwave is often as lethal as the shrapnel that is thrown. The pressures created by the big building destroying explosions will cause lethal blunt force trauma over a wide area of the body. Indiana Jones would have been hamburger filled with skittles. 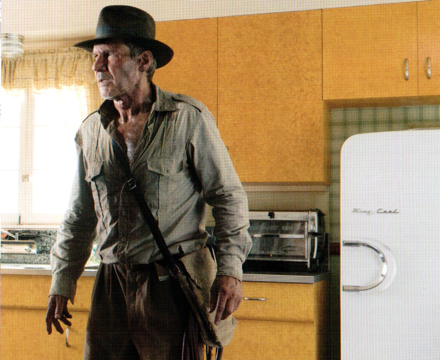 Let’s also not forget that any explosion large enough to throw a man sized target clear is also going to have created a significant amount of shrapnel. Shrapnel is going to be smaller than man-sized, which is important because that means it is moving much faster, being that it takes less force to move something small, but has been acted upon by the same amount of force as said man-sized object, and is usually made of wood, metal, concrete, rock… you get the idea; shit much harder than human flesh. 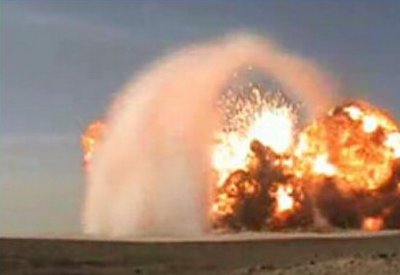 In movies, the bigger the boom, the more Baygasmingly firetastic it is. In reality, the bigger the boom, the more fuel is consumed at the moment of detonation, therefore less fire is produced. Take thermobarics for example; they are also called “fuel air bombs”, meaning they use explosives/highly flammable substances to create an explosion. They are about as flamey-explodey as you can get if you look at the components, but in reality there is a brief flash followed by a massive concussion wave. The kind that would have killed Indy up there. 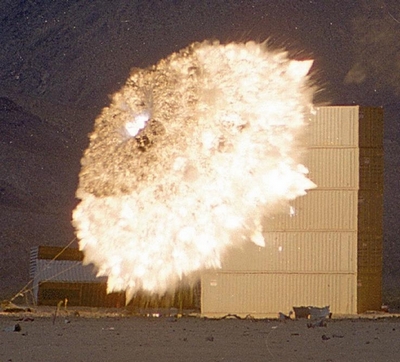 The picture looks impressive, but when you see it in realtime, it is much less impressive to look at.

Oh shit! The timer is running out and you have to cut the right wire or everyone dies? Why not cut all of the wires? After all, if there’s no way for the current to go to the explosives, there is no way to blow them up. Plastic explosives can’t tell if the detonators are connected and then blow up out of spite if they aren’t. Then there is also the fact that you could pull the detonator out of said explosives and throw them out the window, where they will make a dramatic pop and then do nothing. Plastic explosives are basically silly putty if you don’t pass a current through it. 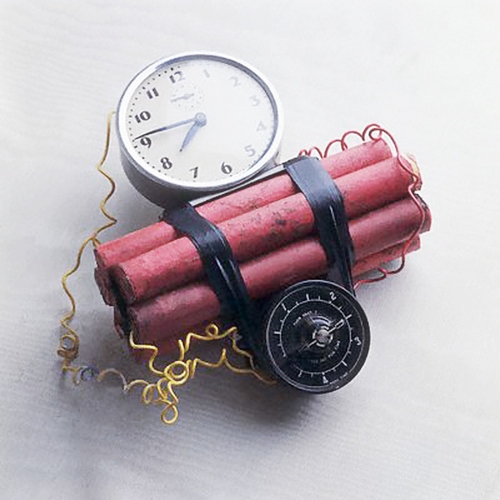 Explosions in Space Come with An Expanding Ring

In both of these, a great big thing is made all explodey. In both cases, a big dramatic ring is created from the explosion that propagates through space in a dramatic fashion. Most likely, these effects were inspired by real life explosions in dusty areas where you see and expanding ring race across the ground after an explosion. That is the blast wave kicking up dust as it radiates out from the explosion. It happens pretty much in 2D and is only visible at ground-level if there is a medium to be kicked up by the boom. Space has neither. 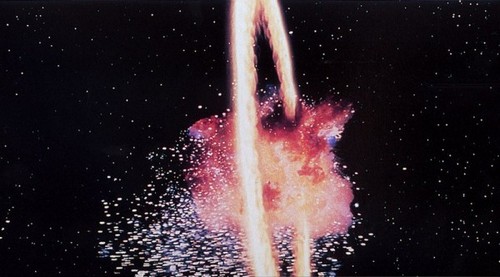 Damaging Pressurised Containers Will Make Them Blow Up

Dr. No, Jaws, Live Free or Die Hard, Dawn of the Dead (’04) This one covers such stupid things as puncturing a fire extinguisher causes a catastrophic explosion (Die Hard 4) to propane tanks being low-yield nuclear weapons (Dawn of the Dead).

To cause the explosion in Dawn of the Dead (they were kind enough to stuff lit road flares into the propane tanks to justify their explodiness), they would have needed a100-200lb can of propane to clear out the number of zombies they did. 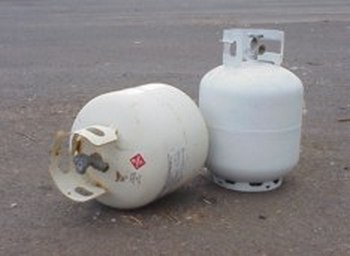 And let’s not forget that every car in movies is apparently equipped with a few sticks of dynamite and a mercury switch to blow them up the second they are no longer horizontal.

Space Explosions are Fiery and Loud

Space is essentially a vacuum. While not a true vacuum as nitpickers like to point out, for the purposes of a reaction that requires relatively dense air to work, it is. As a result, if there was a fireball at all, it would end the microsecond the fuel was expended, pretty much the microsecond it exploded. Then there is the shockwave/noisy blast. That is energy propagating through a medium; “nothing” is not a medium.

So as awesome as Jango Fett’s sonic mines or whatever they were, there is absolutely no way for them to work. 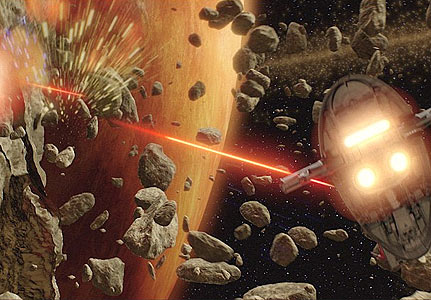 Here’s the scenario; the villain has placed a bomb in the microwave and put it on for an appropriately dramatic amount of time. The hero discovers the bomb and runs like a motherfucker for the nearest entrance. The microwave dings, time’s up, the bomb explodes!

What the fuck?! This one is simple; if the microwave is going to explode a bomb, it’s going to blow the bomb up the second the microwaves build up enough energy in the bomb, probably after a second or two. 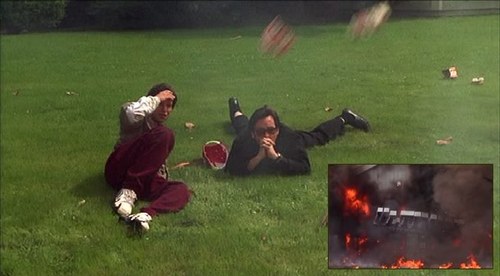 Hand Grenades are the Equivalent of Several Sticks of Dynamite

We’ll use the RoboCop example; Clarence Boddicker pulls the pin on a grenade and leaves it on Bob Morton’s cocaine covered coffee table before strolling out the door. When the grenade goes off, seconds later, a massive fireball erupts from the house, blowing the windows and doors into the next state. 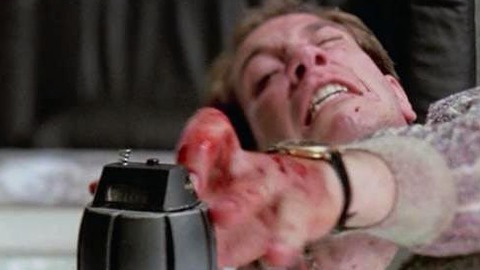 While they can be devastating, grenades are not monster explosives. They are intended for multiple kills in a confined space. The closest thing you get to a flamey grenade explosion is from an incendiary grenade, which isn’t like an exploding flamethrower but more like a superheated block of thermite, which is way, way more awful. 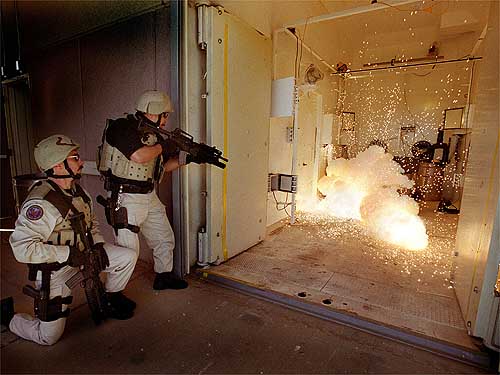