Home Entertainment 9 Local Commericals: So Bad They Are Good & So Bad They...

When economic times are tough, small companies and businesses are often the first to feel the hits. In order to get some cash flowing again many a proprietor has dared to enter the daunting world of television advertising. Naturally, funds are an issue when most are struggling to keep their heads above water. As much as store owners, law firms or anyone in need of promotion may want an ad featuring a sweeping musical number, CGI dinosaurs or Tom Hanks as a spokesman they are usually forced to settle for less… a whole lot less.

For those unable to afford the services of full orchestras, Industrial Light & Magic or Hollywood A-listers there’s always the option of “creative” local commercials to get their names out there. Sometimes such low cost commercials can be effective (that is, if they are done right) but very often they can cause more damage than good. And by “damage” we mean they can potentially turn your business into a laughingstock worthy of both local scorn as well as global ridicule via YouTube. 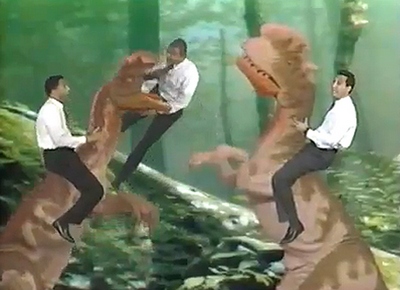 Schweig Engel’s insane ads are quite notorious for residents of St. Louis. We mentioned the use of dinosaurs a bit earlier and how such a feat was seemingly impossible for anyone on a budget. Well clearly that didn’t stop the guys from this unconventional financing company. In the following advertisement, their motto is screamed at the viewer: “no one should be eaten alive by high prices and finance charges!” Naturally they literally illustrate their point by showing someone being eaten alive. Obviously the guys have a quirky sense of humor. Aside from the comical attack on the “competition” what we find most unsettling is the man on the left who seems to be sensuously caressing his dinosaur throughout the ad. But hey, who are we to question a man and his lust for a prehistoric beast?

Their next two ads are just as bat-s**t insane but are certainly deserving of at least a mention. Spoiler warning: prepare to witness a cartoony decapitation and the most confusing use of superheroes imaginable… 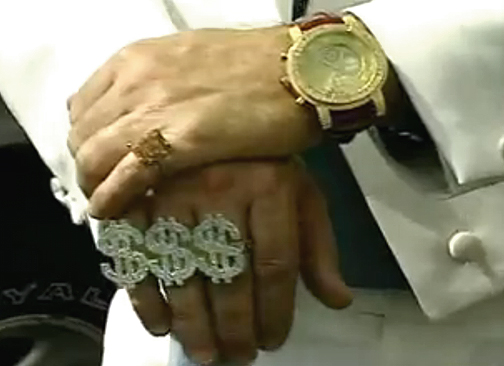 Setting Eminem and white people back a few thousand years is Georgia’s own rapping car salesman Credit Mac Daddy. He offers “great cars and best of all “No Credit Check!” Granted such an offer is likely useful to those looking for a ride (and whose credit is in the toilet) but surely there must have been a better way to sell folks on such a simple idea. Dressing up like a cheap cliché pimp and embarrassing yourself by rapping about your business seems like an idea you might come up with while drunk or high but thankfully would forget about the next day. 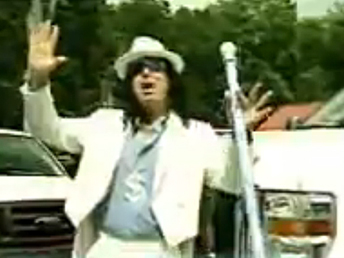 Well never put it past a businessman with a huge enough ego to jump in front of a camera and act like a complete a**hole. 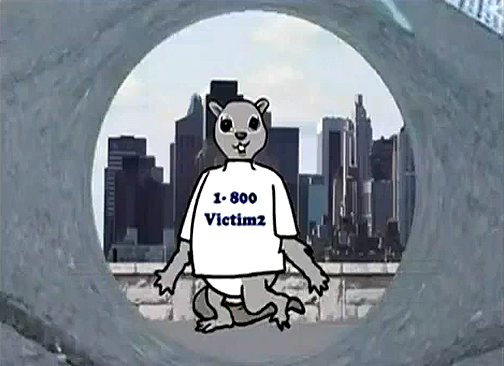 Those ridiculous lyrics as danced to by an awkwardly drawn squirrel seem brilliant in comparison to Credit Mack Daddy’s braggadocios ramblings. Nevertheless, the song, the brainless squirrel, the amateur acting, the fact that the phone number is obnoxiously repeated four hundred times, everything about this Bronx ad for a local injury lawyer is irritating and sleazy. 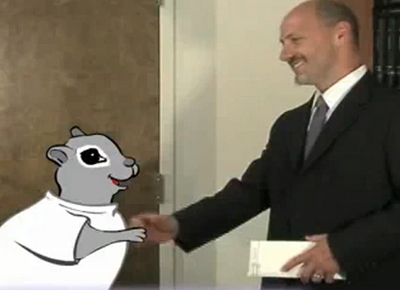 Wait, why do I want this guy to be my injury lawyer? Seems like he only represents clumsy cartoon squirrels.

Here is the most awful of the ads. Note the actors who, despite being in horrible accidents, can’t help but have smirks on their faces.

For the record there are currently two other versions of said commercials. Predictably, each ad is equally dreadful. 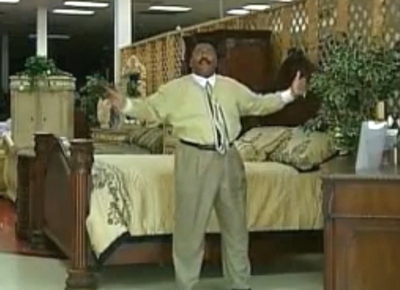 While our last few entries either lacked style, rhythm or the ability to not come off as repulsive, we at least have to credit Sammy Stephens for being entertaining. We hate to admit it because the commercial is undeniably cheesy yet it’s also strangely appealing (in a hypnotizing way) and it’s also sort of catchy (in an annoying way). This particular commercial has had it’s time in the limelight and its share of internet fame. The star of the ad, Sammy Stephens is a businessman and former disk jockey from Montgomery, Alabama. He created the rap-inspired spot for his seemingly awesome flea market.

Aside from numerous remixes and meme references found around the web, the commercial was also made a bit more famous when a spoof was featured on the Fox’s The Cleveland Show… 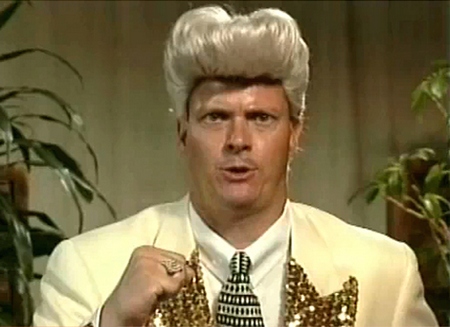 Just when you thought it couldn’t get any crazier, we bring you Rev Rob. This ad campaign began in 1997 in the bible belt of Charlotte North Carolina. As the following commercial proclaims, it is Rev Rob’s righteous intention to “heal your credit” and other such nonsense. According to Rev Rob himself “these ads got me kicked off the local ABC affiliate WSOC-9 in one week. They said they were getting over 80 irate phone calls a day. Then I got kicked off CBS WBTV-3 in two weeks! I have ticked off a lot of “holy rollers” in the last 10 years, but it was worth it!”

Clearly there’s no shame in his game. See if you can watch the following vid and figure what in God’s name this is supposed to be all about.