Home Home 9 Awesome Sky Cities (And Why We Love Them)

From the moment we first perceived a city floating free in the air like a spaceship, but not quite in space, we knew the way that we wanted to live in the future. Why bother with all the problems of dealing with mountains, rivers and swamps and the inevitable floods and rockslides that accompany them when you can literally rise above it all?

There are two basic classifications of sky cities. One is the true sky city that floats in the sky with no need to contact the surface below. The other, “partial” sky city is one that maintains a tenuous connection to the earth.

It’s too bad that these sky cities are either a) featured in games or movies, b) only the apple in some mad genius’s eye, or c) “sky cities” in name only, as they are firmly rooted to the ground and a little on the puny side. Someone needs to get working on making these things a reality, stat! 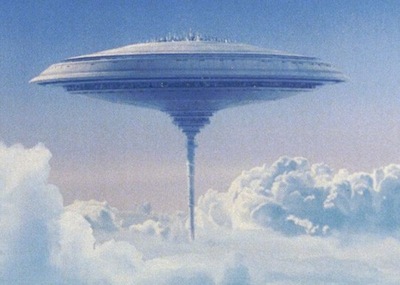 If you don’t know what this is, you fail at life.

For many of us, the original introduction to sky cities was Lando Calrissian’s infamous Cloud City in Episode 5 the second Star Wars movie. We watched in awe as tiny spaceships, dwarfed by the size of the huge structure, zoomed to and fro. We witnessed passageways and lavish suites, meeting chambers and pretty much everything you could expect from an awesome sky city of the future. Even a torture chamber! Well, we might leave that out of our own personal future designs, but we’re not here to judge. Just to admire. 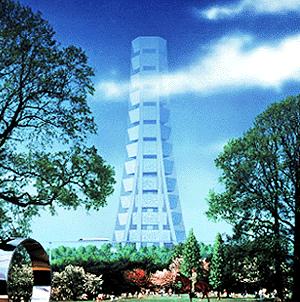 So it’s not exactly floating in the sky. Still, pretty badass.

Trust the Japanese to come up with an actual, real sky city. At least, in theory. Land prices are high in Japan, so it makes sense to build up instead of out. At a proposed 1,000 meters high (that’s 3,281 feet for you Americans out there) and 400 meters (1,312 feet) wide at the base, there will be plenty of room for all of those silly Japanese things such as furry conventions and rolls of pre-cooked egg that come in tubes. Not to mention parks and living and working spaces. And if you ask us, they’re secretly planning on putting some rockets on the bottom of the thing to lift it up once construction is complete. We could totally see that happening.

Castle in the Sky 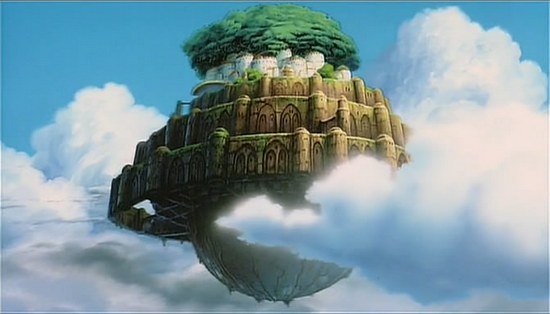 This image comes from the film Castle in the Sky. In the movie, humans have made many sky cities, but catastrophes have caused them to fall, except for the lone sky city of legend. We really feel for those poor folk who got to live in the sky and then had to suffer the embarrassment of soiling their feet on the boring old earth when their cities went haywire. We like this sky city because it’s the complete opposite of the one from Star Wars. Instead of a city completely encased in metal, you have a living, breathing oasis. We’re ignoring, of course, the reason for enclosing a city in the sky – survivability tends to drop the higher you go, what with solar radiation and plunging temperatures and lack of oxygen and all. If you could overcome all of those factors, though, it would be nice to have a sky city in which you could actually, you know, be out in the real sky. 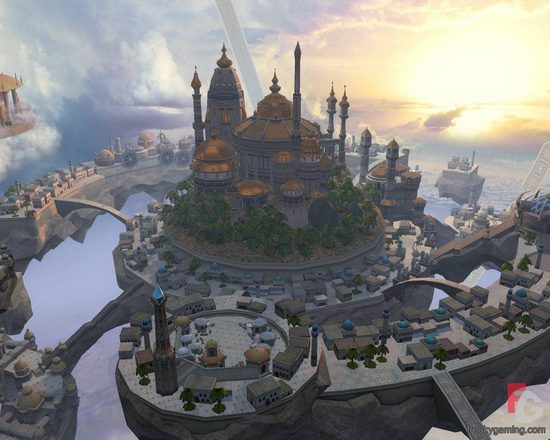 Perfect for all fantasy buffs who want to live in the future and the past at the same time.

Heroes of Might and Magic is a popular online game that caters to the fantasy lover in all of us. The game has its very own version of a flying city. This is perhaps one of the most serene and beautiful, as if a lovely piece of land simply decided the surrounding territory wasn’t pretty enough and so decided to wander off. This is actually more of an entire island than just a city, with everything you could possibly want for sky-bound bliss. You feel like nothing could ever go wrong if you lived in a place like this.

City from Beneath a Steel Sky 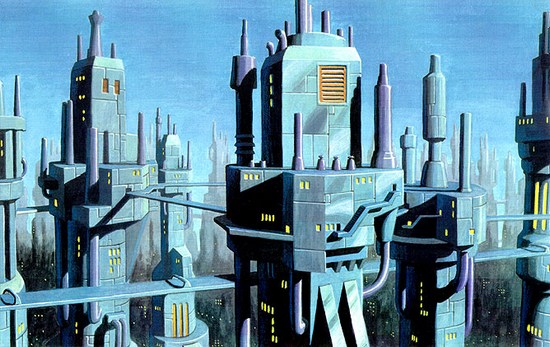 You could possibly leave… but why would you ever want to?

Beneath a Steel Sky was a PC cyberpunk adventure developed in 1994. The presence of this post-modern construction in the game just goes to show that sky cities were just as popular sixteen years ago as they are today. The image of the sky city comes from one of the developers of the game, on the Juniper Crescent site. This is one of those exciting sky cities where you’re not just up in the sky, closed in on all sides – you’re actually literally in the sky, as you walk from one tower to the next. Although, if it were us, we might add a railing or two…