As you may well know, outside the United Nations building in New York City flies the flags of every member country in the world. However, that isn’t all of the flags in the world because, quite simply, some are too retarded to see the light of day. Here are the worst we could find.

If you remove the red squishy… things… then we imagine this would be quite a nice flag with regal blues and strong lines and irregular directions. You could wave that over the horizon towards an invading army and the first they’d do after seeing it is tear away in the opposite direction, their pants a bit heavier and more poop-filled than we they beforehand. However, then the designers had to stick what they’re going to call ‘red asses’ all over it, which incidentally are what that opposing army are going to have after they see this flag and fall over laughing. 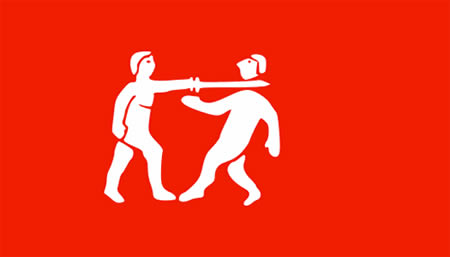 Take note Fryslan! This is how you do a manly as shit flag. However, despite the fact this flag was only used between 1440 and 1897, we can’t look at this without giggling and thinking about the bad guy from Terminator 2 with his arm which was an entire sword. Did the artists in Benin not know how to draw hands or something? The first draft probably had a truck chasing a bike on it, even though none of those things would have been around back in the olden times when this was drawn out.

Arrrrggghhh, our fragile eyes! If like us, you’ve just experienced a miniature epilepsy attack as a result of looking at this multi-coloured shitpile, then we recommend turning the brightness on your computer screen all the goddamn way down. And then some. And then smash it. The horrible thing? The image is now burnt into your retinas, so everytime you blink you can see it. Seriously, this looks like a chess set designed by the guy who discovered LSD or raving. At least if you decided to fly it in a darkened room, you wouldn’t lose it. 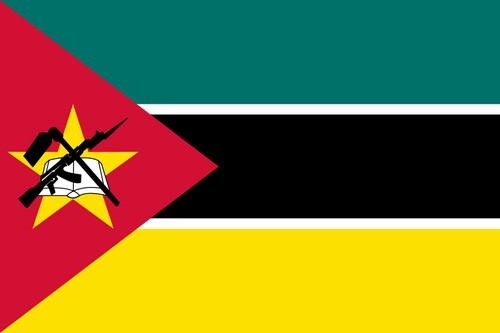 It’s nice that Mozambique attempted to use their flag to show people, and the world, what they value most. After all, there’s a book which obviously signifies education, and a hoe which obviously signifies agriculture and farming. However, an AK-47?! What? Who thought that was a good idea to use? We’d like to suggest to the government of Mozambique that whoever invented this flag should be shot, but that action wouldn’t go any way towards dispelling the story about how they don’t value guns that much there.

This is literally the gayest flag we have ever seen. And we’ve seen the one that hovers over Elton John’s house. It’s just the little flamboyant wreath that encircles the central motif, like the sort of floral wreath that they put over your head when you get off the plane in Barbados. If we have to be brutally honest here, it’s the giant stone penis sitting in the middle of the whole arrangement that makes the whole thing look like an advert for a porno set on Easter Island. Also, we’re ignoring the symbolism of the aforementioned phallus penetrating the ring-shaped wreath. This whole goddamn flag couldn’t get worse if there was the shape of two hands holding the wreath open more.

During the process of designing this flag, Sydney obviously ran into a huge problem: they had too much money. So they hired four different artists to design a flag for them. And then stuck all of them together, regardless of whether they look dissimilar or don’t have a matching colour scheme other than ‘horrific’ or simply fail to make any sense. Also, we can’t help but wonder if anyone has ever queries why the boat in the middle is sailing with the flag of England on its mast. That’s just a mixed signal right there.

Is it a piece of moss? Is it a plane? Is it a goddamn bird? No, seriously, we’re not just being rhetorical here and unintentionally ripping off Superman; we honestly have no clue what that splodge is supposed to be representing. If Italy was invaded by the Irish at any point during their long and boring history, we might see it as a four-leaved clover but we can’t even think that thanks to the fact that the only reasonable explanation we have was impossible (the Irish couldn’t travel such a long distance on account of being drunk).

Jesus, Nepal. It’s not even like you’re trying here. Nepal, it would appear, is the Hipster of flags, disavowing the traditional rectangular design because “triangles are totally cool and I was into them waay before any of you other countries were”. In fact, we just want to punch Nepal in the face right now. Fucking hipsters.