Home Home 8 Strange Things That Fell From the Sky

There were about 600 reports of strange things falling from the sky during the last century and many of them remain unexplained. We have focused on a few of the more recent episodes to bring you as much evidence as possible and let you ponder the theories. Now, be warned, some of the theories seem even more impossible then the event itself.

Honduran Festival of the Rain of Fishes

Of all the odd things that fall from the sky, fish are the most common. There have been countless fish rains for centuries, In fact, since 1998, in Yoro, Honduras they have held a festival to celebrate the annual fish rains called, appropriately, The Festival of the Rain of Fishes. The local TV station says it has been occurring twice a year lately. A National Geographic investigation determined that the fish are a blind, cave-dwelling fresh water species and their origins are a mystery. Witnesses say the fish rain is preceded by dark clouds, a thunderstorm and heavy rain. When the rain ends, there are thousands of 6- to 8-inch fish flopping around on the ground and the locals pick them up and cook them. During the rainy-fish season the locals set up frying stations and pass out fresh cooked fish as part of the celebration. Some attribute the event to a Catholic missionary, Father Jose Manuel Subirani and they call it a miracle. Apparently, he visited the town in 1854 and finding little food, prayed to God for sustenance for the people. It is said the first fish rain occurred immediately after and continues every year around the same time. 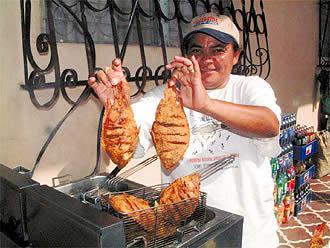 In May of 1981, the Greek Meteorological Institute found itself questioning its’ logical powers when small frogs fell on the city of Naphlion in Southern Greece. The best reason they could give for the frog-fall was that a very strong wind had picked up the frogs in their native North Africa and deposited them several hundred miles away in Greece.

More recently, a rain of small minnows and tadpoles fell in Japan’s Ishikawa Prefecture on June 4th 2009. Theories include migrating pelicans regurgitating as they flew high over the area. 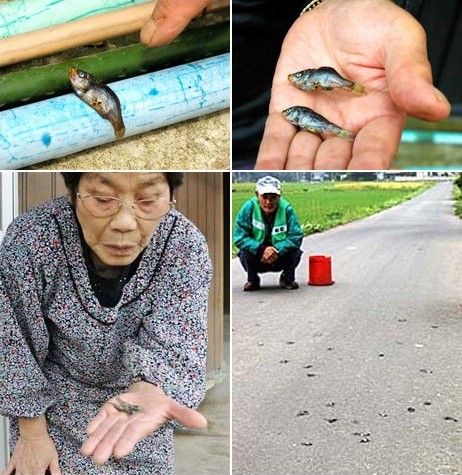 The most popular theory for their appearance is that water spouts or small tornados suck a school of minnows high into the atmosphere and deposit it many miles away from it’s natural origin. However, this does not account for why there is usually only one species involved and no rain of pond plants or beer cans. Another, more offbeat theory contends that there are clouds of oceans which defy the laws of physics, floating around the sky or in a parallel dimension which deposit their contents when a breach in the dimensional barrier occurs, like a wormhole to another dimension, or a fish hole if you will. 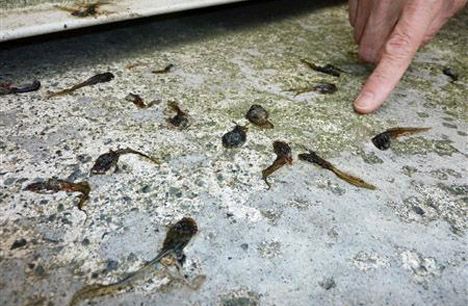 An inter-dimensional fish hole seems to be the only plausible answer why Kim Ho, a Korean fisherman was knocked unconscious by a frozen squid falling from the sky while fishing near the Falkland Islands in 1997. Unfortunately for him, he was unconscious for two days and suffered brain damage. His ship mates denied having any frozen squid onboard at the time or having a grudge against him for winning a poker match the night before.

On April 6, 2007, a rain of spiders was captured in photos by Argentine photographer, Christian Oneto Gaona. He was climbing San Bernardo Peak in Argentina’s Salta Province with friends when they noticed the ground covered with spiders. Looking up, they noticed the spiders falling from the sky. He snapped a few pictures to prove his point and then probably ran off swatting and screaming like a little girl. 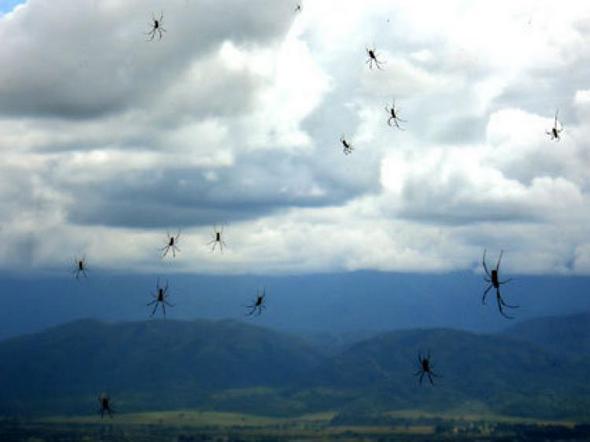