Quick: think of one thing you’ve seen people/robots/mutants/aliens do in movies that you wish you could do. Perhaps you wished that you could fly, or breathe underwater, or shoot fireballs out of your hands. But when it comes down to it, most of these wishes boil down to our desire to be able to fight like movie heroes.

According to Seinfeld, the average person (especially if you’re a man) believes he is a low-level superhero. We’d like to think that if we got into a situation where we needed to defend the weak or fight for our honor, we’d perform with flying colors – even if we’ve never once been in a fight in our lives. That’s one reason that watching a fight can be so thrilling. Just like with other types of entertainment, we like to pretend that we’re the ones in the middle of the action.

Because weaponless hand-to-hand combat can get a little boring after awhile, we’re including non-traditional handheld short range weapons on this list. You’d be surprised at some of the things that people decide to fight with! Anything that gets two opponents up close and personal in a ridiculous way is allowed. 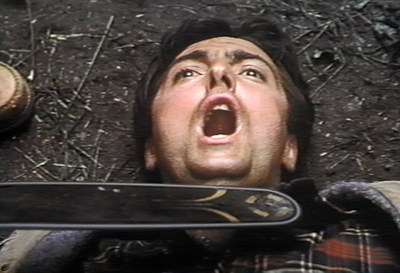 Probably best to close your mouth and pull your neck away from the chainsaw blade. Just saying.

No, this is not a typo. In the movie Prophecy, released in 1979 (which we only saw because it was on one of those rarely-watched movie channels, by the way), a man with a running chainsaw attacks a man with only an axe to defend himself. Glorious, terrifying combat ensues.

We suppose this confrontation was meant to say something deep about the eco-horror movie’s opinions about the struggles between Native Americans and corporations in the forests of Maine. But we personally think it says more about the how ridiculous hand-to-hand combat can get when you throw in a few unexpected battle weapons. Believe us when we say you don’t know fear until you’ve had a crazed man running after you with a chainsaw. Spoiler alert: neither the man with the chainsaw against his neck, nor any of the onlookers, end up getting killed. In our opinion, this fact is simply amazing. Because even after the man with the chainsaw decided not to kill his opponent, we feel that it’s entirely possible that he could have sliced up a person or two completely by accident. And that’s the type of injury you don’t just walk away from, no matter how tough you are. 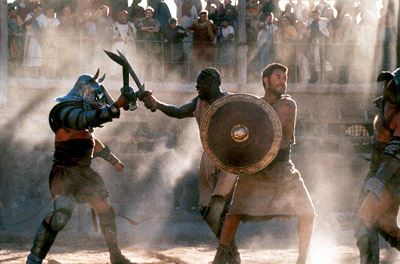 So you’ve chained us together? That just makes us twice the man!

There’s something uniquely cruel about the sense of humor espoused by the Roman Empire. It wasn’t enough during their gladiator battles that they forced men to kill one another purely for giggles; they also had to almost turn it into a theater production by throwing in some characters to make things all the more interesting to watch. Some characters, called the Essedarii, rode in chariots. Others, called the Retiarii, fought with nets and tridents. Still others, called the Equites, fought from horseback. Suffice it to say that the Romans pretty much invented ridiculous melee combat.

And of course, Russell Crowe managed to kick the butts of all of them. 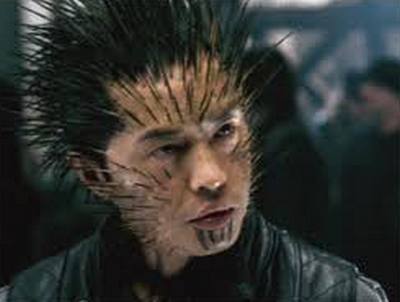 The X-Men movies contain many instances of superbly ridiculous content. Mutant super powers certainly don’t hurt when it comes to find new and creative ways to pit opponents against one another. There are so many great scenes that happen because of the variety of mutant abilities. Wolverine uses his claws to great effect. Callisto’s speed makes her able to attack other characters, such as Storm, from all sides at once. And Rogue’s ability to suck the very life-force out of someone is surely an interesting way to do battle.

Still, we have to say that we think one of the most ridiculous combatants in this movie is Porcupine. In order to injure or kill a person, he simply has to grab on and shoot out his spikes. There’s a definite intimidation factor there. We also feel it would be a pretty embarrassing way to die 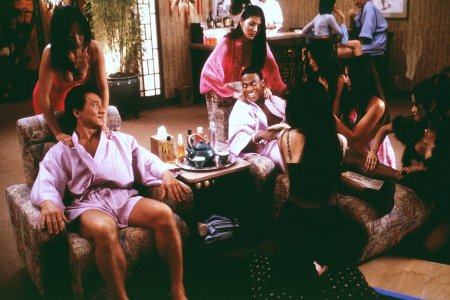 Massages always help us get warmed up for a fight.

If it’s been a while since you’ve seen a Rush Hour movie, let this little clip of a fight scene wonderfully refresh your memory. We’ll wait.

We don’t know about you, but we find Jackie Chan to be one of the best hand-to-hand fighters of all time to watch. There might be people out there more technically skilled than he is; however, he makes fighting just plain fun. He’s an expert at using his environment to his advantage – during the aforementioned fight, he makes use of the armchairs, a metal trash bucket, and the bodies of his opponents. And luckily for us, Chris Tucker gets in on the action by using the age-old, locker room, towel snapping technique. 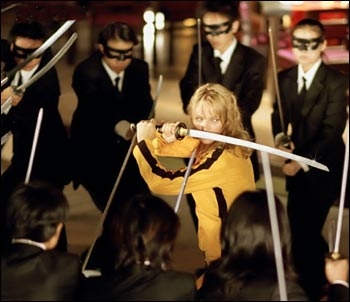 You might think at first glance that the fight in Kill Bill where the Bride battles the Crazy 88 is a pretty straightforward battle of swords, but in reality it’s so much more than that. The scene is pretty gory, so watch it at your discretion here.

If you watch closely, you’ll see that there are some wicked-looking balls on chains thrown into the mix, and other types of weapons as well. Add to that the fact that the Uma Thurman has to fight off a whole horde of attackers to make this truly one heck of a ridiculous battle to watch. 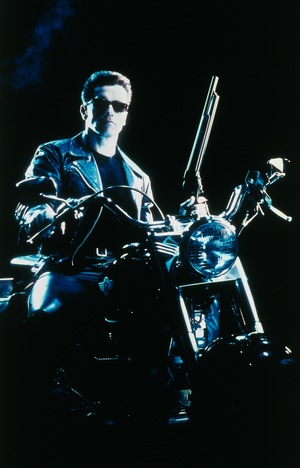 Can something really be called hand-to-hand combat if a robot is involved? We’re not sure, but it’s ridiculous enough that we’re willing to include it on our list.

You’ll probably remember the scene that we’re talking about, in part because it ends with one of the most well-chosen soundtrack songs of all time. In it, pool cues smash, knives stab, and a very unfortunate man tries to put out a cigar on Arnold’s (literally) metal-solid chest. The Terminator makes quick work of these sleazy bar patrons, breaking bones like they were matchsticks and even involving a fellow machine – in this case, a red-hot oven range – in his destruction. The terror he evokes is so complete that the biker in question gives up his most prized possession. And also, his pants. 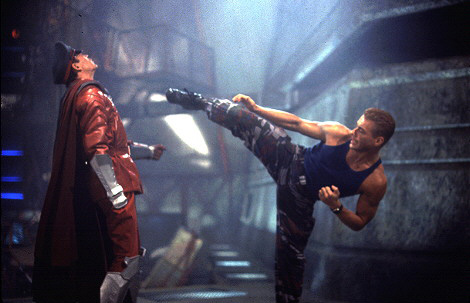 Guile uses the power of sonic kicks – he doesn’t even have to touch General M. Bison!

There is surprisingly little fighting in the movie version of Street Fighter, making it more campy and goofy than action-packed. The camp isn’t helped by Raul Julia’s outlandish performance as Bison. Nonetheless, there are a few fight scenes that definitely qualify as ridiculous.

First of all, the matchup between Raul Julia and Jean-Claude Van Damme doesn’t look exactly fair to start off with. Sure, in animated video games you can give characters pretty much any body type and we’ll believe they can fight one another. However, we care more about the fairness of a fight when we’re watching it in live-action. Second, each of the characters allows the other to use his special moves and tricks without fighting back. Probably because the makers of the movie couldn’t find a way to film that much crazy action on such a small budget. So Bison, for some reason only he knows, lets Guile kick him around without even trying to fight back; Guile, for his part, stands with his mouth hanging open while Bison slowly flies towards him and uses his lightning ability.

This movie apparently has something against the laws of physics. Meaning that it pretty much takes them and throws them out the window, figuratively speaking. This leads to a variety of interesting types of combat, and the occasional tantalizing delay of our fist-flinging gratification.

We admit, no matter how closely we watched this movie, we weren’t quite able to make sense of what was going on, or why exactly the combatants were capable of pretty much flying through the air. That’s just what happens when you get awesome at ninja combat, we suppose. In which case, we’ll have to leave you now, because we’ve got some fighting arts to study!

Did we forget a fight that was up close and awesome? Let us know in the comments below!