Given that sports in ancient Greece involved nakedness, olive oil, and swinging fists, it probably won’t come as a surprise that word for sport in Greek is the same as the word for pain: Agonia.

That’s right, folks, in Greece, sport = agony. So, by definition, you shouldn’t be allowed to call something a sport unless there is the possibility that participants will receive from and/or cause to their opponents large amounts of damage… especially if said sport is allowed into the vaunted ranks of the competition that the ancient Greeks freaking invented (that is, the Olympics). 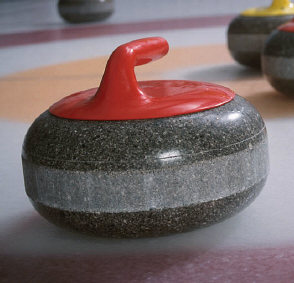 The story behind this invention obviously involved a large amount of alcohol.

Is there any pain involved in this “sport”? Well, there have been some reports of musculoskeletal pain. Picking up heavy rocks can lead to problems if you drop heavy rocks, and surely all that sweeping of the ice leads to blisters once in a while.

Why it defies the ancient Greek definition: Tell a football player that the worst injury he could possible receive while playing his sport would be a little soreness after a game. He’ll probably implode your head with his mind (followed by his fists). Sweeping the ice with brooms so you can slide a giant rock across it sounds more like that time that your mom tried to prove that doing chores was fun by putting old socks on your feet and soapy water on the floor than something that would be championed by the worshippers of lightning bolt wielding Zeus.

Is there any pain involved in this “sport”? Some people have sprained ankles, or hurt themselves if they’re not warmed up enough. And we’re sure that if you looked hard enough you could find reports of shuttlecock eye-impalement. But we’d have to seriously question you if you looked that hard.

Why it defies the ancient Greek definition: You can sprain your ankle just walking down the stairs. If you’re doing something that’s equally as dangerous as living your normal life, the ancient Greeks aren’t interested. Heck, their normal lives were more dangerous than crabfishing in a lumberyard. Extra negative bonus points for being invented when someone wanted to play tennis and couldn’t find a ball, and so used a small furry animal instead. And although we’re sure that you could come up with endless tasteless jokes based on the name of said equipment, that doesn’t qualify it to be a sport, either. 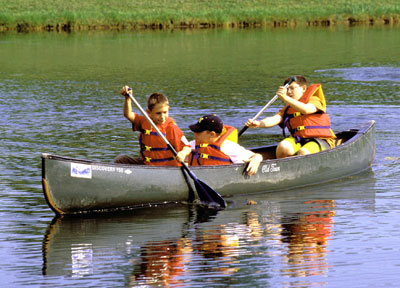 Is there any pain involved in this “sport”? Again, minor cuts, sprains, and muscle injuries can occur when one participates in this “sport.” We suppose you could add smacking someone with a paddle and drowning to those, which could possibly elevate it in the eyes of the ancient Greeks, but those usually occur under the influence of alcohol and/or rage, and so aren’t often seen during the Olympics.

Why it defies the ancient Greek definition: Okay, if there was a serious chance of drowning, we might reconsider our stance. But really, if you fall in the water during a canoeing competition and you can’t swim, and no one decides they want to save you, and you’re not wearing a life jacket, you obviously suck at life. You’re in a boat trying to get somewhere. Not particularly fast, like in sailing, or over particularly rough water, like in white water rafting. Basically, it’s just a step up from tubing in the speed and excitement department. No Greek sympathy for you! 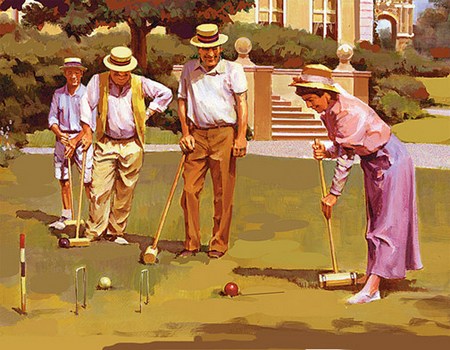 And after this, we can take on street luge!

Is there any pain involved in this “sport”? Well, sometimes your shoulder can freeze up. And we’re sure that the mallets could cause some injury if wielded properly – in fact, we’d like to suggest it if the Olympic committee ever reconsiders their stance on croquet.

Why it defies the ancient Greek definition: First of all, it only got into the Olympics in 1900, and we can’t imagine how much money must have changed hands behind the scenes to get that to happen. Then again, that was back when the rich people in power could basically have said “I want to make a sport out of changing hats and have it in the Olympics. Sound good, old chap?” and the Olympic committee would have been like “Jolly good! But only if they’re really expensive hats, after all, we don’t want just any rabble in our little competition.” Greek Olympians might have been rich and powerful and all, but at least they had some badassery to back it up.