Home Home 8 of the Worst Wrestling Gimmicks Ever

Laugh all you like, but professional wrestling is the closest thing we have to gladiatorial combat in our modern society. Granted, it’s fake and someone being eaten by a lion is a pretty strong indicator that something’s gone horribly wrong, but wrestling still stands as the only legitimate fight sport, if you ignore MMA, boxing, kick boxing, Mortal Kombat, American Gladiating and whatever it was Steven Segall used to do before he got all fat and weird.

Part of the appeal of wrestling comes from the characters. Covering a wide range of ideas, these gimmicks provide us with a visual representation of our wildest fantasies (who wouldn’t want to see a circus clown get hit with a folding chair?). However, if the characters are a miss, the whole system of homoerotic violence falls apart like so many clown skulls struck by chairs.

What happens when Fred Durst travels back in time and eats a whole bunch of cheesey gorditas? 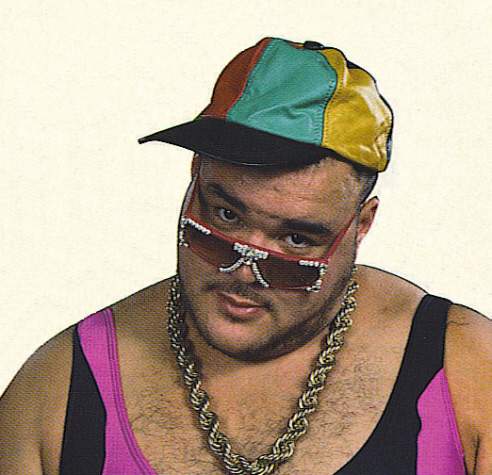 There’s an old tradition in pro wrestling when it comes to character development: find something popular and ruin it. Given his early nineties debut, News could choose one of two fads to model himself after: POGS or rap. Sadly, he chose rap, throwing rhymes every time he entered the ring, often including the riveting literary gem “Yo baby yo baby yo.”

It’s like Vanilla Ice if he somehow tried even less.

Gene Simmons is more businessman than musician. I can accept that, not because I want to, but because I can’t swing a dead cat without striking a KISS Mr. Potato Head doll, a box of KISS Kondoms or a bottle of KISS fragrance (spoiler: it smells like unpleasant sex). What I refuse to accept is that someone in charge of a multi-million dollar company would want to pay multi-millions of dollars for the exclusive right to paint a muscley guy’s face. 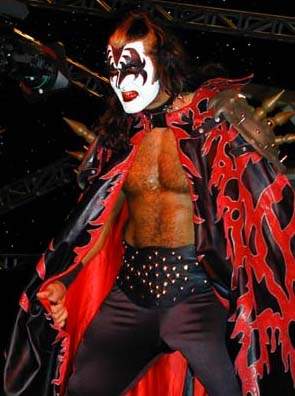 Clearly worth the money

And yet it happened. Originally the intention was to use all four of the KISS personas, but performers kept passing on the gimmicks. Eventually the KISS Demon saw the light of day, but was only for a brief period of time before he became simply the Demon, forever abandoning the KISS moniker as he entered his Poison phase. As it turns out, people who enjoy watching men pretend to fight and hold one another down for extended periods of time don’t like having their intelligence insulted. Who knew?

Enjoying wrestling requires a certain suspension of disbelief. If you’re willing to accept that a professional model is willing to pick up a part time job as a wrestler, risking injury to his body and jeopardizing his primary source of income, you haven’t suspended your belief so much as you’ve brutally murdered it and stashed the body in your basement. 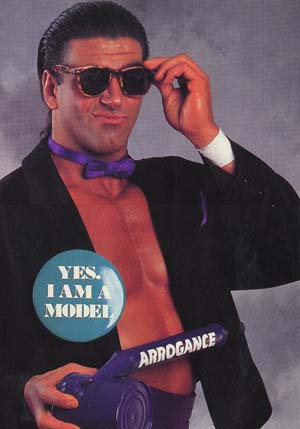 Also, please note the button. “Yes, I Am a Model.” You know your gimmick’s solid when the only thing differentiating you from any other crazed, half-naked man is a gaudy button identifying your employment.

One way to quickly develop an easy villain is to play off your audience’s absurd xenophobia. If pop culture has taught me as an American anything, it’s that foreigners are the devil. Knowing this, what’s the easiest way to anger your primarily American audience? 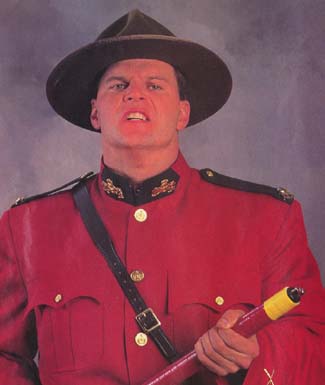 With an evil Mountie

Wait, is there even some terrible stereotype of Canadians to exploit in the first place? These are the same people who keep milk in bags. If anything, they’re far too nice and efficent with liquid storage to be considered evil. And why try to demonize the fine folks at border patrol? “Oh no, he’s searching my trunk! This will add ten minutes to my travel time! Curse you, lawman!”