Home Animals & Nature 8 Animals That Could Be Movie Monsters

There are an untold number of species of animals on this planet of all sorts of description, yet out of the millions we know about, Hollywood seems happy to focus on a select few as horror monsters: sharks, alligators (and crocodiles), wolves, and the occasional snake. In every case, they also to blow things out of proportion in order to make them into monsters (like the turbo snake in Anaconda). The most ridiculous part is that nature has already provided us with animals that are plenty terrifying all on their own.

You’ve heard of giant squids, but have you heard of colossal squids? They grow almost as long as the giant squid (the biggest we’ve found so far grew to 62 feet long) at a known max of 46 feet long, but are much more solidly built, making them the world’s largest invertebrate. They have all of the associated terror of a giant squid, along with the greater mass and hooks on their tentacles instead of suckers. 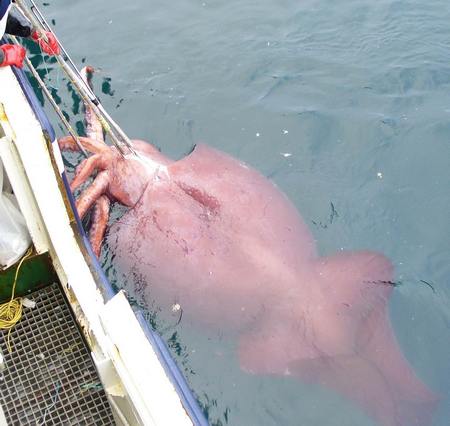 Reeled in fresh from your nightmares

Yes. Yes it is scary.

Fortunately, we have no evidence to suggest that anyone has ever been dragged to a horrible, watery death by one. Then again, cephalopods (squids and octopuses) are known to be the most intelligent invertebrates on earth, capable of complex behaviour without having what we would call a “traditional brain”. Something the size of a car with an unknown capacity for scheming might just be really good at covering its tracks.

Nothing makes a movie monster more terrifying than when it gets under your skin. If you have ever seen “Slither” or the old flick “Night of the Creeps”, you have seen how freaky this concept can be. Well, bad news, those creatures aren’t 100% garbage. Screwworms are awful little terror-bugs that give the human botfly a run for their money in the department of the world’s most awful insect. Something tells us those vampire teeth aren’t for attracting Kristen Stewart.

The babies hatch out of their eggs and immediately burrow straight down into the nearest living flesh. Living flesh. Most maggots are more than happy to just dig around in the dead stuff, leaving the healthy hard to chew meat alone.

Not the screwworm; they dig right in and set up shop, causing a deep, painful lesion where they hang out and then feed only on necrotic tissue. See, they cause the flesh around them to become unhealthy and die, then they eat it. They eventually drop out and burrow into the dirt, which is just super, leaving an awful open wound behind. We will submit screwworms as the first animal the earth can happily lose to extinction.

A cassowary, in case you didn’t know, is a large bird, related to emus and ostriches, that hails from Australia. Like everything from the Land Down Under, they take a familiar theme, and then make it scarier than it has any reason to be. In this case, the bird has a helmet that acts a lot like a battle-axe, an aggressive streak a mile wide, and bladed feet that can eviscerate with ninja skill. 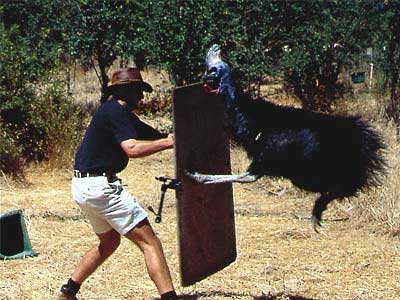 The dry cleaning bills for this guy’s pants must be enormous.

Okay, so there are no recorded eviscerations, but they do make for some awful puncture wounds, which can kill. Plus, look at that picture up there… Do you want to mess with an animal that can jump-kick like that? 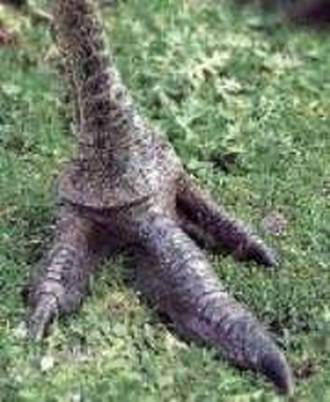 They may or may not have used this as the basis of the Raptors in Jurassic Park.

Okay, so thanks to flicks like Alligator, Lake Placid and Primeval, we clearly have plenty of movies about crocodillians already, but to our knowledge, nothing specifically about what the Australians call “Salties”. They are real life monsters; they can live in salt or fresh water, are MASSIVE (can reach 20′ in length) and apparently can get smart. They are also the largest currently living reptile known to man. They live on a diet of motors and anything too stupid to escape.

Also, he isn’t a salty, but if you have seen Primeval, the tagline for the movie wasn’t lying; the croc in the movie is based on a real monster Nile crocodile in Africa named Gustave, and he has eaten (to date) over 300 people, is an insane 20 feet long (Niles rarely exceed 16), is over 60 years old and has shown signs of extreme intelligence (for a crocodile).