A theme song can go a long way toward making or breaking the wrestler attached to it. A hard-driving, heart-pumping song that fits the wrestler’s character perfectly can catapult them to success, while the wrong choice can spiral them down the ladder into obscurity and eventual retirement.

Since there is very little humor to be found in discussing awesome theme songs and how awesome they are, we will be taking a close, hard look at the second category: theme songs that, for one reason or another, just don’t fit the wrestler. Sometimes, this mismatch doomed the wrestler’s career, while other times it just makes us shake our heads and wonder how green-lighted this ridiculous idea. 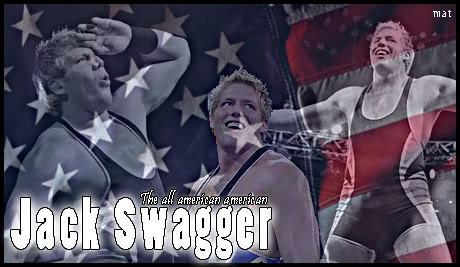 A dorky, patriotic wrestler who pounds his chest like a gorilla, does a couple of push-ups during his entrance, and boasts about being an “All-American American.” He does not, however, boast about knowing what that means, as he couldn’t possibly have any clue. We sure as hell don’t.

Also, he lisps quite significantly, rendering him a red, white, and blue Daffy Duck with muscles. Surprisingly, he has had a hard time being taken seriously.

Warmed-over Rage Against The Machine.

Yes, Mr. America marches to the ring to a rap-rock song that is blatantly ripped off from Zack de la Rocha and his old rebel band. Adding to the absurdity is the constant refrain of the song (also the title): “get on your knees”. Is he telling us to get on our knees, or is the song imploring him to do so? Because honestly, the second possibility makes far more sense. 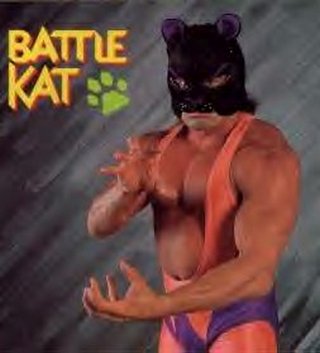 A cat. Really, look at the picture, not to mention the name. His gimmick was a cat. And would you believe he lasted maybe two weeks before the WWF sent him to the pound for good? If you were a kid growing up in the early 90’s, and your family went on vacation at the wrong (right?) time, you might have missed this man’s career completely.

If you manage to find anything resembling a melody in that horn line, you’re better at music than we are. To us, it truly sounds like “blast of notes…wait two seconds…a completely different blast…wait five seconds this time…big blast of notes that aren’t in any way related to the first two…wait seven seconds…blast…” In other words, it doesn’t even sound like a bad song. It literally sounds like nothing.

Virtually all theme music back then was done by one in-house musician, and it’s very possible he had an entire file full of rejected guitar riffs that he, stuck for ideas one day, pulled out of the box, adapted for a bunch of trumpets, glued together like a ransom note, hit the record button, and called it a night. Good work if you can get it. 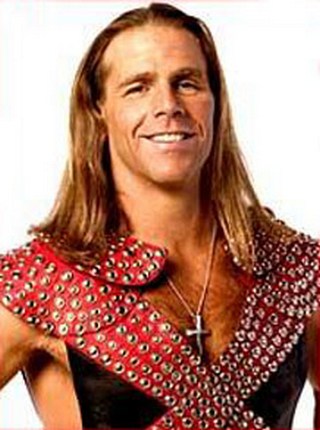 One of those wrestlers so famous even non-fans know his name and could probably pick him out of a crowd. His 25-year career has touched anybody who dares call themselves a fan, and he is headed to the WWE Hall Of Fame, which is probably the most important non-existent building you could ever hope to be enshrined in.

We’re not here to bash “Sexy Boy,” his long-time and unbelievably famous theme song. We may be dumb around here, but we’re not stupid. Sexy Boy is iconic and absolutely fits Michaels to a T. We can’t say the same about his choice of music before Sexy Boy:

This is “Rhapsody In Blue,” a George Gershwin-penned piece of torch music that fits Michaels about as well as him farting into a microphone would. It’s way too gentle and mellow for a guy with a “cocky ladies man” gimmick; it honestly works best during the ending of an old-school role-playing game. It could play while the hero embraces the lady he just rescued from the evil sorcerer, and it would make all the players weep. So for a love story in an RPG, it works. But for a big tough wrestler, it doesn’t even come close. 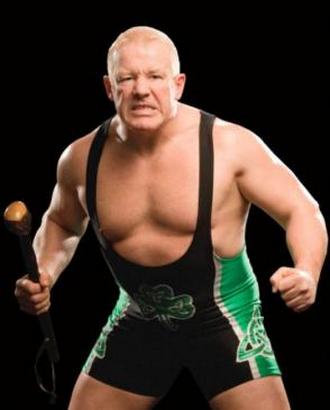 An angry Irish guy who lives for fighting. Not every wrestler could legitimately kick butt in a street fight, but Finlay would be an exception. He is legitimately tough and would likely destroy you. When it came time to get in the ring and only pretend to hurt people, he was quite good at that too, so he knew how to rein it in.

His first theme was perfectly fine, with pounding lambeg drums and Irish pipes setting the tone for a green-tinted beat down. But once he started hanging around a leprechaun and became a good guy, we got this:

This rough-and-tumble fighter got a jaunty, happy-go-lucky Irish jig, far more suited for his leprechaun son than for dear old Dad (yes, his son is a leprechaun. It’s wrestling, so just run with it, OK?)

For reasons that no scientist has been able to adequately explain, the leprechaun (Hornswoggle) is quite popular with the kiddies. Perhaps he reminds them of unhealthy marshmallow-based cereal. Either way, Finlay got his theme switched to Hornswoggle’s in order to associate him with the kids who love his son so much. Sadly, through a combination of the idea failing and completely neutering what made Finlay awesome, and Finlay himself being damn near 50 years old, Finlay retired from active competition shortly thereafter. His son is still on TV regularly though, much to the delight of children everywhere (not to mention the misery of adults.) 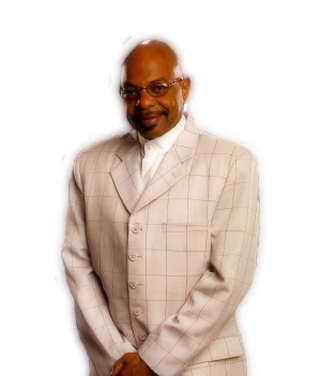 The General Manager of Smackdown, which means he’s the guy who comes out whenever wrestlers start to fight a little too much, yells a bit, and then forces the bad guy to face a popular good guy as punishment. “I’m angry at you for doing your job, and as punishment, I’m going to force you to… do your job!” That’s basically a GM role in a nutshell.

No, it doesn’t make sense; Long is 110 pounds soaking wet, not at all a gangster, and his character is a good guy! See, before he became the General Manager, he was a regular manager, and his final protégé was a guy named Rodney Mack. Mack was huge, muscular, and fit the gangster rap theme very well. In fact the song is named after him (Mack Militant). When you have a badass song named after you, you might want to live up to the reputation. 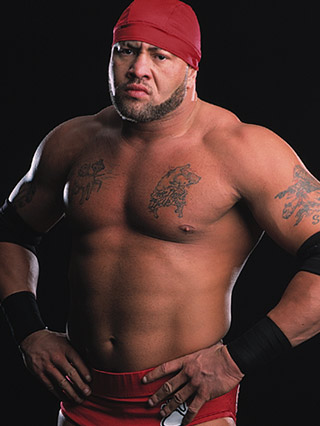 Well, he didn’t, as Mack got fired months later. But Long liked the song so much, he kept it for himself when it came time to be a nice-guy GM months later. Nothing says “run for cover” like a tiny bald man in eyeglasses, wearing an ugly suit at least one size too large, telling you that his “heart is as black as the blood in his veins.” And yes, that is an actual lyric; scared yet? 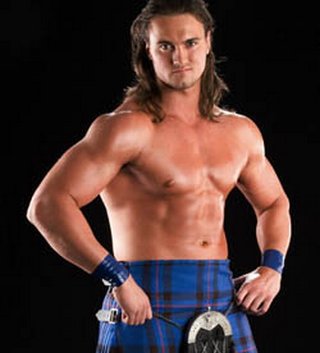 An angry Scottish guy, though not nearly as tough as the angry Irish guy we mentioned earlier. But he is unmistakably Scottish from that kilt, to his last name, all the way down to his Groundskeeper Willie accent that makes him impossible not to laugh at.

A late 90’s Metallica ballad that Metallica forgot to write.

It’s not an awful song, as far as songs go. There’s far worse out there. But why is a guy whose character is “I’m angry and Scottish” given a song we’re shocked Lars Ulrich didn’t sure over? Our best bet is that, in today’s age of actual bands providing theme music for WWE wrestlers, this one was bought and paid for by Vince McMahon, in the hopes that somebody would come along and suit the song just fine. When that didn’t happen, he said “to Hell with it” and just threw it on the latest newcomer to hold the Intercontinental title for a month and then get forgotten about. It’s a sound business strategy. 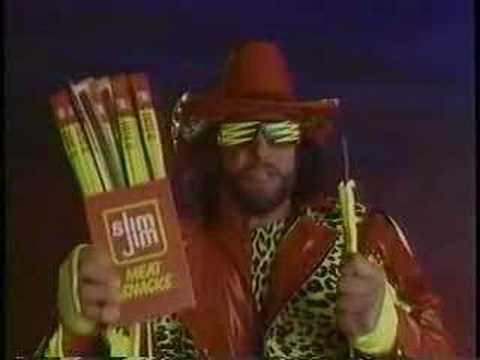 Yes, Pomp and Circumstance is iconic in its own way. Yes, you automatically associate Savage with the song. But… why? Why did he use this song? It is only used in one other form, and that is high school and college graduation. Savage’s character is basically a madman, hence the last name, and that doesn’t scream education. He definitely screamed a lot of things in his time, often while holding his breath, which made him sound eternally constipated, but not a whole lot about the value of learning. 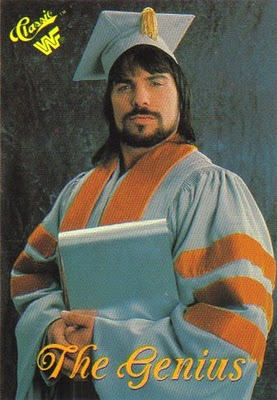 Interestingly enough, Savage’s real-life brother was also a wrestler, with the character of The Genius, a guy who acted smarter than everybody and was always decked out in college graduation robes. Why did he not use the graduation theme? It only makes perfect sense, but that might just be our main issue. It’s obviously futile to expect the pro wrestling industry to make sense, and we really ought to know that by now.