A wedding is a very special event in a person’s life. It’s an important moment that, at least in theory, is only going to happen once, so those involved usually want to make it as memorable as possible. Unfortunately, for every couple that pulls this off, there’s another one that confuses “memorable” with “retarded”, as these weird methods of matrimony painfully demonstrate.

“Till death do us part” is a classic phrase in most wedding vows, but some people seem to be in a real hurry to reach that stage. At least, that seems to be the reasoning behind gothic weddings, which combine the joyous celebration of marriage with all the fun and excitement of a funeral.

Often wedding themes fail because not enough work is put into them, leaving the ceremony feeling uninspired and tacky. However, this is a case of the exact opposite, where far too much time and money was spent making the bride and groom look hideous. Either the depressed couple are going to start living out The Addams Family, or their future children will run screaming from the room and straight into psychiatric counseling, the first time they see the wedding photos. 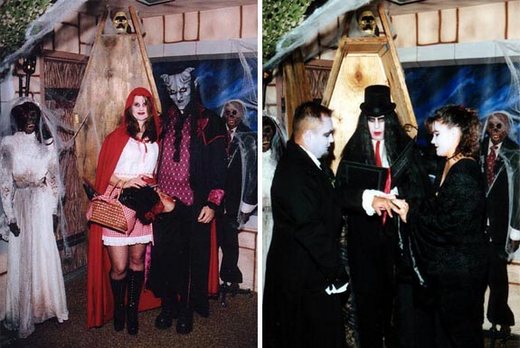 Now, most people will look at the photos from the gothic wedding and think that things went too far, but a select few say to themselves, “No, that’s just not messed up enough for my liking.” And then those people somehow meet each other and get married, as zombies.

Zombie wedding parties tend to be an awkward mixture of guests who also dress up and people who seem embarrassed to be within ten miles of the event. The former group then attempts to eat the latter, setting up year after year of awkward family reunions. Now, you may call us close minded for mocking these people, but if you have to pretend that your partner has been brutally slaughtered and turned into a mindless drone before you’ll consent to marry them you may not be setting yourself up for a healthy, stable relationship. 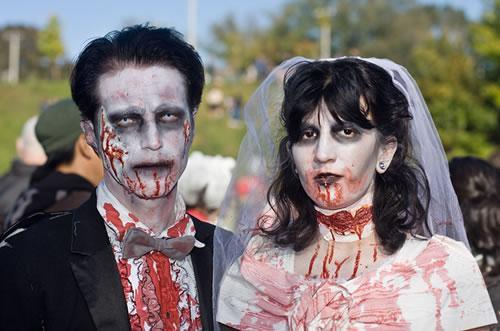 We understand that some weddings need to be held on a budget. Not every couple can afford their fancy dream ceremony, and so financial realities can often force people to get creative with their themes. Unfortunately, there’s a fine line between creative and stupid, and some themes toe that line with all the grace of a drunken hippopotamus.

That would explain the recent phenomenon of ghetto weddings, which take their cue from hip- hop culture. Because if there’s an art form out there, that really believes in the sanctity of marriage and the respectful treatment of women, it’s rap music. Not to mention the fact that this theme isn’t going to age well; unless rap music remains in vogue for the next few decades the children produced by these marriages will look back at their parent’s treasured memories and wonder just what the hell they were thinking. 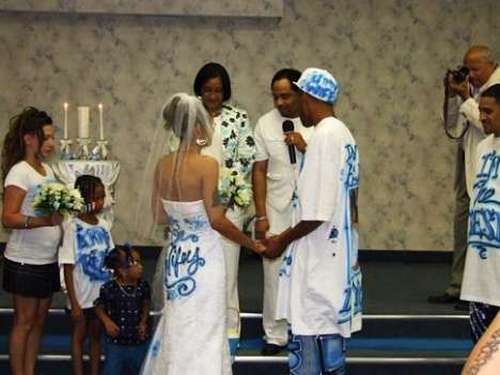 Video games are fun, and you want to have fun at your wedding. So following that tenuous logic, a video game themed wedding should be like, the greatest event ever! Unfortunately, bringing games into the real world tends to ruin their charm rather than enhance it, meaning that those who take part in video game weddings tend to look absurd.

Video game themes are surprisingly common, from innocent Mario to the explosion filled world of Halo. Despite their variety they all share one element; anyone taking part is going to look very weird. That doesn’t stop them from going all out with their theme though, which means you can find weddings full of people wandering around in plastic body armor and handing out (hopefully) fake grenades as favours. We’re not sure which is weirder, the theme itself or the fact that so much effort is usually put into it that it actually ends up being kind of awesome. 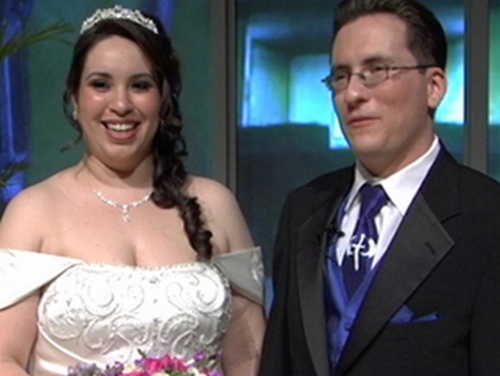 Everyone has a favorite mascot or fictional character. So why not involve them in your wedding plans? Most of you will be able to come up with very good answers to that question, but for those of you who can’t, you might be setting yourself up for something disastrous, such as a Hello Kitty themed wedding. Yes, from the wedding dress and tuxedos right down to the rings themselves, you too can coat your special day in pink, sugary crap. Hello Kitty is a mascot guaranteed to make your wedding so sickly sweet that every person who attends will end up with diabetes.

But the fun doesn’t stop there. Do you want a stupid looking fictional character to be involved in your wedding, but fear that Hello Kitty will damage your already rapidly fading masculinity? Then how about getting Sponge Bob Squarepants to serve as your best man? Nothing says manly matrimony like a giant, anthropomorphised sponge, and it’s the perfect option for guys out there who don’t have any real friends to fill the spot of best man. Plus, it totally justifies a casual dress code, because a huge sponge wearing a tuxedo would just look silly. 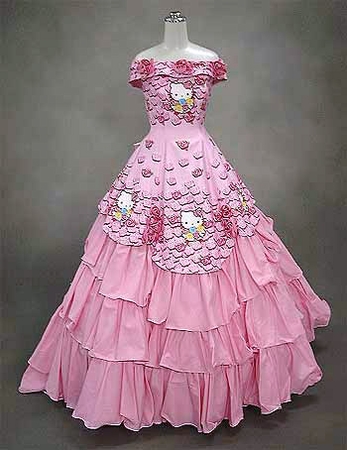 If you’re not familiar with Twilight (the vampire book series, not what happens before dawn and dusk), then you’re either living under a rock or are a very lucky person. Weddings based on popular books are common, such as Lord of the Rings and Harry Potter. Twilight deserves special mention though, because the romance in that series is already weird enough before you convert it to wedding format. If a bride’s idea of a loving man is one that stalks her and eventually performs a caesarean on her with his teeth (seriously, that happens in the books) then your wedding is probably going to be far more creepy than romantic.

That hasn’t stopped people from trying though. From using book quotes as wedding vows to coating the poor groom in glitter, Twilight themed weddings are here to stay. If holding a wedding based on an infatuation with a fictional romance that no real love story could possibly match up to isn’t weird, then we don’t know what is. We do know a vampire hunter themed divorce would be awesome though. 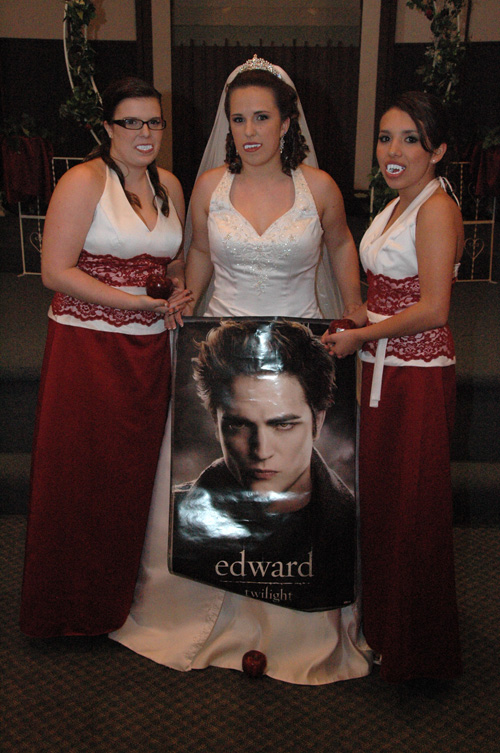 Now, when we say “on a plane”, we don’t mean that the wedding party and their guests are cruising comfortably through the air in a private jet. Weddings like that have been done, but that’s not too strange. No, what we’re talking about is the bride, groom, and an extremely dedicated pastor actually standing on top of a god damn plane. That’s exactly what one English couple did, as they tied the knot 1000 feet in the air while strapped to the wings of a trio of formation flying biplanes. 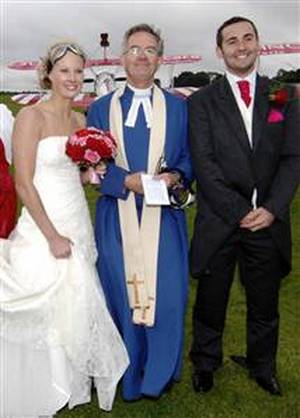 Now, the themes we’ve discussed so far have just been silly, but this one is actually going out of the way to be dangerous. If the line “till death do us part” can actually be fulfilled during the ceremony then you might want to consider toning things down a little. Hell, any wedding where the bride and groom need to be physically strapped down before things get underway is definitely going over the top. Sure, everything worked out fine in this case, but you just know that for each and every wedding anniversary they’re going to celebrate with an even more ridiculous stunt until they’re renewing their vows while wrestling alligators over a spiked pit or something.