There’s a statistic out there that says that out of the total surface of the world, everything on land has been pretty much explored to death. For Christ’s sake, there are even waiting lists to get up Everest these days. You might even be forgiven in thinking that there are no more mysteries left on the planet. However, only a small proportion of the world’s lakes and oceans have been explored, even with our bravest scientists on the case. This means there’s a wealth of undiscovered life waiting down there, creatures like…

The Phronima: a.k.a. The Grim Reaper 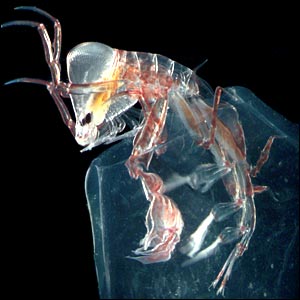 The Phronima is a deep sea arthropod which is nice and peaceful and doesn’t cause any harm to any other creatures at all. And if you believed that, we’ve got a bridge to sell you in Brooklyn. When you look like the living embodiment of what would result from a mating of the Queen from Alien and The Grim Reaper himself, you know you aren’t here to spread peace and love, only internal organs. This specimen, for example, pulls a total Han Solo and cuts open live jellyfish to take shelter inside it. Things take a turn for the horrifying though when it starts using the living tissue for a nursery, laying a couple of eggs. When the time comes for the eggs to hatch, the Phronima then tears its way out, and releases its bastard hellspawn into the water to bring about the end of the world [no citation needed].

The Diving Beetle: a.k.a. Leatherface, Minus The Leather 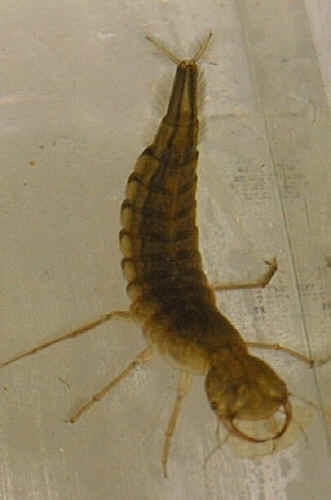 Without a shadow of a doubt, this looks like the worm that they removed from Neo’s stomach during the first (and best) film in The Matrix trilogy. And to be fair, we’d prefer that bastard to this thing as well. Why? Well, that would be because it has a nasty little habit of cannibalising its fellow beetles, by beating them to death, liquefying their internal organs, and sucking them out like a glorified Pepsi. All that’s left after an attack by one of these is the hollowed out shells of its ex-friends. Man, we thought Black Widows were the biggest assholes in nature; at least they never turned on their friends and ate them for a snack. Well, excluding the post-sex thing of course. 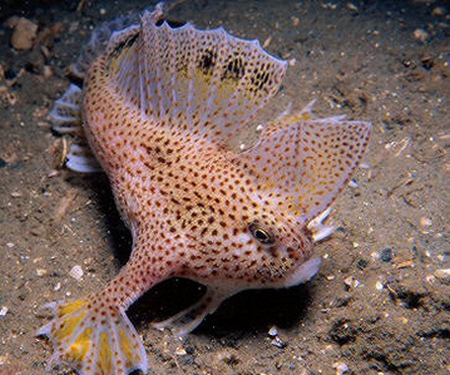 So now you know that it’s called the hand fish, we’ll give you three guesses why. And, no, it’s not because you can fit it into the palm of your hand, although by the looks of it you probably could but that isn’t the answer so we’ll move on. It’s because… it’s got hands. Technically, anyway. Well, they look closer to hands than what any other fish has, at least. Sadly, however, it doesn’t live anywhere near the Jersey Shore, a fact which has robbed all internet comedians (including us) of the chance to suggest that it only grew such a physique so it responds to the repeated requests for high-fives from… Big Tony… Snippy… dammit, whatever those idiots names are.

The Chimera: a.k.a. Cthulu, But Much Much Smaller 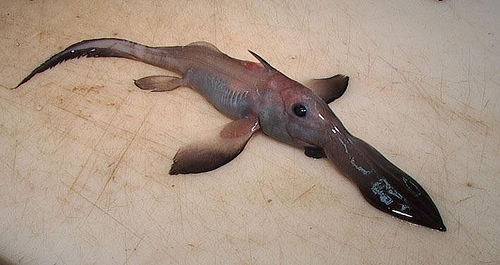 Yeah, now we’ve gone back to horrendous looking creatures that resemble something out of a novel that even H.P Lovecraft would reject for being too messed up. This particular brand of horrible is a Chimera, also commonly referred to as a Ghost Shark or Rabbit Fish. Personally, we prefer the first one of those two, because seriously?! A rabbit fish? In what incredibly messed up universe does that even resemble anything remotely like a rabbit? Sure, it is if you count the fact it has a heart and two eyes, but that’s it. All comparisons stop there. We frankly wouldn’t be surprised by this point in time to learn that it was originally going to be called the ‘Cuddle Fish’ because the scientific community that was responsible for naming this were the ‘special’ group.

The Pelican Eel: a.k.a. Batman If He Was An Asshole 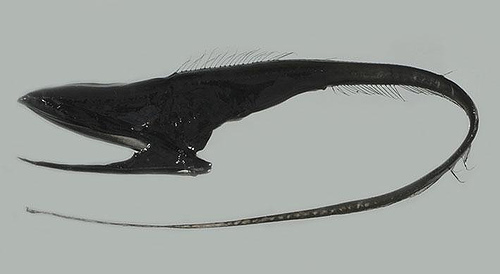 Nope, it’s not named for the fact that it’s an eel that can fly. Which is both extremely deceptive, and yet incredibly lucky because look at the thing. If we saw that thing flying towards us, there’s a good chance they’d be wheeling us out in crash carts. One Pelican Eel was also found to have swallowed an entire squid whole, so maybe there’s also a good chance that there wouldn’t have been any bodies to pack up. It also wouldn’t be a shock if the tail was found to double up as a blade and slice its enemies up whilst gliding past them underwater, just how a ninja would do it. The sneaky bastards.

The Dana Squid: a.k.a. The Shapeless Form That Will Eat You 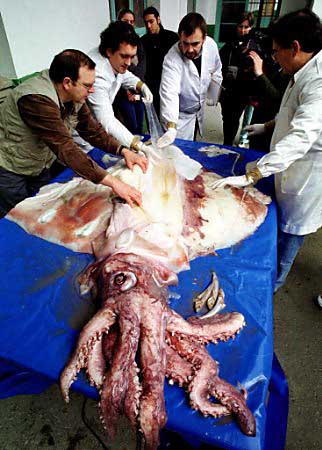 Incredibly, those scientists aren’t just fondling a huge pile of jelly there. That’s actually an animal, specifically the Dana Squid, named presumably after the stunning character played by Gillian Anderson whom matched the squid’s natural state of cynicism. Honestly, we don’t know, but that sounds like a better explanation than ‘the person that found it was called Dana’. Anyway, this thing manages to eat by blinding its prey by blinding with a massive flash of light (not by making them look at it, as we’d assumed). Sort of like the flashbangs that those unusually-talented gamers in Indonesia use to mercilessly slaughter you in every Call of Duty match you play against them. To stretch the metaphor, if we could call an AC-130 gunship on this, we goddamn wouldn’t hesitate for a second.

The Ocean Sunfish: a.k.a. The Smiling Cyclops 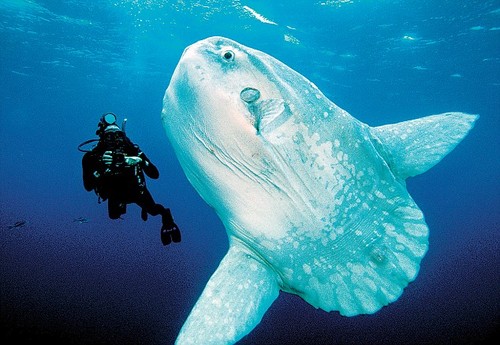 At first glance, you might look at this picture and think that the water is distorting the image a bit. Or that the animal is turned towards a weird angle, because… it looks like it only has one eye. Sadly, you’d be wrong. Although that’s probably a good thing because we don’t want that thing to have any excuse to go and wreak its terrible revenge against humanity. On the plus side though, it looks like it has a permanent smile etched onto its face. This animal is nothing more than a big bag of horrificness, not on account of it being able to kill you in a numerous amount of ways, but because you can’t help but look at the big stupid bastard and feel your heart break as you can’t end its miserable existence. 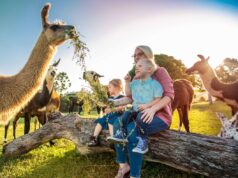