The ocean is a bastion of strange life forms, and because it’s so large we’re discovering new life forms all the time. Much of what we encounter looks very strange even by sea creature standards. Reasons for this vary, but one popular theory claims that because many of these creatures live much closer to the sea floor than others that they have either evolved differently or have been able to avoid factors that have lead to the the changes seen in the creatures we do know.

What follows are seven of the strangest creatures in the sea. Some are terrifying, others are deadly, but they all have one thing in common: they ain’t tuna.

Hey! You got pelican in my eel! You got your eel in my pelican!

Yikes. Yes, the pelican eel is actually an eel, and its mouth is huge, hence the name. Also known as the umbrella mouth gulper, this is a deep sea fish that’s rarely ever seen by humans. It does occasionally show up in fishing nets, however.

Growing up to a meter in length, the jaw alone makes up for a quarter of the total size. Loosely hinged, the jaw can open wide enough to eat fish much larger than the pelican eel itself (its stomach is rather accommodating to this unique feature). However, such extreme measures are rarely needed in the pelican’s daily operations. Its diet consists mostly of small crustaceans and its teeth are too small to chew much else. While you wouldn’t want to see this thing come flying out of your toilet, it doesn’t pose much of a threat to you unless you are a crab. 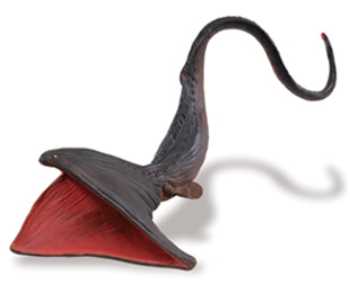 What happens to fish who are conceived under power lines? This:

Named after the charming placement of their eyes, stargazers just look flat-out angry. The upward facing mouth seems to say “Yeah, I was hit in the head with a shovel. Wanna fight about it?”

Living up to its creepy looks, the stargazer is a hunter that utilizes stealth and traps. It buries itself in the sand while waiting for potential prey to swim overhead. When the moment is right the stargazer strikes with a combination of venom and electric shocks, because poisoning something just isn’t fun unless you can cause severe nerve damage as well. If that weren’t unsettling enough, some species of stargazers have a worm-like lure growing from inside their mouths that they use to attract their prey. 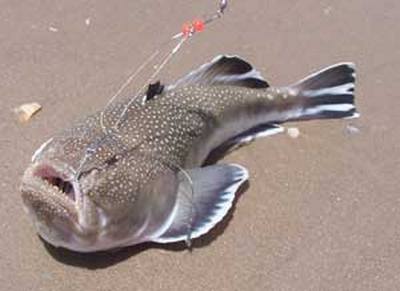 The name should tip you off right away that something about this shark isn’t quite right.

The megamouth shark is another rarely seen deep sea dweller. Discovered as recently as 1976, only fifty specimens have been seen and identified with only three of these recorded on film. You can assume that those numbers are accurate since it would be pretty difficult to see this:

And assume it was anything else but a creature of Satan’s design.

Despite its appearance, the mouth isn’t used for committing terrible acts of murder in the murky depths. Rather, the megamouth shark will swim around with its mouth wide open to filter the sea for plankton on which to feed. Not much else is known about the creature due in part to how incredibly rare it seems to be. They can grow to be up to eighteen feet in length and weigh over two-thousand pounds. Their jaws can open to one to three meters wide. Again, the chances of you being attacked by the megamouth shark (or even seeing the damn thing) aren’t great, but just stop and think about that for a few minutes and try not to scream in horror. 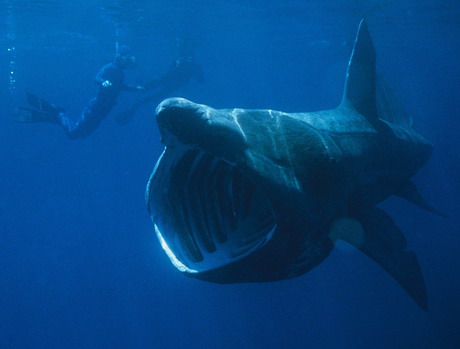 Standing high and proud at a whopping seven centimeters and wearing fifty to sixty tasteful blue polka dots; the blue ringed octopus isn’t going to win any fights through intimidation. Thankfully, that isn’t necessary since it’s one of the most venomous creatures in the sea.

The venom of the blue ringed octopus is created by bacteria in the salivary glands and is enough to kill an adult human. In fact, the palm-sized octopus carries enough venom to kill over twenty adult humans in a matter of minutes. The venom is capable of causing complete motor paralysis and respiratory arrest, both of which lead up to cardiac arrest. Oh, and there’s no anti-venom. 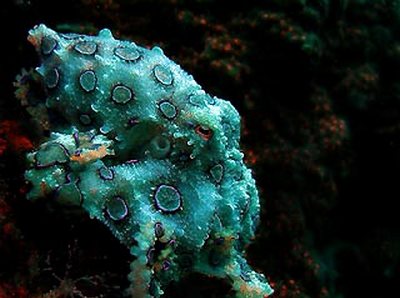 There’s a strong chance that Japanese cartoon pornography has ruined your perception of any creature that has tentacles. This, while ultimately scarring, is probably for the best.

The vampire squid more closely resembles a jellyfish than a squid. It does, however, live to its namesake. Fins at the top of its body resemble large pointed ears. Despite the body being six inches long, with another six inches of tentacles, it has very large eyes. The eight tentacles are webbed, linked together by black and red flaps of skin resembling a cloak. What’s more, the insides of the tentacles are covered in sharp tooth-like spikes. So yeah, there’s more than a passing resemblance to a vampire in this thing.

Having no ink sack with which to defend itself, the vampire squid will instead raise its tentacles up to create a sort of protective cloak with the teeth pointing outward. It has also developed an awesome means of catching its prey: two of the tentacles can extend to twice their normal length. Finally, the squid is covered with organs called photophores that can produce light. The vampire squid is capable of turning off these organs at will, practically rendering itself invisible in its natural depths. This may also mean that vampire squids beat Twilight to the sparkly vampire motif by simple virtue of existing. 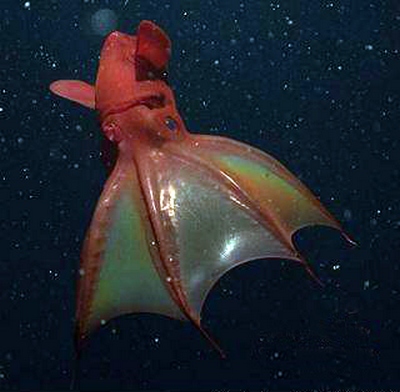 Yet another rare creature of the deep, the Dana Octopus Squid is among the largest squid species discovered. It is so rare, however, that it wasn’t filmed until 2005.

The defining feature of this squid is its ability to light up photophores on its arms. The 2005 footage shows the squid using this light to attack and disorient its prey with a dazzling show before promptly killing it.

The lights also serve as a defense mechanism as well. When attacked, young specimens will actually charge their attacker and flash their lights rapidly in an attempt to intimidate, blind or possibly trigger seizures in their enemy. 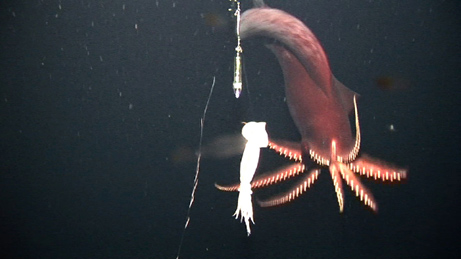 Despite the cute name this shark doesn’t look like a goblin so much as it does a switchblade knife.

Discovered by a Japanese fisherman during the late 1800s, the goblin shark is rarely seen by humans, and given it’s less than handsome appearance, no one’s complaining. The odd anatomy has a few cool secrets, though. First, electro-sensetive organs in the snout allow it to hunt where it normally can’t see (which is practically everywhere given how deep beneath the surface it lives). Second, the jaws can protrude and hide tongue like muscle that can literally suck its prey into its razor-sharp teeth.

Because of their unique shape, the jaws of goblin sharks can be sold for thousands of dollars. Despite this, it isn’t considered endangered or in danger of becoming endangered due to how rare it has proven to be. 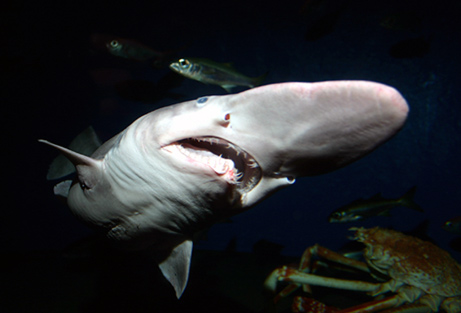