Some of you reading this are old enough to remember a time before the Internet had seeped into every facet of our society, threatening to choke out anything that was unable to adapt to a new, wireless world. For the youth in the audience, just know that it was a terrifying, uncivilized time where people only talked to other people who were near their physical bodies. Also, you couldn’t find out Snooki’s real name in less than 7 seconds while sitting on a bus. Suicide rates were naturally astronomical.

This pervasiveness of the WWW happened so rapidly that we as a society are still attempting to adjust and develop the social graces and etiquette that normally develop over time. This absence of precedent has led to abuses… areas where ever-present Internet connectivity has negatively affected or “ruined” formerly enjoyable activities.

What follows is a handy guide for identifying these problematic “social-activity-meet-internet” situations, as well as a few tips for avoiding them. 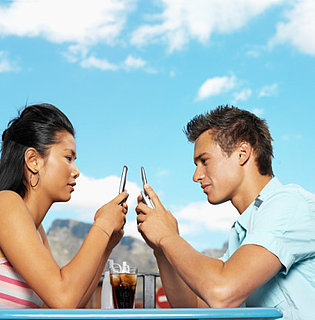 “So it says here you enjoy hair gel and ugly blue shirts?”

Hey you know what would be a terrific idea? If there was a way to make every aspect of your life available to potential partners, and then make every moment of your relationship available to your friends (and potentially, strangers).

To deny that Facebook has had a massive effect on relationships would be madness, and depending on how heavy a user you are, it may be hard to overstate it. People routinely “Facestalk” potential mates to get background information before dating. Entire courtships can begin exclusively through the medium. The discussion and stress over becoming “Facebook official” can be serious business. After all that, the service can hold any number of things that destroy relationships: evidence of inappropriate flirting, evidence of previous relationships, public airing of grievances, or just plain, old insanity: 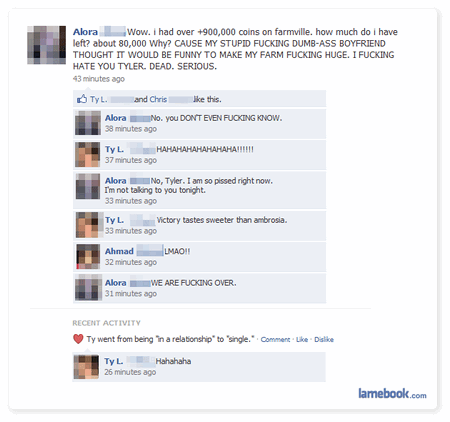 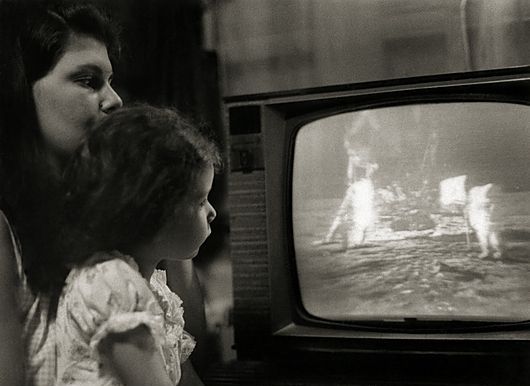 Take a look at the most watched TV events in US history. Only three took place in the last ten years, and they were all Super Bowls. In fact, the most recent non-sporting event to make the list is the last episode of Cheers, which was in 1993.

With the possible exception of sports (which can be easily ruined by overhearing the winner), people don’t care about seeing “big television events” as they happen anymore. First it was “tape it”, then “TiVo it” and now it’s “Torrent it”. Which makes sense, why structure your life around being on your couch at a certain date and time when you can watch it at your leisure from almost anywhere later? However, this does lessen the drama and excitement the events were intended to provide. Even heavily publicized events, like the recent Royal Wedding, tend to have a confirmed viewership of much lower than projected (in that case, 161 million instead of over a billion).

• Awesome viewing parties with some of those little hotdog things, • Acceptance. 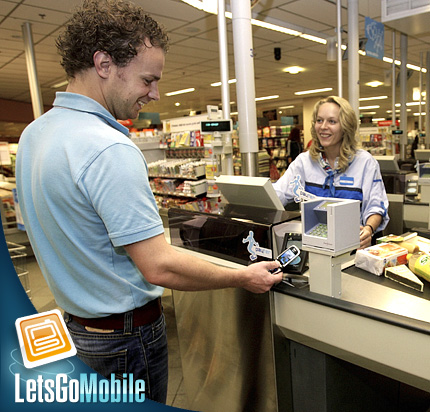 According to this, there are cheaper grapes across town!

Shopping, as a chore, has never been better thanks to the internet. This is the type of shopping typically associated with men. A need is identified (“I need a new camera”), research is conducted online by looking at dozens of camera reviews and user comments, and then a purchase is made from the online retailer offering the best price.

For those who viewed shopping as an activity, the “fun” has been systematically eliminated. Whether it’s by in-store consultation with your smartphone or not leaving the house at all in favor of buying stuff online, the activity has lost much of its lustre. Part of it likely stems from the guilt of knowing that you could have gotten whatever it is you’re buying for less if you’d taken then time to Google it.

• Make an effort to purchase specific items in person, such as clothing, • Limit your research to more expensive products that can be quantitatively examined, • Use your free time and saved money to buy more useless crap. 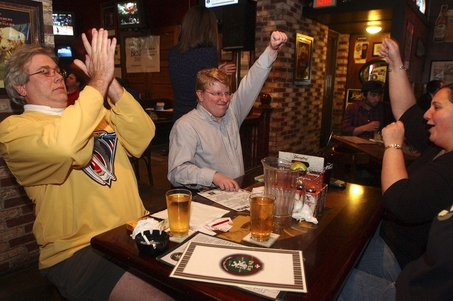 As the otherwise inexplicably long career of Alex Trebek can attest, people enjoy trivia. Maybe it’s for the camaraderie, for the competition or for the glorification of useless knowledge. The point is it’s a fun social activity in many forms, from trivial pursuit to pub quizzes.

If you knew the answers to all the questions, obviously there wouldn’t be much of a challenge. But for many the temptation of a world of information at their fingertips is too great. Googling or using Wolfram Alpha can give you an answer in seconds. Suddenly your buddy’s frequent requests to use the toilet in the middle of Trivial Pursuit become more suspicious, as does the guy at bar hastily scrolling with his cell phone under the table during “Name That Tune”.

• Strict “no cell phone rules” during any and all trivia contests, • Enact rules severely punishing cheaters and rewarding those that turn them in with delicious toffees, • Build giant Faraday Cages to enclose trivia contestants. 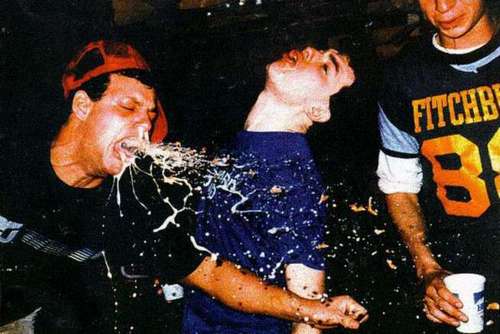 This guy will have a hard time running a Fortune 500 Company.

People love their alcohol. And while it runs the risk of crippling addiction, poisoning or vehicular homicide, we think you’ll agree that’s a small price to pay for the taste of a cold beer after a long day at work. People drink when they party, when they dine, when they relax and when doing hundreds of other activities from watching the game to taking a shower (try it).

While you used to be able to go out and get intoxicated and wake up with a mere hangover, the digital age has brought new perils to this great hobby. Friends who mean well often document evenings out with photos of your revelry, which make their way onto social media websites of all flavors. There they can be found by all manner of people, including your family, community leaders or employers. Then it’s just a quick jump to private or public shame, or even the unemployment line. Consider that many employers openly admit to screening potential candidates online first and that just getting your picture taken while in frame with a beer can get you fired in some cases.

• Lock down your privacy settings for any and all profiles, • Untag yourself in any and all unseemly photographs, for reference, anything wouldn’t want your grandma to see, • Hire bodyguards to mess up anyone who tries to take your picture. 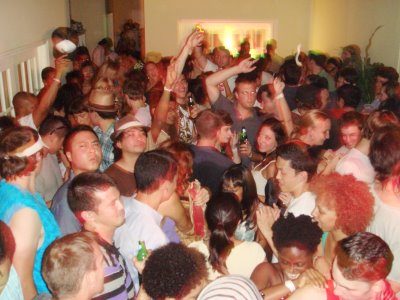 Yeah! This is the best Christening ever!

People like to let off some steam and have a good time. And if you’re going to get drunk and rowdy, the best place to do it is in someone else’s house. So it’s hardly surprising that people use the increased communicative power of the internet to spread word of shindigs like wildfire.

Recent years have seen an uptick in party crashers as news is spread by texts, Twitter and Facebook. Recently, one girl made headlines when 1600 people showed up to her Sweet Sixteen party thanks to an open event invitation of Facebook. An extreme example, but even a few e-vited ruffians can ruin an otherwise good time.

• Make Facebook events private or hidden because that is exactly why that option exists, • Make it clear that space is limited and the guest list is firm, • Invite people by actually talking to them. Yeah, your dubstep remix with 12 YouTube views has the place positively jumpin’.

People dance at parties and you need music to dance. Music also fills the silence and (along with copious quantities of alcohol) increases social lubrication. The important task of DJ at parties used to fall to the person with the largest music collection. With the widespread popularity of digital music, most people’s collections got larger, and for a time things had arguably never been better.

However, many people are now foregoing any collection in favor of on demand music sources such as YouTube, Grooveshark and other websites. In fact, the trend is to simply hook a laptop up to some speakers and give party-goers free access to the web. This might sound like a logical progression and a good one: virtually any song ever written becoming instantaneously available. However, instead of the person who took pains to gauge the feeling of the room controlling what’s playing, the job falls to the person who wants it the most, or is willing to be the biggest dick.

Instead of revellers dancing to elegantly crafted playlists, people sit and listen as songs leap from genre to genre, often becoming progressively more obscure and niche as alcohol and spite become larger factors. Tell-tale signs include people arguing over the existence of genres like “spacesynth” and “crabcore” and everyone crowding in the kitchen.

• Create a playlist and hide the location of the input cable, • Disable your wireless router, • Use an MP3 player instead of a full laptop, • Get better friends.

Have a tale of your box social ruined by the internet? Post about it in the comments below! Kevin Mack is a pariah that submits stories and personal tweets by carrier pigeon. He is easily vexed. Written by Kevin Mack – Copyrighted © www.weirdworm.com Image Sources