With vicious rumors going around this month, many people were outraged about the apparent impending doom of one of our most beloved cereals of all-time: Cap’n Crunch. This turned out to be a load of crunchberries: in truth, there was only question of whether the mascot (Cap’n Horatio Magellan Crunch) would be retired because marketing sugar cereal to kids is “wrong”.

And so we pine for our younger days when we didn’t know or care anything about “sugar” and “health” and “diabetes,” instead opting to just shovel down delicious gobs of goodness in a box, complete with a free toy inside that. Of course, not all cereals marketed towards kid-folk can be winners. As this list will illustrate; there are a lot of losers in the cereal world and cereal executives must have been smoking some sweet, sweet hash back in the day…

You’ve got to hand it to marketing executives for coming up with truly inspired product names. Of course, not in this case, since King Vitaman is about the most generic and half-assed “geared toward kids” cereal name we can think of. Perhaps the geniuses hoped that a child’s love of royalty would trump his distaste for the word “vitamins” and all things that sound healthy, and therefore icky?

Either way, when a child opened a box of King Vitaman he or she was sure to get two things: a mouthful of crowned shape cereal bits that no doubt did a number on the roof of his or her mouth and a hearty helping of vitamins and iron, whether he or she liked it or not. Smart money is on “not”.

Well wouldn’t you know it? There’s that whole “kids will eat anything if you slap something medieval sounding on it” thing we learned about with King Vitaman. Only this time, instead of a king, you’ve got a “Sir” and even that’s deceiving. Your first instinct is probably “knight,” but in this case you’d be wrong, because Sir Grapefellow was actually, apparently, a British World War I pilot.

The cereal was short lived, as you might imagine, and featured fake grape flavoring and grape marshmallow bits, which were for some reason in the shape of stars because, you know, nothing says fighter pilot like a star. Sir Grapefellow even had a rival, too, called Baron von Redberry, which was another General Mills cereal. Presumably the kids who ate Sir Grapefellow ran around the playground beating on the kids who ate Baron von Redberry for having such inferior cereal tastes or being loyal to the Kaiser. 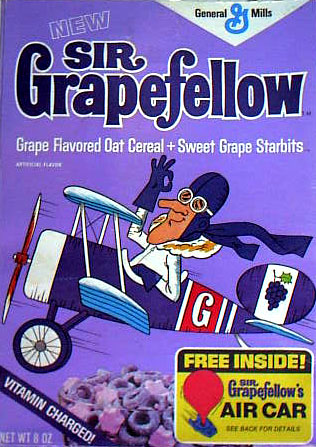 There are a few things wrong with a cereal like Mr. Wonderfull’s Surprize, right off the bat. First of all, that’s just atrocious spelling. But more importantly, the name suggests something terrible, like a guy in the park trying to show to your kids his “surprize”, rather than some delicious and nutritious breakfast food. And then, of course, you look at what the “surprize” is and see that it’s a “creamy filling” and, well, that automatically raises a few flags for us.

The concept actually isn’t that bad, really. It’s a chocolate cereal, which we can always get behind, filled with creamy chocolate, which we can also get behind. But come on, not one single person working on that cereal noticed the obvious and significant, if unintentional, double entendre at work here? “Here, kids, shove Mr. Wonderfull’s Surprize in your mouth! You’ll love it!” It was also available in vanilla, because they really had to hammer the point home with some creamy white filling. 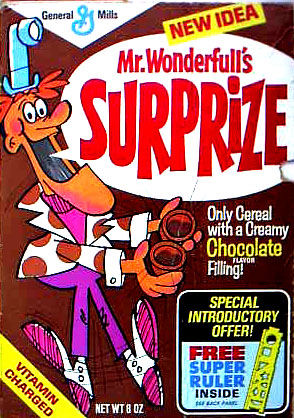 Well, we have to give these particular marketing people credit for coming right out and telling you that they’ve got a terrible, unappealing product right there in the name. Seriously, do “Crunchy Loggs” sound like something you’d enjoy pouring into a bowl and shoveling down your throat? If you ask us, they sound more like something that would shatter the bowl.

It doesn’t help that the mascot is a beaver, which makes it clear that these things taste like wood and you need to have the giant, powerful teeth of a beaver to chow down on them. Heck, based on that description you’d think that eating Crunchy Loggs would lead to an upswing on broken teeth, so we can only guess that dentists everywhere were pushing the cereal on kids just to drum up business. 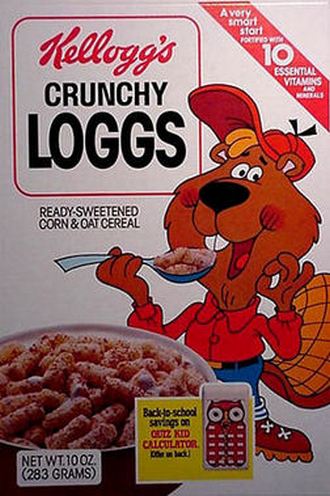 And the award for the Most Ridiculously Named Cereal, by far, goes to Grins & Smiles & Giggles & Laughs, which incidentally also gets the title of Most Redundant Cereal Name. The catchphrase for this cereal is that it’s “the cereal that smiles back at you,” which is just all kinds of creepy. Is that really what kids want, to eat something that smiles at them? We never realized children so enjoy eating things with human qualities.

Even more bizarre is the fact that, according to commercials, this cereal comes from the mouth of some sort of computer monster who spews this stuff out every time he chuckles. That’s right, kids, now you too can enjoy a nice steaming bowl of monster vomit! 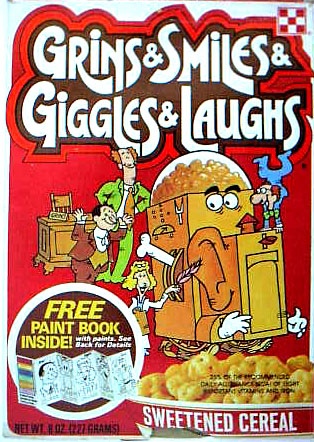 We could have done an entire list based on entertainment and video game tie-in cereals. There have been Nintendo themed cereals (Super Mario and Zelda, specifically), superhero themed cereals (particularly, a movie tie-in with the 1989 Tim Burton Batman film), blockbuster movie cereals (like E.T. cereal) and, of course, cartoon and celebrity cereals like Barbie and, perhaps most famously, Mr. T.

And we can get behind pretty much all of those, because for the most part they have long standing success and could have conceivably held up over time based on the extreme popularity of what they were based on. But seriously, Urkel-O’s? You’re telling us that what kids want is a cereal based around an overly ridiculous character on a cheesy sitcom with a shelf life of about five years? On the bright side, the cereal, unlike the show and the character, did not contain any cheese. 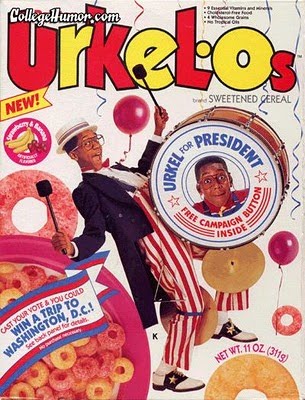 First things first: we are terribly relieved that this is not, in fact, a cereal centered around the former Buffalo Bills star and exonerated murderer, OJ Simpson. Of course if it was, we’re guessing that the cereal would turn the milk blood red while you eat it, and would rarely fit in the bowl. Can we get a rimshot? 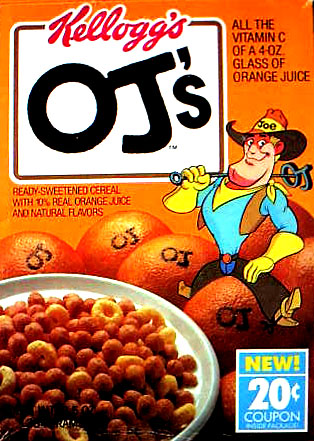