There are hundreds of lists on the internet detailing the weirdest foods the world (but mostly Japan) has to offer. They typically revolve around other cultures eating strange items, like haggis or unicorn. Other times, people combine foods in a way that just seems wrong. While entertaining and possibly a bit xenophobic, these don’t resonate with us completely because they are so alien. We’d never dream of eating animals alive, so it’s much less of a gross-out. In our effort to destroy everything our readers hold dear, we present a compilation of products that do everything within their power to ruin your favorite foods. 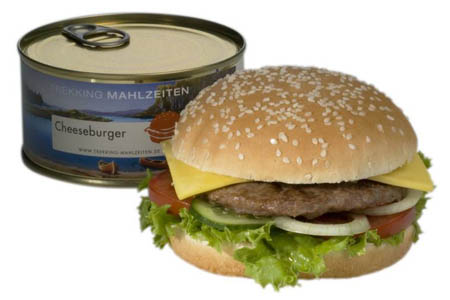 It takes some serious effort to make a McDonalds commercial look good by comparison.

The only thing more American than apple pie is the hamburger, or possibly a hamburger served between pieces of apple pie (coming soon to a Hardees near you!). It’s a fast food thing that Europe has never totally understood or embraced. Proof of this sweeping claim comes straight outta’ Germany, whose labors have produced a canned cheeseburger that even people stateside are having trouble swallowing.

Apparently it was originally designed for hikers and campers. This probably follows the logic that since the target consumers enjoy “roughing it” and “getting back to nature”, they probably want dysentery to get the full pioneer experience. “Reviewing” this monstrosity has become a bit of a fad on its own, even the folks at the Onion AV Club bellied up for some botulism. 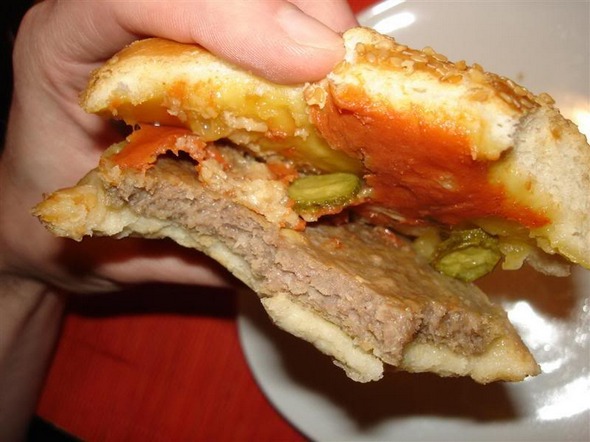 The reason half of OBGYNs burn out in the first year.

It’s like the Germans decided that just because they enjoy Scheisse videos, the rest of the world has to take a bite of this s*#t sandwich. 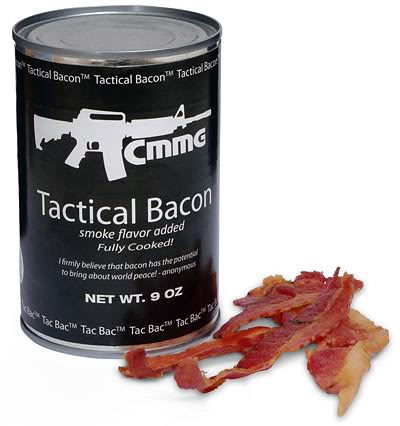 It holds 18 servings, in case you need to ruin 1 ½ dozen friendships.

Those readers that were able to stomach staring into the abyss of the canned cheeseburger may have noticed something important. Namely, those cheap Krauts neglected the most fundamental aspect of the American burger: bacon. We believe it was George Washington who said: It’s not a real meal without two kinds of meat. Maybe that was Jenna Jameson? Moving on.

Canned bacon is a necessary product because it fills an important niche. A Venn diagram of the target customers would be three intersecting circles: “people who own can openers”, “people who need bacon” and “people who hate themselves”. So, to be fair to the makers of canned bacon, the first circle is huge and the last two overlap a lot. In fact, this niche is so big; there are multiple manufacturers of canned bacon. 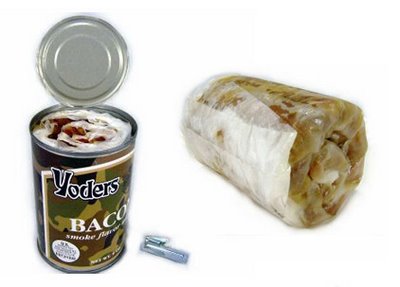 The consumers here also fall in the “lost will to live” circle.

There is an upside for the people too cowardly or intelligent to consume canned bacon: a feeling of reassurance while eating the old fashioned kind that there are finally worse things we could be consuming.

Eggs in a Tube 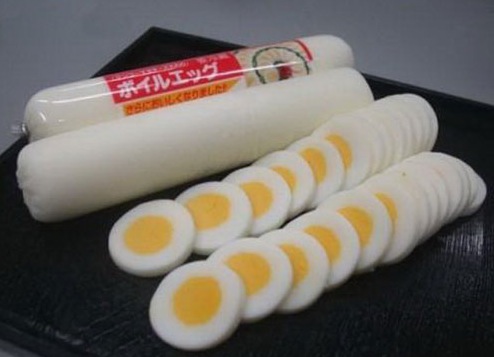 Looks like the Easter bunny had a full stomach.

They (the people who care about this kinda crap) have been telling us for years that breakfast is the most important meal of the day. And if there is any truth to that statement, then the makers of the Egg Tube should be arrested for crimes against humanity. Any attempt to consume this elongated monstrosity will most assuredly ruin your entire week, and probably a couple feet of intestine. 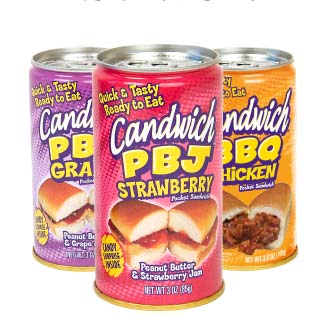 The makers can look forward to testifying in a string of child negligence hearings.

Who doesn’t love tucking in to a delicious sandwich? A mind blowing Monte Cristo? A delicately shaved roast beef? Heck, if the bread is fresh, nothing quite beats an ol’ fashioned PB&J. Can we get an amen?

The creators of the Candwich decided to take our love affair with the “two slices of bread containing other foods” concept and warp it into something that would be rejected from any credible canned food drive. Apparently the makers of the Candwich have also fallen on hard times, as it was revealed that their financier had stolen the money from a real estate scam.