In real life, assholes often don’t get what’s coming to them. Instead they get million dollar bonuses and awesome cars and to continue to own the Dallas Mavericks. Thankfully that’s not always the case in the movies. We figured the best way to tackle this topic was to delve into a decade which defined cinematic assholery; the 1980’s. Several of the most popular 80’s flicks featured assholes of epic proportions. These ridiculously obnoxious characters (bullies, jocks, rich folks, bosses, bitchy prom queens) were fairly common as they made for great antagonists and generally received some sort of punishment or humiliation. More to the point, their downfall was as assured as the horrible fashions or dated soundtracks. 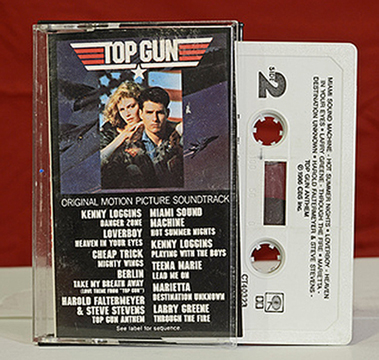 What? You don’t listen to this anymore? Your loss pal!

What follows are seven of the biggest assholes from 80’s flicks who ultimately got what they deserved. We’ll be rating their comeuppance on an exclusive (one to five) scale of vintage, Catholic paddlin’ sticks. Five paddles being the equivalent of the harshest lashing a brawny nun could dish out. 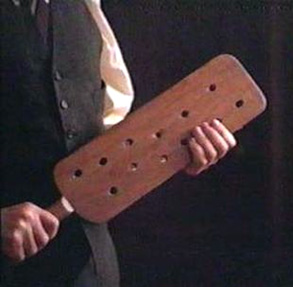 If you can think of a better symbol for swift splintery justice, let us know. 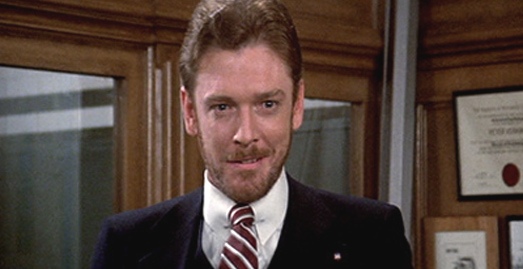 Let’s begin with a guy whose name reeks of douchbaggery. Walter Peck, as played by William Atherton, was the EPA agent of doom from Ghostbusters. How far did his assholish tactics go? Well for starters, Peck actually had the balls to challenge Bill Murray’s smug character in a pissing contest. Following that predictable failure, Peck proceeded to foolishly unleash hordes of previously contained ghouls onto New York City. The icing on the asshole cake was that he even managed to have the entire Ghostbusters team arrested for his blunder. 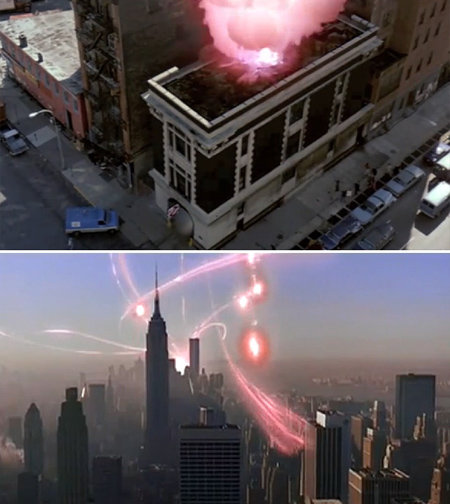 Although this nightmare was directly Peck’s fault, much like any true asshole, he certainly wasn’t taking the blame for it.

Well it’s not everyday you get called “d*ckless” in front of the mayor of New York and exposed for the tool that you are. Also, for good measure Peck had a thousand gallons of melted Stay Puft marshmallow dumped on top of his head.

The only way this could have been better was if he was allergic. 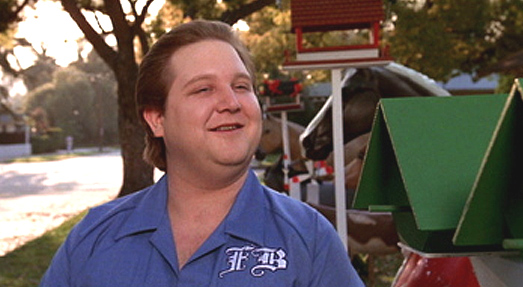 Francis Buxton’s unbearable character singlehandedly set fat people back decades. This rotund, spoiled man-child was the goofy foil to Pee-Wee from the movie Pee-Wee’s Big Adventure. Francis was responsible for stealing Pee-Wee’s precious bike and subsequently caused him to hit the road in a journey to retrieve his prized possession. 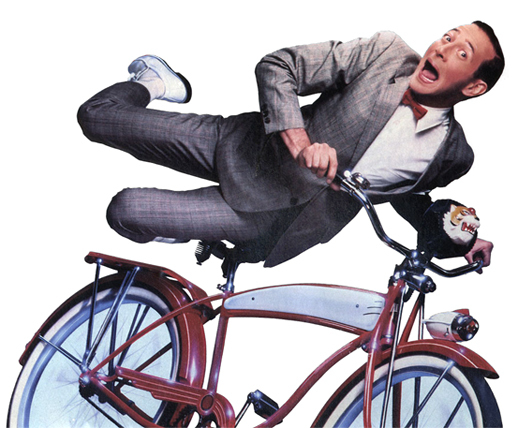 You must have a heart of ice to even think about separating this man from this bike.

At the conclusion of the film, Pee-Wee used his spring loaded bicycle seat to launch Francis into the air. Presumably to his grizzly death? A bit cartoony but under the circumstances, we’ll allow it. However, Buxton’s real comeuppance was the beat-down he took earlier in the film at the hands of an enraged Pee-Wee.

Think about this “battle” for a second. There can’t be anything more embarrassing than being pummeled by Pee-Wee Herman. That’s a humiliation Francis was forced to live with. Well at least until the fatal bicycle seat launch we mentioned earlier. 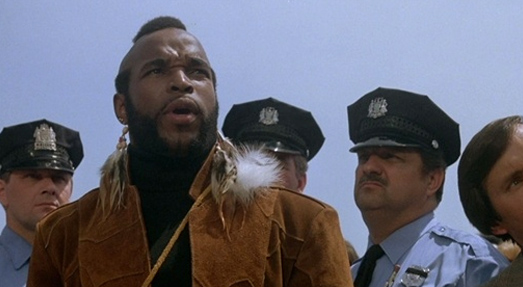 Clubber Lang, as played by Mr. T. in Rocky III was arguably one of Rocky Balboa’s most nasty opponents. Aside from his distinct mean streak he was also insanely arrogant. In fact, when it came to bravado Clubber gave Apollo Creed a run for his money. However, when it came to being a complete asshole, Clubber was a heavyweight champ. He spent most of the film trash talking and goading Rocky into a fight. He was also somewhat responsible for the death of Rocky’s beloved manager Mickey (pushing around heart attack prone elderly folks isn’t the best idea). As if all that wasn’t enough, Clubber even put the moves on Adrian, Rocky’s wife, in public.

Out of all six Rocky flicks there was no sweeter victory than Rocky’s 3rd round KO in his rematch against Clubber Lang. It wasn’t so much that Rocky defeated the big mouth Lang, it was how he accomplished it. Rocky essentially taunted and messed with his opponent so much that the easily angered Lang completely lost his shit. In the end, Rocky was able to outbox an exhausted Lang and sent him back to the A-Team with his tail between his legs. 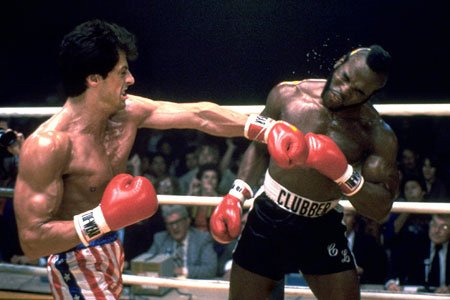 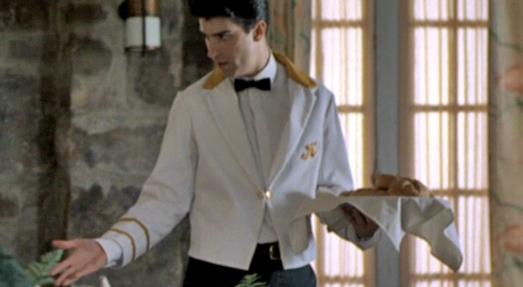 Robbie Gould, as played by the late Max Cantor, was a typical womanizing asshole from Dirty Dancing. Robbie managed to get himself on nearly everyone’s shit-list. He cheated on the main characters sister and subsequently knocked up another character named Penny which left Baby (Jennifer Grey) to pick up the dancing slack. Did we mention that Swayze’s character ended up catching the heat for that unwanted pregnancy which of course led to a midnight abortion? Robbie’s most famous quote regarding his assholish ways was “some people count, some people don’t.” That comment alone secured him a spot on this list. 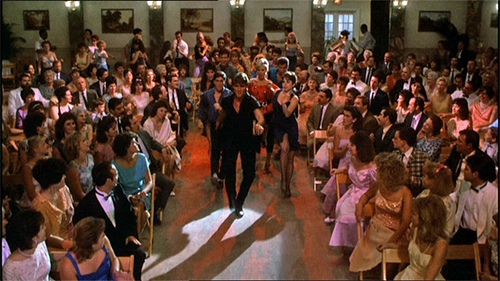 We’re going to assume Robbie owed money to everyone in this room.

In the end Robbie was exposed for what he was and given a thorough talking down by Baby’s father. However, Robbie also got what most every asshole deserves – a solid ass-kicking for all the damage he caused. 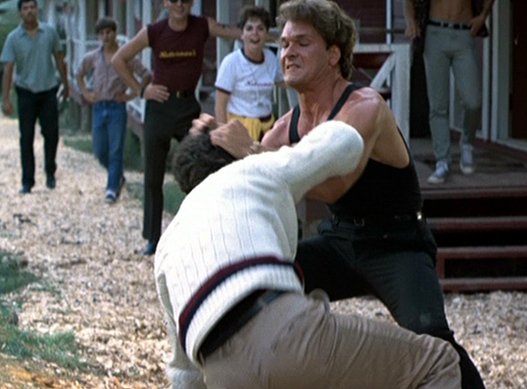 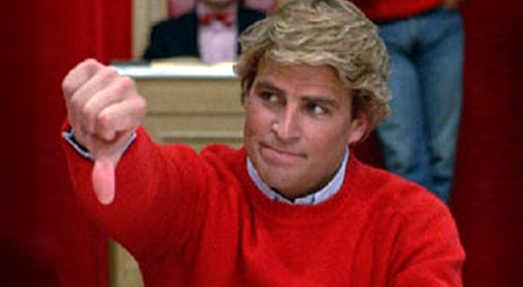 Were you aware that back in the 80’s nerds were not even considered human? Instead they were thought of as a comical sub-species who pretty much existed for the cool people to look down upon and scorn. Of course 80’s nerds were depicted as actual dorks, not just hipsters with horn-rimmed glasses like they are today. That’s where d-bag Stan Gable, (Ted McGinley) from Revenge of the Nerds enters the equation. Stan was president of the Alpha Beta Frat and when he wasn’t busy tending to typical 80’s jock stuff he apparently spent every ounce of spare time making life a living hell for nerds on campus. 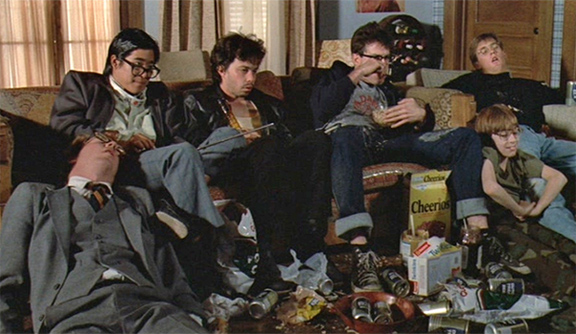 As if their lives weren’t rough enough.

How bad was Gable to the nerds? Well when he and his army of cliché jocks carelessly burned down their own frat house, they proceeded to “occupy” the home of the nerds which left them to live in the gym. Later, they tore apart the new home of the nerds, the same one they wrongly forced them to move into in the first place. The list of humiliations goes on and on. Hell, Gable and his pals even ruined a perfectly cool nerd weed party by inviting a few dozen pigs. 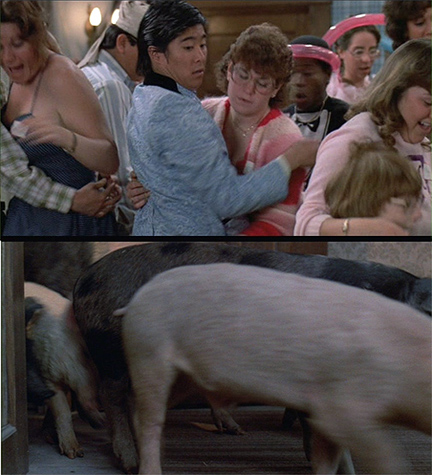 What’s worse, they all of which “had they cups but they ain’t chipped in”.

The movie wasn’t called Revenge of the Nerds for nothing. You see one thing 80’s movie jocks traditionally had issues with was being able to use their brains and think past 2+2=boobs. With that in mind it’s easy to see how the nerds were able to outsmart them in the end. And not just outsmart but also outclass and even steal Stan’s woman right out from under his smug face. 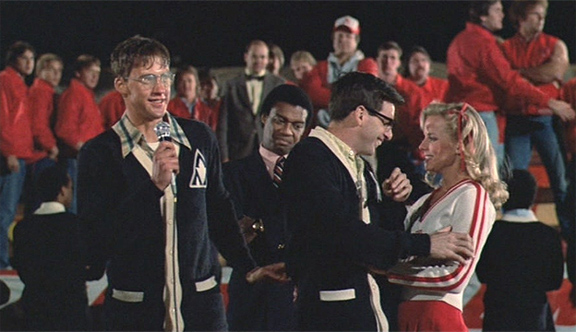 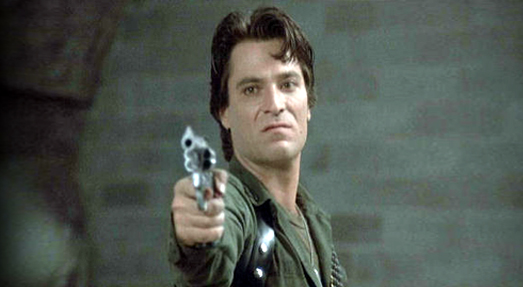 Intensely malicious military characters are a dime a dozen in war movies. However in the Romero zombie flick, Day of the Dead, Captain Rhodes, as portrayed by Joe Pilato stood well above the rest. Words cannot even begin to describe how malevolent this dude was. Captain Rhodes took the darker side of being an asshole to a whole new, shoot first, don’t even bother to ask questions later, level. We’ll let the following vid illustrate our point. After all, it’s best that you actually see Captain Rhodes in action if you haven’t before.

When Rhodes “monkey farm” was ultimately invaded by a mass of flesh eating zombies you can bet the undead enjoyed every last piece of the captain. His final words were “Choke on them!!!” referring of course to his entrails. 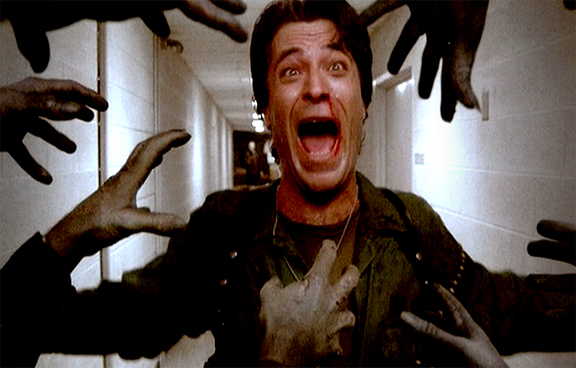 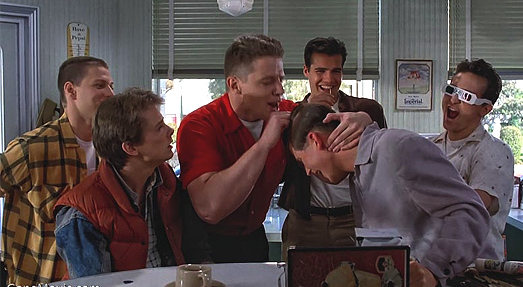 When bullies are in training they study Thomas F. Wilson’s character Biff Tannen in Back to the Future as a how-to guide. Biff’s assholishness was so legendary it continued on in various forms throughout the BTTF trilogy.

Apparently, the asshole gene is passed down through generations.

Biff was the blueprint for oversized 80’s movie bullies. Not only did he make George McFly’s life total crap but he even screwed with George’s son Marty just as much. In fact, Biff’s actions nearly caused Marty and his siblings to never have been born. Oh and lets not forget about Biff’s attempted rape of Marty’s mom. Yeah that was pretty nightmarish as well. 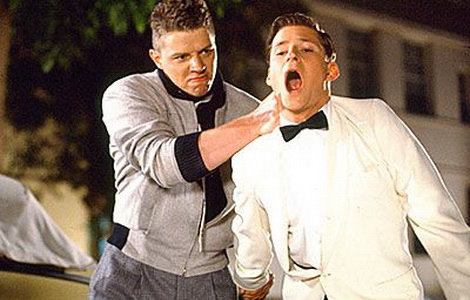 This is what George McFly gets for trying to prevent sexual assault.

Thankfully Biff got crapped on (literally) just as often as he dealt it out. The iconic knockout punch heard round the world of 1955 at the hands of George McFly is our favorite in terms of comeuppance. But nothing beats the fact that Marty and his father altered the timeline in such a way that “future Biff” ended up as a tracksuit wearing bitch for the McFly family. 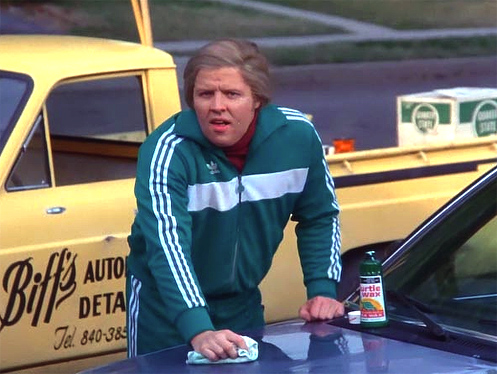 Just imagine if everyone who ever bullied you was doomed to a life of this.