It’s estimated that we haven’t really explored the oceans that make up 70% of this planet. Sure, we’ve dipped our weird-shaped toes in them and explored parts, but the vast majority remains unexplored. If you can only take away one thing from this article, think about how little we know and how amazingly awesome the photos we’ve gotten out of that are. And then think of what else could be out there that we could soon be cluttering up Instagram with… 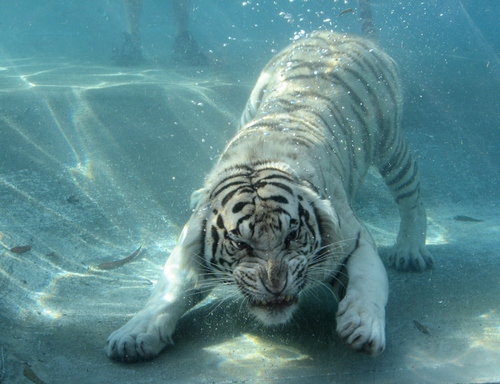 Imagine that, one day, you’re just a fish swimming happily along when suddenly a massive ball of white fur cannonballs into the water in front of you. You’re struggling to see what the hell that was, until the bubbles start to clear and you can see the white fur. Followed by a huge body. Followed by a large tail. Followed by a pair of eyes staring daggers through you. Followed by the huge set of teeth coming straight at you. So, yeah, did you know tigers can swim? 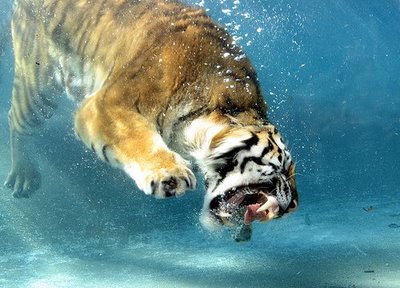 The only possible evolutionary reason for this ability is that Poseidon needed something much more aggressive than the pair of Lionfish he previously employed to guard his trident, and decided that out of a Great White Shark and a Tiger, these were the best choice. And he was kinda right. Also, just like a normal cat, you just know that this guy hates water, and since he’s surrounded by umpteen meters of it, he’s pissed and going to take it out all on you. 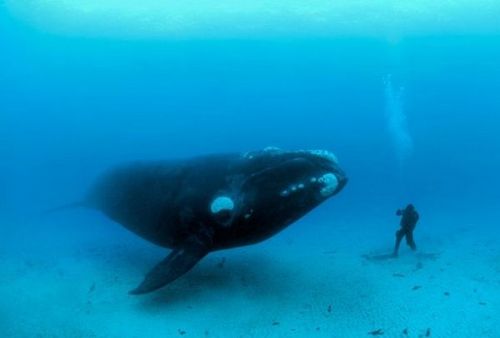 “Hey, aren’t you that diver guy who owes me $30 from the last time you were down here? You know, because apparently you needed ‘train fare’ back to the surface or some bullshit like that?” “No, you must have the wrong diver. You might mean Donny. That guy’s an asshole; you probably should be aware that you’ll never see him and that money again. You aren’t the first whale to fall that trick, and you definitely won’t be the last.”

Not Pictured: The Mini-Heart Attack This Guy Is Having 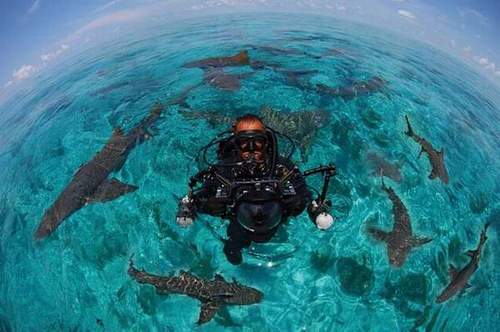 If this was us, to put it one way, we wouldn’t be calmly standing there whilst the circle of sharks surrounding us was growing ever-smaller and smaller. Our reaction might be more along the lines “Ahhh shit. Sharks” Sure, they might not prefer human beings for dinner but seriously. Sharks! Sharks everywhere! We guess this is the difference between us and that specimen of superman-ity pictured in that photo: he goes fearlessly swimming with sharks in his spare time, and we just sit and write about him all day.

The Children of the Coral Jesus, what is it with the bottom of the sea and creepy looking things? Obviously, however, these are statues and therefore are perfectly harmless. Of course, you also know that is completely bullshit if you’ve ever watched Dr Who. Go on: dive down to the centre of that circle, and close your eyes. The search and rescue party will never find your body. Or maybe they aren’t statues, because it looks like they’re wearing some sort of suits, which makes them the creepiest group of performance artists to ever exist. Still, we double dare you to go and dive down to the very bottom of the ocean and say hello to them.

The Cave of Really Sharp Spikes Admittedly, even we looked at this photo, and immediately thought “Bullshit!” The whole thing just looks like a sound stage for the latest James Cameron epic or Hollywood re-imagining of the Titanic (now with more spikes!). However, it isn’t because real life is sometimes awesome like that. Well, we’re thinking it is awesome, whilst the poor bastard left to swim through this minefield of impalement is hoping that his equipment doesn’t suddenly suffer a malfunction making him start to float or sink. It’s also worth pointing out that this photo was taken in the Bahamas, which makes us think: why didn’t the guy just decide to “meh, screw it” and go sip mojitos on the beach whilst getting fanned all day? This is proof that this guy is insane, and if he should ever end up in front of a psych board, we’ll be presenting this as evidence. 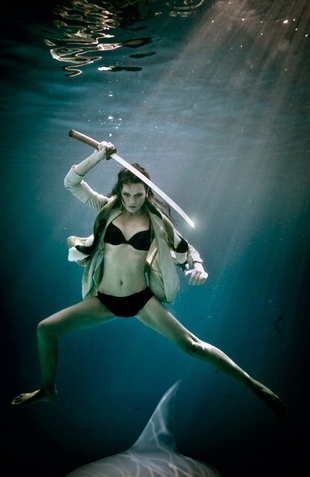 If you’ve ever clicked randomly on the internet at any point over the past few years, firstly you’re insane. Don’t do that. Your computer must have a ton of viruses and other nasty shit hiding inside it. Secondly, you’ve probably seen the painting that someone did of Batman wrestling a shark and trying to stab it in the head with a lightsaber whilst the beast is trying to bite his bat-cowl off. Don’t worry, we’ll wait whilst you go Google it. Done? Great, now our Majesty here is done, well continue telling jokes (allegedly). This photo is the living embodiment of that image, and frankly this is the only time where we think making anyone dress up as Batman would ruin it. If anything it could do with more shark, but that’s a bit self-entitled to ask for the person in the picture to swim a bit closer to the beast that could probably eat her inside of two bites. 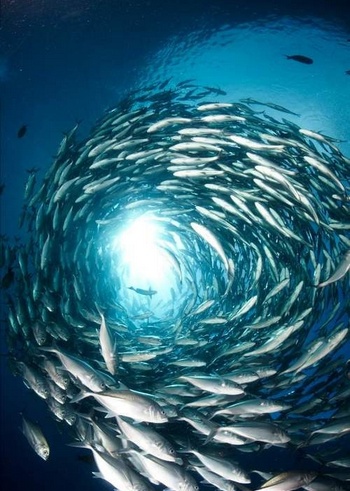 Being a website run almost exclusively by nerds who obsess over pop culture and random factoids for a living, it’s impossible for people like us to look at this image and not imagine this as the opening sequence of Dr Who. Which we might have already mentioned once during this article, so at least you know something about that now as well, huh? If you don’t know what the title sequence is, it’s a swirling vortex of shapes and colours, sort of like what these fish have done here. However, the only element that appears to be missing is the blue police telephone box hurtling down the centre, but we guess that might be a bit much to ask of a group of fish. Frankly, we’re just impressed by what they’ve done here, so we’re going to start the fuck up and imagine the Daleks and stuff.