Star Trek : Into Darkness seems to be taking a lot of cues from Christopher Nolan’s Dark Knight trilogy. If you need proof, check out the overall tone of the trailer as well as the initial movie poster. Unfortunately for some, this means that a lot of the campy silliness that the original crew met in their original voyages might be going the way of the Dodo. As much as we would like to see them portrayed with gritty realism, here is a hint of what they will probably never film. 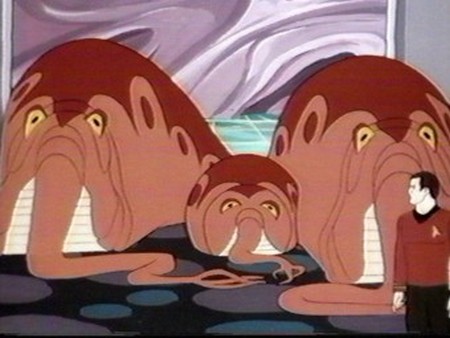 “Bring me a comely Ensign and have her fitted for a metal bikini!”

They looked like a cross between Sesame Street’s Mr. Snuffleupagus and Jabba The Hutt. The Lactrans of Lacta VII (not to be confused with Futurama’s denizens or Omicron Persei VII ) were only featured once in the Star Trek Universe. The lone appearance was in the animated television episode Eye of the Beholder. The animated series also featured some alien who could detach and re-attach limbs at will. We don’t even want to think about what that would have led to in the bedroom. Personally, we’d loved to see Lactrans brought to full gritty glory on the big screen. We are just kind of scared that they would end up looking like that huge vagina type monster from 1984’s Dune. This is probably a concern shared by the film makers (if they even know what a Lactran is). 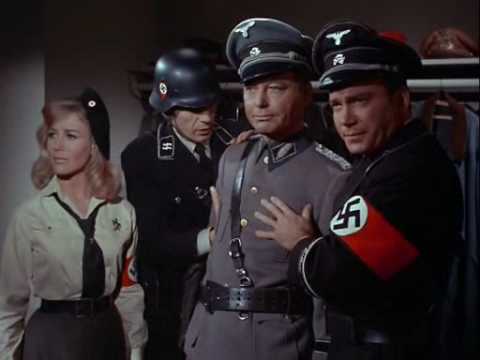 As dapper as Chris Pine, Zachary Quinto, and Karl Urban might look in those uniforms, we are guessing that you will not be seeing them any time soon. It’s a shame. The 50th episode of the original Star Trek series ( titled “Patterns of Force” ) featured the most unworn shirts per capita of any episodes. Apparently, the first thing that you do in a Space Concentration Camp is take off your shirt. It encourages a certain uniformity as well male on male sex with other prisoners. In theory, the Federation officer who modeled a space society after National Socialism still exists; we just don’t think they will be visited any time soon. 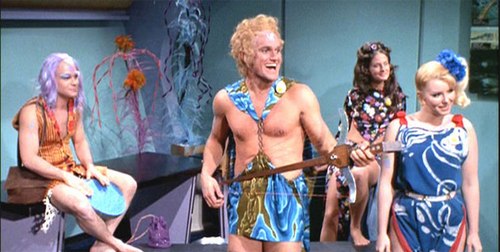 “Love is free, man. Space is free. Its these costumes that we had to save up for. “

Again, we are personally all for watching Zachary Quinto make the ‘one’ gesture to show that he is down with the cause. We are also interested to see what little ditty they could make up to insult Chris Pine’s Captain Kirk. Conversely, we could listen to Space Hippies call Kirk ‘Herbert’ all day long. Dr. Sevrin and his followers first (and only) appeared in the original series episode ‘The Way To Eden.’ The group was looking for a perpetual pleasure planet and their leader had some sort of virus. We are guessing the message here is that green women carry the space clap. We might not want to be too hasty on this one. This is brought to you by the same guy who did Felicity and Lost. 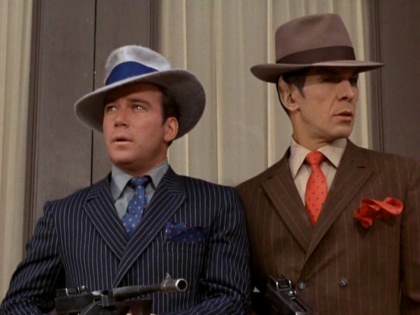 “It’s so beautiful… yet so gangsta..”

A Piece of the Action was about as close as the original Star Trek series got to the plot of the later movie Galaxy Quest. The Sigma Iotians (who really sound like they should have started a frat gang and followed Cassanova Frankenstein) were imitating a book left behind by the crew of a ship called the Horizon. The book just happened to detail the lifestyles of 1920’s era mobsters. Unfortunately, this means horrible things for the horse population of Sigma Iotia as well as exorbitant bed cleaning bills. The interesting part is that Deep Space Nine was actually planning a sequel to A Piece of the Action in which the Sigmas planet now modeled their society after Kirk’s enterprise. Incidentally, that would have been exactly the plot of Galaxy Quest. This line of thought will not be explored in the new film series. Again, this is a shame. 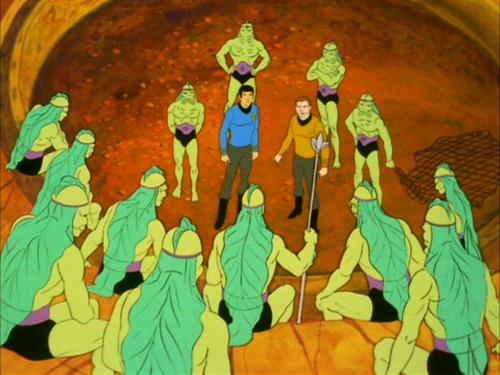 “We are mistrustful of surface dwellers… unless of course they are dressed like WWE wrestlers.”

In the animated series, the original crew met a race called The Aquans. The title of the show was called The Ambergris Element. Considering that ambergris is a real thing which essentially amounts to whale vomit, you might get an idea where all of this is going. Kirk and Spock were turned into water breathers and turned back. First, they had to go the Aquans underwater kingdom and plead their case. Other than a ridiculous appearance (even by Star Trek standards) there is the minor issue that this entire scene has already been put to live action (sort of) in science fiction. There seems to have been some sort of rule established that you do not want to go around imitating Star Wars Episode I: The Phantom Menace (especially in regards to any reference to Gungans or Jar Jar Binks). In that vein, we think that the Aquans and their underwater kingdom will remain undisturbed in the current theatrical universe.

“I understand you like to do it. I love to do it myself. All I am saying is that some protection is required.”

Any serious look at the Star Trek universe in its early settings will more than likely not base an entire movie around angrily repopulating furballs. Besides, if there is any unnecessary breeding to be done, we believe that it is in Kirk’s contract to do so. The trouble with making fun of The Trouble With Tribbles is that it is almost universally loved. We are not entirely sure why multiplying furballs get a pass in Star Trek when there seems to be some huge problem with Ewoks in the Star Wars universe. Unless someone puts in a sly one off joke about a furball being sold at a marketplace, we are pretty sure that the Tribbles will only continue to multiply in re-runs. Cuteness and all be damned. 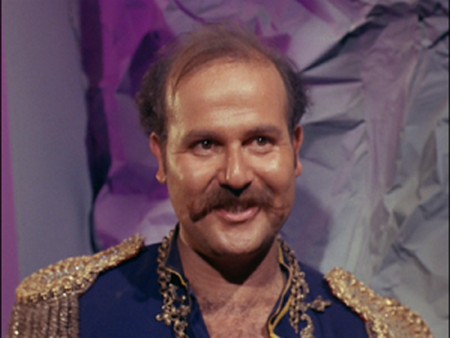 This one is half acquiescing to the fact that Harry Mudd will probably never be seen in the annals of Star Trek again. This is also half a plaintive plea to in some way make it so. Mudd was, without a doubt, the most fun and extravagant Star Trek villain. Mudd was the only one ever brought back twice. Mudd was perfectly capable of outsmarting the Star Trek crew. Mudd was also equally adept at tinkering with Star Trek’s version of Austin Power’s fembots. Mudd was a glorious planner and a thorn in Kirk’s side. After all, if you can have Star Trek movies devoted to saving the whales and searching for Heaven, then there is no reason not to bring back Harry Mudd. For the record, Will Ferrell or Steve Carell would be absolutely ideal for the role. In a pinch, we would even take Vince Vaughn. They won’t bring back the proto – Ron Burgundy in the new series. We are just saying that they should.