Ever since the first caveman lifted more mammoth feces than the rest of his tribe that one time, mankind has been in a race to show off just how strong and totally awesome it is. To this effect, countless men and women honed their bodies to often abnormal states over the years, participating in shows of physical prowess that often bordered on the batshit insane. And here are six of those people: 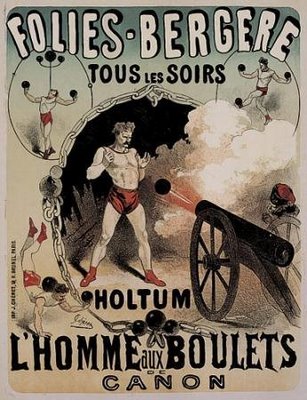 John Holtum was one of the first cannonball men, that is, people who looked at cannons (the weapons of mass destruction and explosive power), and said to themselves “Yeah, I can totally take that bitch on.” Holtum’s strongman shtick was simple: Someone fires a canon at him and he catches the cannonball with his hands, taking the impact unto his chest, the greatest proof that “simple” rarely equals “easy,” or “sane” in this case. The original plan to shoot the cannon at his massive balls was eventually deemed unfair to the cannon.

The feat required enormous strength and reflexes because, well, do YOU know how fast a cannonball travels? We don’t so we’re hoping you can fill in that blank yourself. We think it’s pretty fast though. And that’s why Holtum performed his trick all around Europe and even on royal courts, because it’s just that awesome. And hey, if he failed, a bunch people would have paid to see a man executed by cannon. It’s win-win for everybody.

[Full name not available at this time] Right, so John Holtum was a pretty strong guy, but what we didn’t mention before is that the cannonballs fired at him were usually lighter than the battlefield ones and the canon did not use as much gunpowder. So his accomplishments were really just having a pretty strong physique and good reflexes. The Indian woman Rajvinder’s feat is therefore more amazing because SHE managed to pull an entire truck with nothing but her teeth. And those are really hard to put muscle mass on.

We do not know a lot about Rajvinder, other than her YouTube video, which of course means her teeth act is totally legit, otherwise it would never be allowed on the internet, right? Right. There really isn’t much more one can say about this Iron Jaw Indian other than that she rocks and we hope for her husband’s/boyfriend’s sake that she’s not a biter. 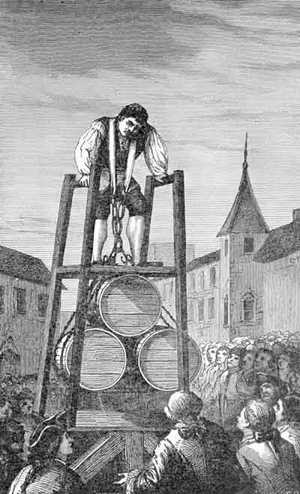 Thomas Topham (“Goodpork” to his friends) was an 18th century English strongman famous for shows where he generally carried lots of heavy stuff which wasn’t usually carried by hand, including horses (holy crap!) His most famous feat was allegedly lifting 3 barrels weighing in at nearly 1400lbs and later lifting over 200lbs with just his little fingers. OK Tom, we get it, you’re a strong guy, but now show us something that will really make our jaws scrape the floor.

Well, we did ask for it: During one of his shows Thomas Topham lifted a massive, 6-feet long oak table… with his teeth. We could not find evidence that both Topham and Rajvinder were trained in the art of Teeth Bulking by the same, apparently immortal, world traveling sage, but still think it’s the only explanation that makes any sense.