Driving your car around town is pretty tedious, walking takes forever to get anywhere, biking or skateboarding makes anyone who isn’t a teenager look weird and public transit is full of hobos. Is there no method of everyday transportation that’s both efficient and enjoyable?

Nope, there isn’t. Trust us, we checked. However, there are plenty of extremely weird methods that make up for their inefficiency with their complete lunacy. So the next time you’re stuck in an hour long traffic jam and the stereo in the car next to you is blasting “Dinosaur” on repeat, you should consider one of these alternatives.

Did you ever own a pogo stick as a child? Did you ever want to take your pogo stick to the extreme?! Well, probably not, because those things got old pretty fast, but regardless of what your childhood fantasies were, Powerisers are here to maybe answer them.

Powerisers are pretty much just springs that you strap to your legs, essentially turning you into a kangaroo. Except that kangaroos can’t do bitchin’ flips or suffer hilarious groin injuries.

The company that sells Powerisers says they were originally developed by the aerospace industry, and while we find that claim dubious, we’re too busy filling out the order form to investigate so we’ll have to take their word for it. Sure, anyone using these things for an extended length of time will probably end up with a bad case of broken spine, but it would be worth it for the ability to get to work by doing front flips over all the cars that are waiting at red lights. 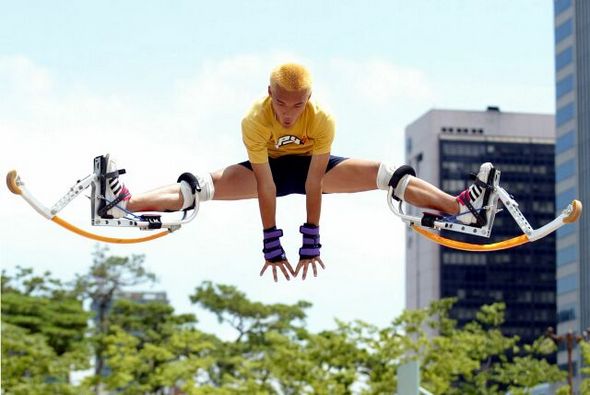 The Champiot Ultra is a vehicle that combines all the physical labour of rowing with none of the natural beauty of being on open water. So if you’ve ever wanted to row through smoggy downtown traffic then you need to get yourself one of these babies. Plus, since the ad for the Champiot uses hip music in lieu of actual information, it pretty much guarantees that you’ll look cool when you’re riding it. So what are you waiting for?

The makers of the Champiot claim that it fills “a tremendous vacuum in the exercise market” by providing an “interesting alternative to going to the gym or jogging around the block.” The 1000 dollar price tag seems pretty steep for an “interesting alternative,” but then they also claim that this thing can be used on sidewalks, bike pathways, parks and beaches, so really it’s a small price to pay for that kind of stunning versatility. Unfortunately, it doesn’t appear to be fit for actual roads, but if you’re willing to fork over all that money in the first place you probably aren’t the sort of person who would let minor technicalities like that stop you. 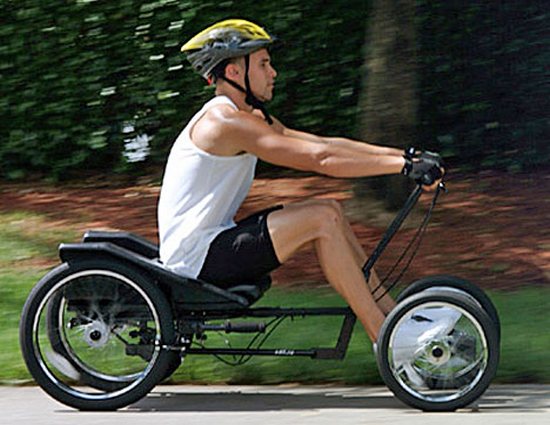 If there’s one form of exercise even more tedious than rowing it’s running on a treadmill, so naturally someone decided to make a vehicle based around it. Now you can combine the intensity of a treadmill workout with the convenience of a bicycle, and you can get it for the small cost of looking like a complete idiot in public! (Also, you’ll need 2500 dollars.) But hey, if you don’t believe us, then just let this poorly made commercial do the talking!

OK, so all this Frankenstein monster really seems to do is make jogging needlessly more difficult, but at least now you can gain the respect of people who own cars. Not their actual respect, mind you, we’re just saying that legally they won’t be able to run you off the road. That probably won’t stop them from trying though, so be sure to wear your helmet when you hit the streets with your Untreadmill, The Vehicle That Should Not Be™. 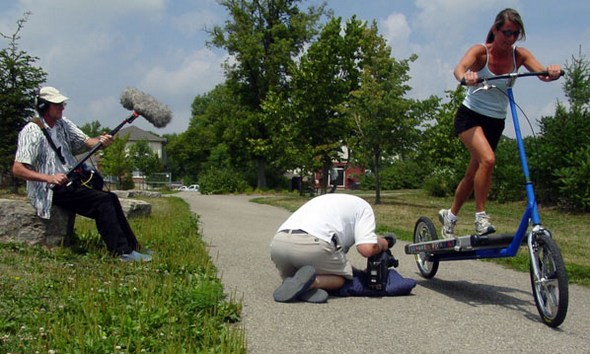