Originally, superheroes would appear in comics doing supernatural things and this was considered thrilling enough. Nowadays superheroes spend most of their time dealing with “issues” and being edgy. Between these two trends was a very dark time… when superheroes did everything we do… but SUPER.

Let’s just say that in the modern vernacular, Superman would fall on the more ‘liberal end’ of the spectrum and Batman would probably fall on the more ‘conservative’ end of the spectrum. These words have actually lost all of their classical meanings. Liberal does not merely mean ‘more government’ and ‘conservative’ does not now mean ‘less government.’ The classic idea of a liberal is now a pro-choice pro-homosexual tree hugger with no job looking for a government hand out. Conservatives are now seen as Puritanical as well as tyrannical money-grubbers who will step over anyone to make a buck. In Tolkien’s world, their two sides would be represented by Elves and Dwarves. In the modern American Mythology of comic books, we are looking almost exclusively at Batman and Superman. 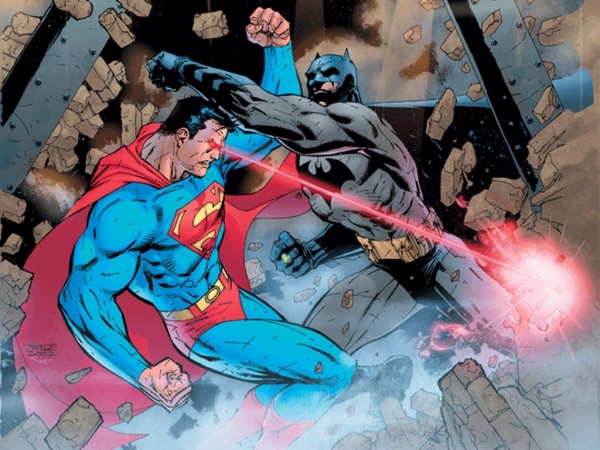 “Let’s review Bruce, I went to college, not to prison.”

“Clark, you do realize that every one of those that says ‘Wayne Enterprises’ is getting added to your Justice League dues … right? Over.”

Just to review for a moment. Batman’s counterpart Bruce Wayne owns a company that makes weapons that blow people up. As a matter of fact, most of the plot of the Dark Knight Rises is built up around this very single notion. Superman tends to throw away things that blow things up. This would be most of what passed for a plot in Superman IV: A Quest For Peace. No Batman movie has ever included the word ‘peace.’ Batman’s take on national security is akin to Nicolas Cage’s character in the brilliant movie Lord of War. With everyone on the planet already armed, the main question is how to arm the rest. Keep in mind that Batman does actively hate personal handguns. If you are going to fight, you had better do it with ninja training, full-body armor, explosives, and a tank. Superman would go from door to door and use heat vision to melt your guns. They did not have the Second Amendment on Krypton apparently. 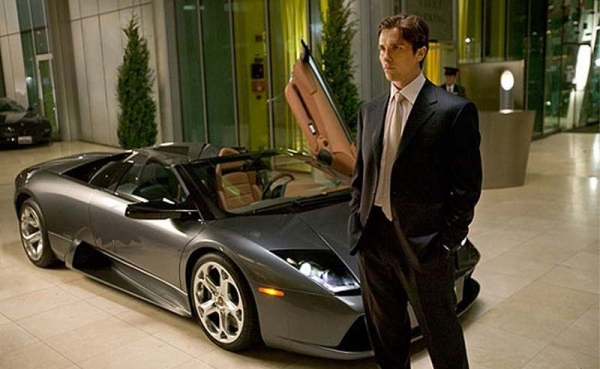 Bruce Wayne and Clark Kent actually would fit their general demographics to fit in with their views. Wayne is the rich native-born son of a Doctor who operates a company that is interested in the energy that you pay for and weapons. Wayne is from the East Coast and if there is a villain whom he truly fears, it’s the Tax Man. In his spare time, Wayne beats up the mentally ill whom he finds in lower sections of town and finds to be aberrant to his lifestyle. Clark Kent on the other hand is an immigrant who raised in the Midwest and has a Jewish heritage. Kent grows up to be a journalist and gets all preachy on the subjects of responsibility as well as ‘saving the Earth.’ Superman’s main villain is a corrupt member of big business who eventually did become President. Lex Luthor by contrast would seem to be exactly the type of guy that Bruce Wayne would do business with. 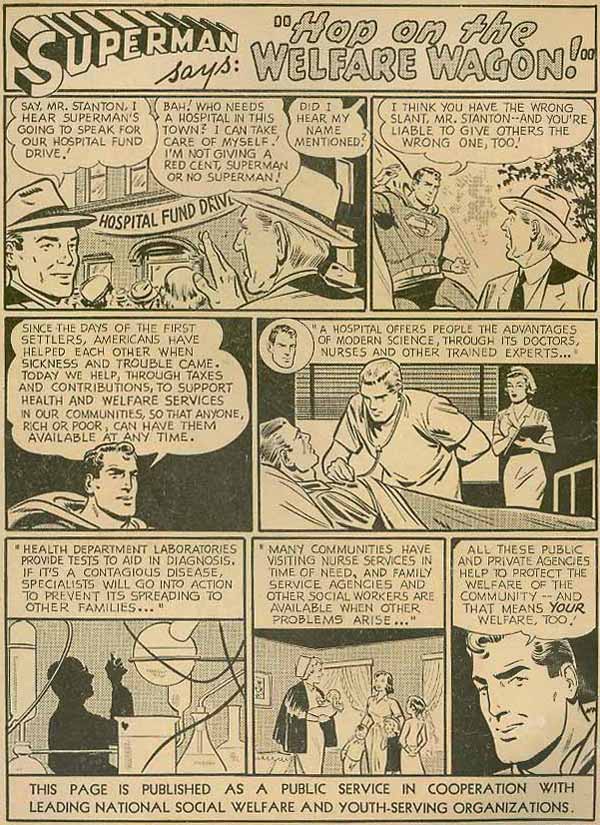 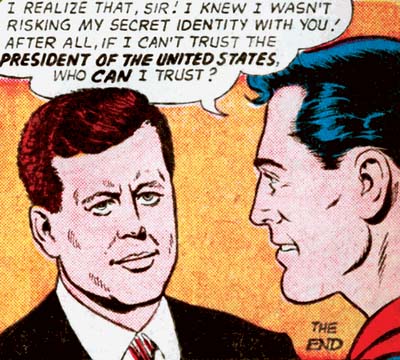 “And remember, you told me that I would get to… meet… Marilyn.”

Superman also appeared with Barack Obama in a comic book and the villain Darkseid was partially modeled after Richard Nixon. The reporters at the Daily Planet refer to Kent as being ‘liberally biased.’ Batman? He was the son of a Doctor and Wayne Enterprises has a pharmaceutical division. Do you think Wayne wants you walking into a hospital and getting free universal health care? Batman wants to send you there and while you are in the Emergency Room, Wayne would really kind of appreciate it if you managed to pay full price. A well-funded health care industry is how Bruce Wayne got where he is today and he will be damned before he sees those profits messed with in any way. 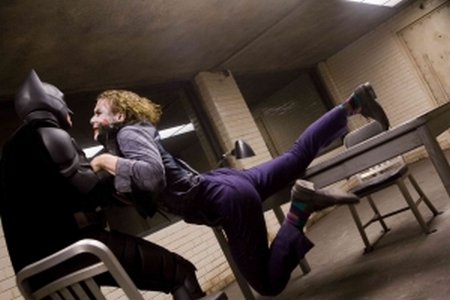 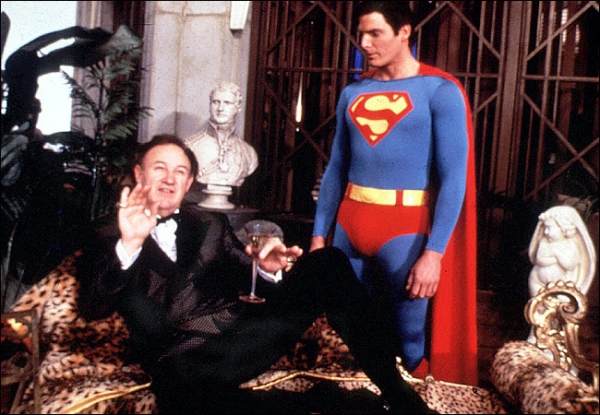 “Of course, I would like a cupcake Lex, After all, what are we here …uncivilized?”

On the subject of ‘enhanced interrogation,’ Superman would fall much farther on the side of ‘due process of the law’ with ‘lawyer present.’ Batman is more down the thinking of ‘Waterboarding? Sure if you happen to want to be a pansy about it. I guess we can waterboard him.’ Superman would have personally shut down the facility at Guantanamo Bay. Batman would have characterized the operation as a ‘good start.’ Batman would have more than likely been the world’s biggest supporter of Ronald Reagan. Superman looked like he was about to regurgitate in every scene in which they were placed together.

“Now, try and remember sweeties, I am choosing to let you live rather than die with the rest of us.”

Superman would probably argue that he is alive today because his mother made a choice for him to be alive. Batman could watch the Joker assassinate an entire room full of people including his young ward and still not actually just snap his neck. Batman will preserve life even if that life may go on one day to destroy other lives. That would be how much Batman is against the idea of allowing a life to be taken no matter how despicable it was. Superman is the sole survivor of a planet whose mother chose to allow him to live. In the mind of Superman, that is precisely the reason why we should preserve the woman’s right to choose. If his mother did not have a choice, Superman would be as dead as the rest of Krypton. Keep in mind, Batman is not exactly an ‘enhanced quality of life type of guy.’ You can live for decades thinking about Batman and your crime while drinking through a straw in Wayne’s opinion.

“I sort of forgot to get permission from the State Department to do this.” 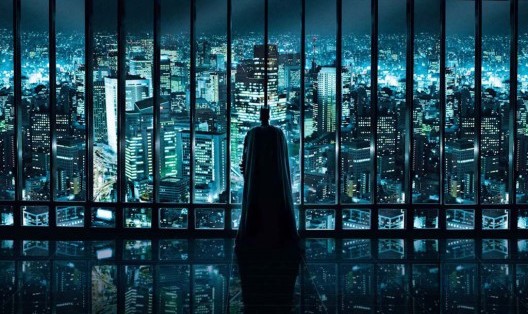 “I sort of forgot to get permission from the State Department to do this.”

In regards to respecting international borders as well as laws that America has in effect about them, Batman and Superman are finally remarkably similar. Neither one of them respect them at all. In Action Comics #900, Superman showed his undying respect for truth, justice, and the American Way by going to a rally in Iran and then renouncing his American Citizenship completely. That’s going to look great on the poster. Batman violated international laws by going into China on his own during the events of The Dark Knight in order to apprehend and illegally transfer a Chinese banker to a Gotham City holding cell. Of the two, Batman would have technically violated infinitely more laws in the apprehension of the banker than any of the laws that the banker broke. The banker could have never been prosecuted. Good thing that he seemed to have eaten a bomb that disagreed with him.