Courtney Love is a fascinating creature, emphasis on creature. Her life and career have included many ups and many, many, many, many more downs, only some of which include her music. 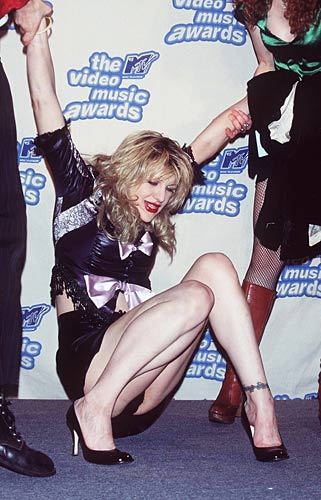 Perhaps her biggest claim to fame is being the name-bearer for the unofficial disease called Courtney Love Syndrome (CLS). Google that phrase and you’ll find tons of symptoms, each one progressively worse than the next. We have painstakingly detailed the worst symptoms below. If you suspect that might have CLS, see a doctor immediately. Also, stay away from aging grunge singers. They might be hazardous to your health.

Some people are expected to deliver the goods, night in and night out. If you are the top worker in your company, and your performance starts to slip, expect to be called into the boss’s office to pinpoint just what the hell is wrong with you all of a sudden. If the Rolling Stones released a bad album or put on a particularly awful show, people become massively disappointed in them. Unless it’s after 1979, in which case it’s to be expected.

But then you have people like Ms. Love, who have the opposite issue: nobody expects goodness out of them, ever. She certainly has fans, but many more see her as a mediocre musician, and an even worse actress. So when her band, Hole, puts out something that isn’t eardrum-shatteringly awful, it is treated like the Second Coming. When she puts on a semi-decent acting performance, such as her turn in The People vs. Larry Flynt, she gets nominated for a Golden Globe and wins no less than five other critics’ awards and is heralded as the next big thing in Hollywood. 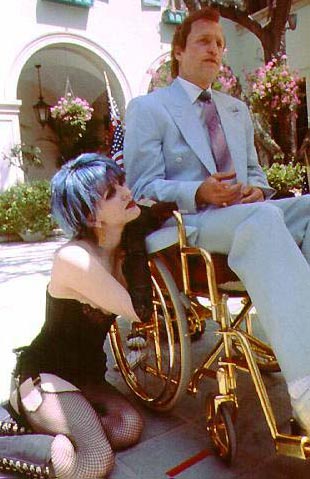 Now, if she had to act attracted to the REAL Larry Flynt, then she might’ve deserved an Oscar.

This, obviously, has not happened and, in fact, has not even come close to happening. But the important thing is that she made people think she was a good actress for a short time. If she manages to not botch a future role, expect her to be lauded as the next Drew Barrymore even though the only thing those two have in common is that they have both flashed David Letterman. 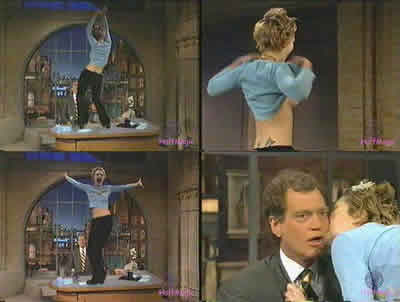 This is why Letterman never wants to retire

Too Weird For Most, Too Normal For The Rest

Even though there are many among us who wish to be left alone most of the time, we are a social species by nature. We require human contact and human interaction to maintain sanity and ensure survival, just as our ancestors did (fifteen cavemen versus a woolly mammoth stood a hell of a better chance than one caveman did).

But it’s difficult to form relations like this when you’re basically stuck in the middle of two vastly different groups, as is the case with Ms. Love. On the one side, she has the freaks and weirdos of the underground from whence she came. They hate her, and why? Because she’s a “sell-out,” the catch-all term for a person who makes money doing something they enjoy. Hole is too mainstream for a lot of her old crowd, and she is seen primarily by them as a glorified groupie, a rock-star hanger-on; in short, she’s a starbleeper. Fill in the bleep yourself. 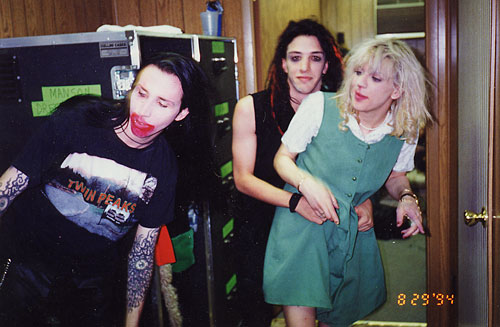 Clearly, choosing only the finest of the litter to bleep

Yet she doesn’t win too many brownie points from the mainstream crowd either, many of whom who see her as a weirdo freak who screams too much, drinks too much, and has enough kinds of herpes to complete the alphabet. Also, they blame her for breaking up Nirvana and driving Kurt Cobain to swallow a shotgun. That’s her reputation, and it’s exceedingly hard to shake a reputation, particularly when millions and millions of people believe in it. Whether it’s true or not, it hardly matters, because that’s what people believe.

It’s hard to be creative, especially when you were married to one of the most creative and talented musicians in recent history. A lot of times, it’s a lot easier to fake it: look cool, look original and sound like you know what you’re talking about, as opposed to actually being any of those things. As this link that most of you probably won’t click on says, “The need to appear innovative and compelling often takes precedence over actually doing something innovative and compelling.”

Does this sound like Courtney Love? Most likely, as any claims she or her fans have made in the past about being one of the original rock/grunge chicks just aren’t true. Many groups, such as L7 and Babes in Toyland, preceded Hole. Even her “kinderwhore” fashion (where you attempt to look like the sluttiest, nastiest five-year-old girl imaginable) were done by these bands before she showed up. However, L7 and Babes in Toyland never get played on the radio very often, so Love’s public visibility ensures that many see her as an innovator, rather than a follower. 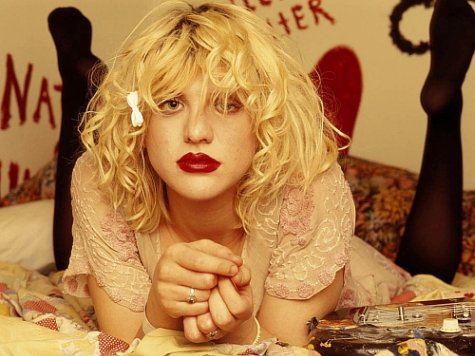 And nothing says visible like lipstick so bright red it ruins our vision.

Some people age well. They accept that they’re older, have wrinkles, and probably won’t make it in MMA anytime soon. Some people age so well you’d swear they’re better looking and more athletic than they were as a young pup. Some people don’t age well and rely on drugs, surgery, and excessive amounts of make-up to look presentable. Then some people…well…have articles written about them like this one. 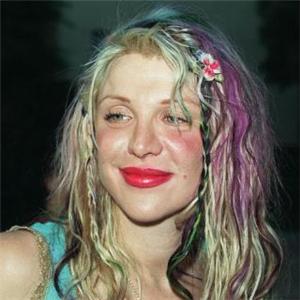 Partially, it’s the drugs. Love has had a lot of foreign substances injected into her system (not what you think, you pervs…actually, that too). And overdoing it on the make-up isn’t often good for one’s natural complexion, as one glance at any tabloid’s “celebrities without makeup” articles will attest. Oh, and drinking like they were about to ban alcohol again didn’t help either. She’s done a lot of damage to herself, and she is sadly one of the poster children for not looking good at all as you get older. On a related note…

Looking Hot One Minute, Looking Like A Monster The Next

With somebody like Ms. Love, you truly do not know what you’re going to get, in terms of attractiveness. Some days, she will come out looking like a vision of beauty: 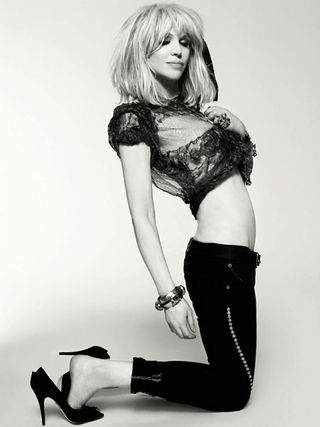 And then the very next day, we would get this: 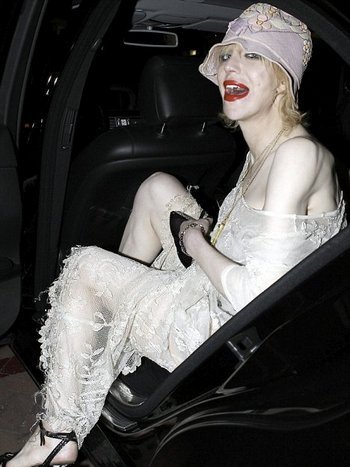 They forgot the mummy’s bandages

It’s certainly understandable that people aren’t going to look good every day of their lives. It’s just not possible; some days you just don’t care at all what people think of you and you’ll go outside with stained sweats and a ratty, torn-up DETROIT PISTONS 1989 NBA CHAMPIONS t-shirt, and you’ll feel just fine.

This girl, however, takes it to an extreme. Much like her successor to the throne, Lady Gaga, she truly keeps you guessing on whether she will spend the day turning heads and making men, well, ga-ga, or if she will make those same men stare in horror and contemplate if the cops would believe them if they ran into the station yelling about the invasion of the swamp hags.

CLS: Another Term for Histrionic Nutjob

At the end of the day, what makes CLS particularly dangerous is that it apparently makes you crazy and starved for attention, which is the bare-bones definition of histrionic disorder. Virtually every time Courtney Love appears somewhere, she is drunk, acting drunk, high, acting high, or saying something asinine in an attempt to stay relevant and news-worthy. When the actor who plays Edward in Twilight calls you a “d*?k” because you came out and laughed at an unsourced Internet rumor that he would play Kurt Cobain in a biopic, there’s a semi-decent chance you might be one. 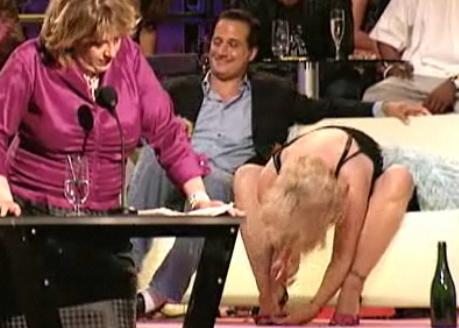 On the bright side, she gives comedy roasters plenty of material each and every year

Is it fair for one person to have various personality flaws attributed to them, when plenty of other people have the same issues? Probably not, though it did tie 1,400 words worth of immature humor together, and that can never be a bad thing. And if the prospect of CLS, in any of its many forms, ever get you down, just picture Ms. Love twenty years ago in her Kinderwhore outfit, and everything will be OK.