It’s easy to be jealous of celebrities, what with their seemingly endless amounts of fame, fortune, and ability to get away with pretty much anything; let’s just say that if someone non-famous gets several DUIs, he or she certainly doesn’t get away with a slap on the wrist.

The jealousy levels ratchet up a notch or two when we see celebrities who have enjoyed more than one amazing career. Seriously, isn’t one slice of the fame pie enough? Can’t you leave a little bit of spotlight for the rest of us?

Perhaps this is why we tend to indulge in a bit of schadenfreude when we observe a celebrity try to take on a new career and meet with less than spectacular results. However, for every Kevin Costner whose transition to a new genre isn’t entirely successful, there’s one of the celebrities on this list who has managed to successfully cross over from one career to another. 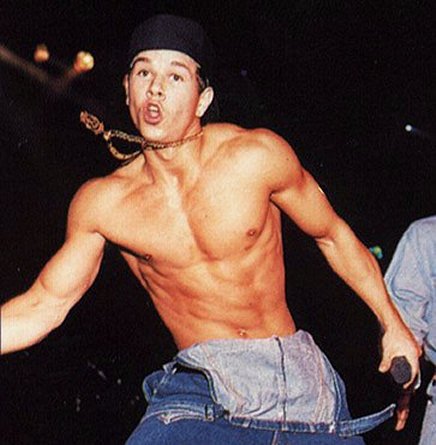 Mark Wahlberg is a highly respected actor who has appeared in a number of meaty roles that showcase the breadth and depth of his talent. For example, he plays a boxer called “Irish” Micky Ward who struggles with career and family issues in The Fighter; Staff Sergeant Sean Dignam in the twisted, back-stabbing conundrum that is The Departed; and criminal mastermind with a heart of gold Charlie Croker in the remake of The Italian Job. Not to mention his equally great performances in The Perfect Storm, Three Kings, and Boogie Nights.

So it will perhaps come as a surprise to some that his serious, talented actor was once known as Marky Mark, a prototypical early 90’s rapper. And perhaps even more of a surprise that he performed the dance song Good Vibrations along with The Funky Bunch, a song which became a #1 hit in several countries, including the US. If you were born in the 80’s or before, chances are good you’ve heard this song, and probably had it stuck in your head more than once. Even if you were born later, you might have heard it in The Mighty Ducks, Analyze This, and Rock Star. That’s pretty impressive for a celebrity crossover career! 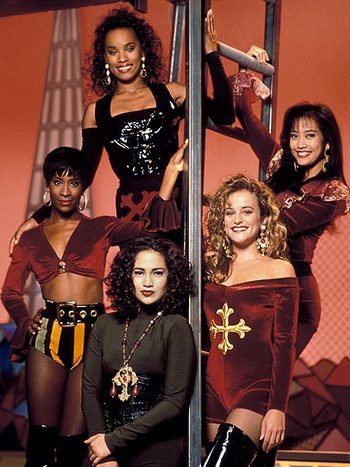 J. Lo is surprisingly the most modest of this group of Fly Girls.

A young Jennifer Lopez, a.k.a. J. Lo, was nothing if not persistent in her determination to become a star. She even turned down going to law school (bet her parents were thrilled about that one!) in order to establish a career as a dancer. Although, given her later record of success piled on top of more success, we think that if she’d stuck with lawyering she probably would have been awesome at it as well.

Jennifer started out by taking dance classes, and eventually managed to work herself up to an appearance as a “Fly Girl” on In Living Color. She had other roles after that, such as performing the lead in the movie Selena. Her performance was widely lauded, although some people got upset that they chose a Puerto Rican to play the roll of the Mexican singer. J. Lo enjoyed singing in the movie so much that she decided she might as well become a musician in addition to being a movie star. After all, how hard could it be?

And so she’s been owning both the music and movie worlds ever since, winning tons of awards and recognition (in part for being the first actress/singer to have a number one movie and a number one album in the same week). And, of course, raking in money for herself and those associated with her. 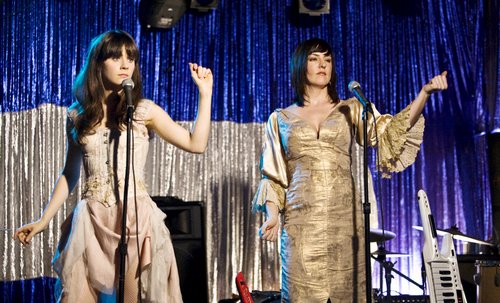 Munchausen by Proxy: coolest band name ever! Why did they have to break up after only four songs?

Looking at the picture above, you might say “that’s just a clip of Zooey Deschenal performing in Yes Man. Plenty of actors pretend to be musicians. But can she actually sing?”

The answer is, you bet your pants she can! To start with, clips of her movie-band Munchausen by Proxy (in which she actually sings!), have received more than a million views on YouTube. Many people were actually disappointed to find out that it wasn’t a “real band.” She’s performed in several musical groups, including a jazz band and an indie folk music duo called She & Him.

And of course, she’s had an equal amount of success in the movie world. After playing a series of “best friends” in movies, she moved on to starring roles, including the above-mentioned role in Yes Man and one in 500 Days of Summer. Plus, she’s still young; who knows what other crossovers she has in store for us? 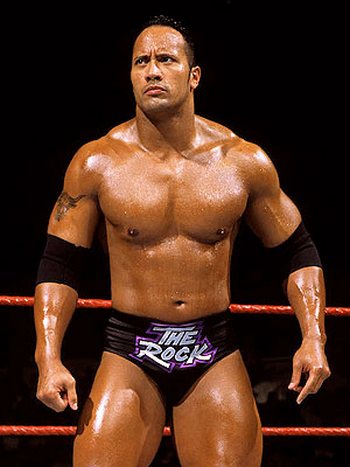 The future movie star rocking underwear that unfortunately leaves little to the imagination.

We’re going to pause right here and say that we kind of wish that Dwayne Johnson had stuck to referring to himself as “The Rock” in movie credits. We guess it’s his prerogative to distance himself from his wrestling roots if he wants to, but seriously, Dwayne? He sounds more like a character on Revenge of the Nerds than a hard-bodied tough guy.

That pet peeve aside, Dwayne has definitely done well for himself in multiple celebrity crossover careers. He came from a long line of wrestlers, so it’s not a surprise that he picked up the sport early in life. After that, his career path seemed almost to follow a script written for a movie about a wrestler making his way in the world, with stops along the way as a football player during college and resistance from his father to train him; he later changed his mind and said he’d do it, but he wouldn’t go easy on his son.

Dwayne easily could have stopped there and enjoyed more success in his early years than most people experience in a lifetime. But he made the leap into movies with as little effort as lifting a hundred-pound weight, playing a series of tough guys such as Mathayus in The Scorpion King and Joe Kingman in The Game Plan. He also gained one of the highest salaries ever for his first movie role, which makes for one heck of a celebrity crossover career if you ask us! I’ll be back… to make sure that people are fairly represented in the state of California!

Crossing over from bodybuilding to acting for Arnold Schwarzenagger was even harder than it might be for some because he didn’t speak much English when he first started appearing in films in the US. Did you ever notice how he made a name for himself with his often entertaining and peculiar one-liners, spoken in that accent that makes us swoon every time we hear it? It wasn’t a gimmick; he got lines like that because he literally had to learn English to later receive meatier dialogue.

He did eventually master the English language. In fact, he did it so well that he managed to make yet another career crossover later down the line – when he became Governor (ahem, Governator) of California. 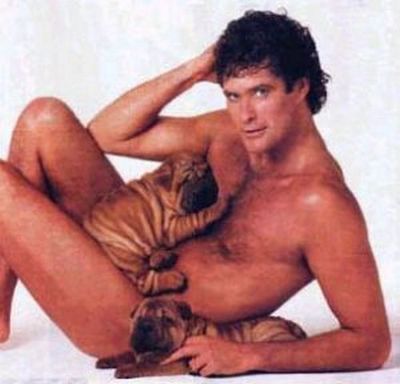 We’re not entirely sure how to classify this picture in the Hoff’s career spectrum.

At first we were hesitant to include David Hasselhoff on this list, because in amongst his multiple celebrity crossover careers, there were a lot of odd moments that make us cringe, such as the one pictured above.

Nevertheless, he’s been successful in gaining notoriety as a celebrity, if nothing else. His eleven-year-long run as Mitch Buchannon on Baywatch exposed him (literally) to people across the globe. He also performed in Knight Rider, as co-star to a talking car. In addition, he’s succeeded as a musician, with two number one hits on the German pop charts.

Finally, David Hasselhoff has an achievement that no other star on this list can boast: he’s had a musical created about his life, called, fittingly enough, David Hasselhoff: The Musical. If that’s not a crossover career to be proud of, then tell us what is!