If you were a child in the eighties (and are also a dude) it’s entirely likely that He-Man and the Masters of the Universe was your whole world. Mom, dad, school, food, air…everything else was secondary. The only thing kids loved more than the ridiculously popular Filmation cartoon was the abundant amount of toys the series spawned. The franchise featured countless characters known for their distinctive traits and unique powers. Being a freak on Eternia with some bizarre ability was pretty much the norm, as is evident from Stinkor and Moss Man. 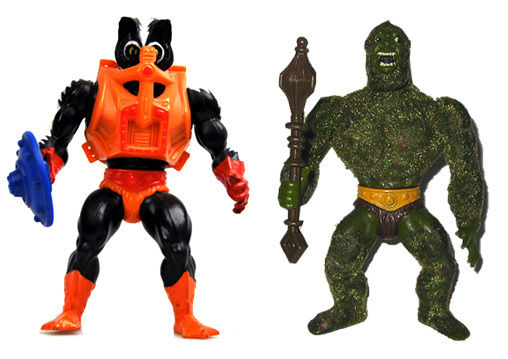 With characters running around such as the preachy He-Man, the eternally bumbling Skeletor, a monster covered in green pubes and some dude with rancid B.O., the pressure to stand out can be staggering. With that in mind we present the following six characters who somehow managed to top them all in the “crazy as sh**” category. 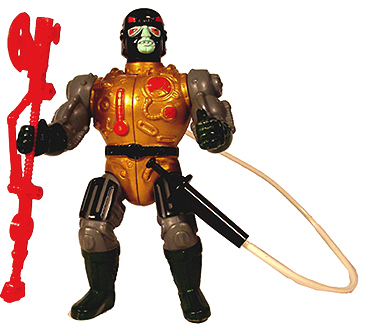 We begin our list with Blast-Attak, who essentially looks like a precursor to the cyborg Mortal Kombat characters. So what’s so special about him you ask? 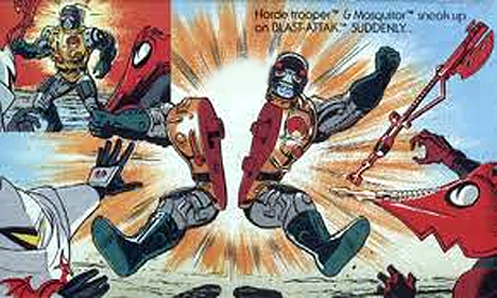 This character is not just a robotic warrior fighting the good fight. He’s also a walking f***ing time bomb. He’s the only combatant in the He-Man Universe that’s ready, willing and able to blow himself up. Sadly, he never had the chance to explode on the cartoon because the show was cancelled by the time his figure was released. We do wonder if his appearance may have stirred controversy among hyper-sensitive parent groups. The figure did however make it onto store shelves without any fuss. What better toy for an impressionable young child than an indestructible suicide bomber? 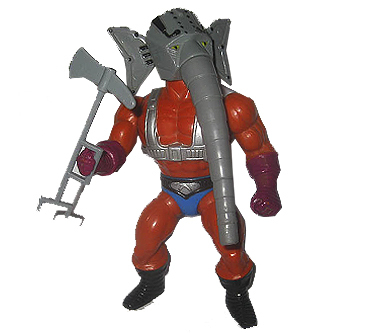 Snout Spout is a choice whipping boy when it comes to lists like this. The reason for the ridicule should be fairly obvious. Snout Spout looks like the aftermath of a toy-designer on the tail end of a terrifying acid trip. He is described as a “heroic firefighter with a metal elephant shaped head, who can squirt water out of his trunk”. This is the abomination you are stuck calling if you are unfortunate enough to live on Eternia and your home is burning down. Perhaps Snout Spout just shows up and scares the fire away. 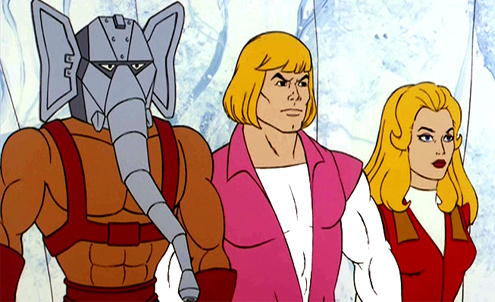 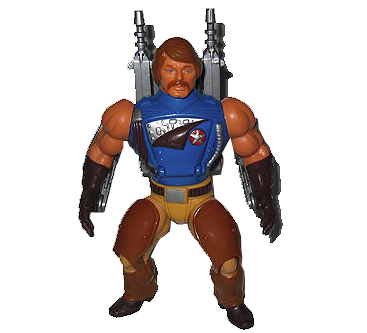 Rio Blast is Charles Bronson, Bruce Willis, Clint Eastwood and every member of the N.R.A. all rolled up into one and then c*ck-punched firmly into the He-Man Universe. Is there anything more bad-ass than an Eternian gunslinger with weapons hidden in his body? And when we say hidden inside his body, we literally mean just that.

At some point in Rio Blast’s life he decided that vital organs were for the weak. Consequently he proceeded to have his innards carved out in favor of a chest plate which dropped down to reveal a goddamn cannon. He apparently did this because the weaponry already attached to his back, legs and arms just weren’t adequate enough. Rio Blast was never seen in the classic cartoon, which is a crime in our view, however Colonel Blast did show up in the She-Ra cartoon. It would seem Mattel took the initial concept of the Colonel Blast character and turned it into the infinitely cooler Rio Blast figure. 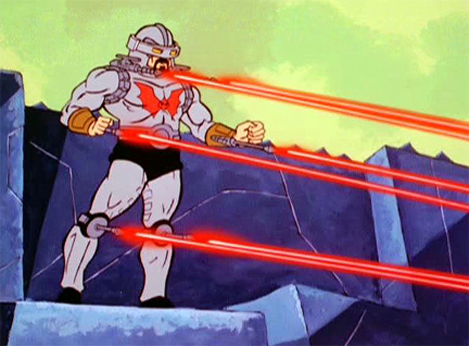 Strangely, the most obvious place for his seventh gun wasn’t used. 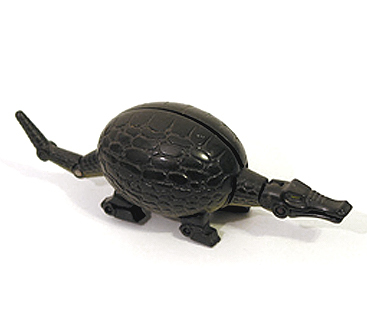 From kick-ass awesome to lame-ass LAME we bring you the Meteorbs. These ridiculous creatures were pets of the Rock People that transformed from meteors into animal forms. They were clearly Mattel’s sad attempt to tap into the lucrative Transformers market. 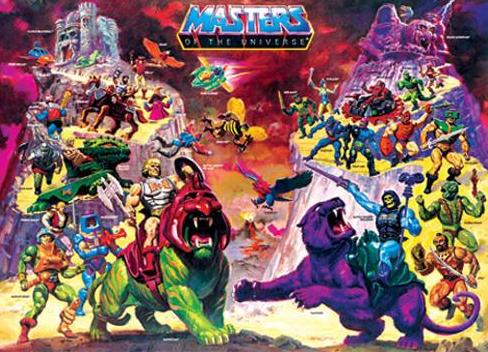 the market on all types of creepy warrior dudes was only plan A.

According to he-man.org the Meteorbs were originally from the Tamagoras toy-line. In 1986, Mattel entered into a joint venture with the Bandaï company who had been successfully producing the toys in Japan. 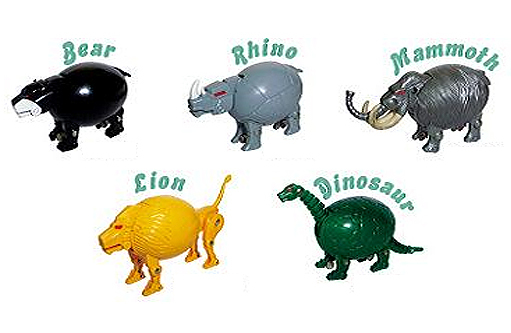 The outcome of the partnership was many confused and disappointed American children. Imagine the letdown kids experienced receiving these goofy egg creatures which their parents only bought because they happened to be in the same aisle as the He-Man toys.

Speaking of awful partnerships that led to disappointment… 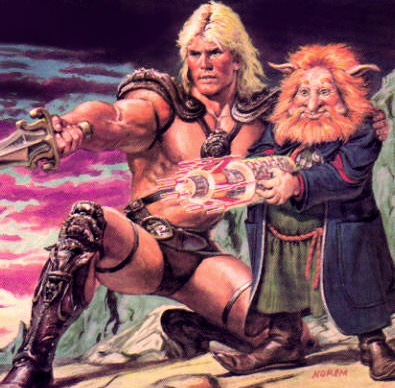 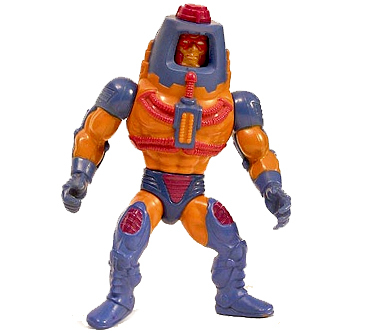 Man-E-Faces is a popular character from the classic He-Man franchise. He has the ability to change his face from that of a human to a monster or a robot. To make this goofy power a bit more practical his physical abilities somehow mirror the face he bears. So we guess he has the powers of a man, a monster and a robot…for whatever that’s worth. 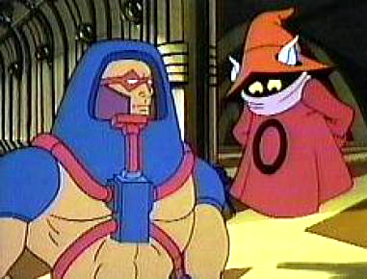 The exact moment Man-E-Faces and Orko realize they exist purely to sell toys.

We think it’s likely the creators of Man-E-Faces patterned him after a person suffering from some sort of violent multiple personality disorder. At least that’s the only reason we can think of to explain why the “Dad” in the following toy ad appears to have crapped his pants at the mere sight of the figure. 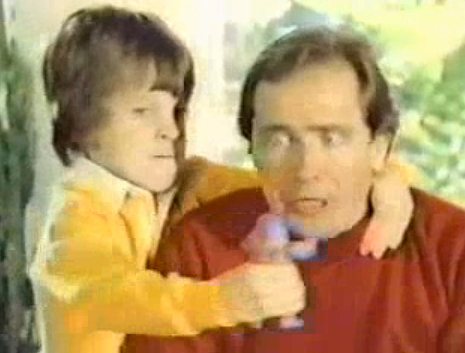 Christ…get it away, GET IT AWAY! 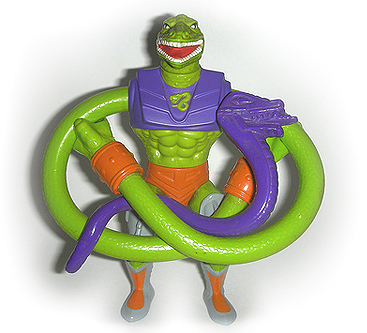 Number one on our list is Sssqueeze, an absurdly long-armed freak from the Snake Men series. The selling point of the figure was that his arms were “bendable”. That lame benefit hardly made up for the fact that he looked completely asinine, took up a ton of space and was just plain awkward. 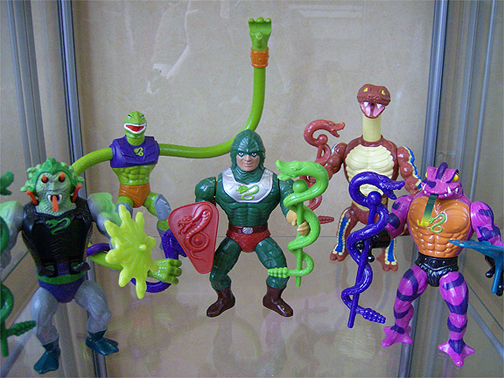 Yeah, we get the point of his unique design. His arms are representative of snakes which he could presumably use to hug He-Man to death. However, taking this monstrosity and tying up your dog in the yard or securing your bike with it was probably more useful. 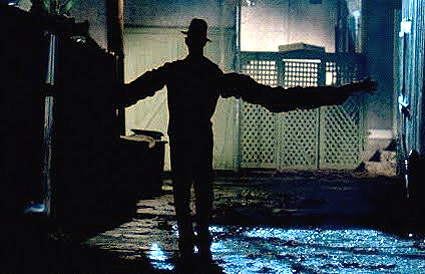 The toy was also disturbingly similar to the creepy long-armed Freddy Kruger from A Nightmare on Elm Street.

Despite our criticisms we here at Weirdworm would gladly accept any of your dusty old He-Man toys. At this point we’re mostly just missing a few accessories such as King Randor’s cape, Orko’s wand and Scareglow’s Axe. But we also need a new Teela figure. Last month one of our interns tried to peel off the breast plate molded to the figure in hopes of checking out her plastic boobs. Now there’s not much left of her.

That intern has now been promoted to Weirdworm Editor-in-Chief.