Movies about people with super-human powers are common; there are entire genres based on different ways in which humans can gain abilities through genetics, contact with radiation, magic, and more. You might even go so far as to say that the ideas behind this special attribution of power are influenced by how we think about deities, or that these characters become somewhat god-like when they gain their powers. After all, our thoughts about beings with great power originated in the mythoi in which we described our deities, and we described our deities based on phenomena that we couldn’t explain any other way.

However, there are only a handful of movies that showcase characters with powers that are actually attributed to deities in the Bible. Some of the movies on this list, like Constantine and The Lion, The Witch, and The Wardrobe, were clearly aiming for a sort of Christian allegory or religious re-imagination. Others, like X-Men and Powder, just managed to work it in by accident (we assume). Whether they’re sacrilegious or whether they benefit Christianity by disseminating the doctrine is up for debate – we’re not here to judge, we’re just here to blatantly assume that certain reoccurring themes in movies have something to do with a higher power.

Neo: The Power of Resurrection (The Matrix Trilogy) 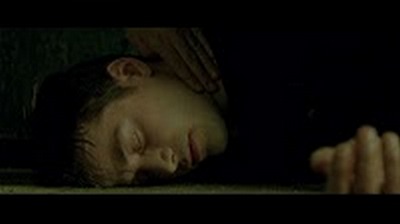 When you’re thinking of movies that are designed to be religious parables, The Matrix probably isn’t the first thing that comes to mind. After all, it’s a science-fiction story taking place in the future that explores the implications of artificial intelligence. And it spends more time focusing on creepy metallic robot squids and people eating runny gruel that looks like boogers than you’d expect if the goal was to explore aspects of the Christian belief system.

But once you take a closer look at The Matrix, you’ll see parallels to things that happen in the Bible. For example, in the movie’s universe humans have “created” intelligent life (in the form of artificial intelligence), just as God was said to have done in the Garden of Eden. Eventually a Christ-like figure appears in the form of Neo, complete with a period of doubt followed by death at the hands of his enemies and a subsequent resurrection. We don’t think there’s anything that specifically says that Jesus proceeded to dish out a serious fist-slinging, body-bursting butt-kicking after he came back to life, but we suppose that’s what they call “creative license.” 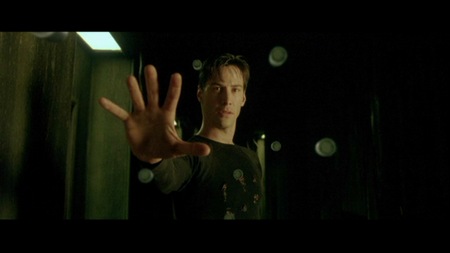 JK guys I was just taking a nap!

The eyes! They burn!

Starting during the second X-Men movie, it’s Jean Grey who is getting in on the god-like action, although she’s kind of jumping all around the Bible as she does so. First, she uses her mutant powers of telekinesis to save the rest of the X-Men from being washed away after a dam bursts. As she raises the plane with one hand, she holds the waves back with the other, parting them around her until the mutants make it to safety. Sadly, she is crushed by the water shortly after; perhaps she wouldn’t have made a very good Moses after all.

In the next movie, she takes it a step further by getting resurrected as Phoenix. When she becomes this new character, the child-like, self-indulgent side of her personality takes over, and she kills her husband, rips Professor X into little bitty pieces, and joins with her previously sworn enemies. She must have missed the part of deity education where they teach the principle of “live-and-let-live.” 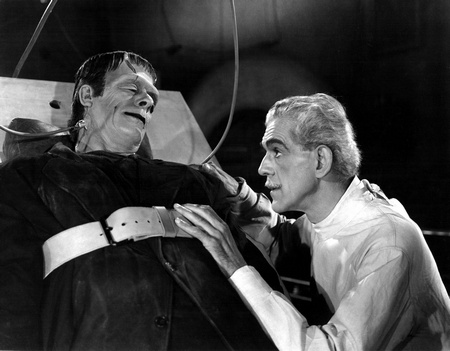 Not exactly as handsome as we picture Adam to have been…

Poor Dr. Frankenstein. All he wanted to do was to explore the place where the boundaries of science run into those of religion, as so many have done before him. How could he have known that in doing so he’d create a monster?

Frankenstein’s version of creating life is kind of how God is supposed to have created Eve (by taking a rib from Adam and then… something… we weren’t paying attention to that part). Except that the good doctor didn’t just take a rib, and he didn’t take from a living being; he took an entire body’s worth of pieces from cadavers. Using the power of lightning and a complicated thingy-ma-jig, he brought this assembled pile of dead flesh back to life. What ensued was the loosing on the world of a monster who felt like he had no place in the society, followed by a bunch of hand-wringing and fretting about what happens when you try to play God. Truer words have never been spoken!

Constantine: The Exorcism of Demons (Constantine) 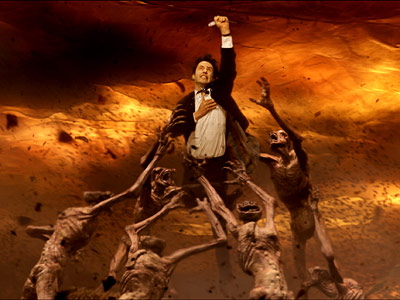 Silly Constantine, you’re supposed to exorcise the demons, not play king of the mountain with them!

We’re not saying this is the only movie in which demons may or may not have been exorcised. We just love Keanu so much that we had to put him in this list twice, this time performing exorcisms to escape eternal damnation because of a suicide attempt back when he was young and emo. It’s hard for us to know exactly why Jesus had to go about exorcising demons all the time; they definitely seem to have been a lot more prevalent once upon a time than they are now. Of course, it’s possible that not all of the demons that had to be exorcised once upon a time actually were demons. After all, a lot of bad behavior was attributed to supernatural causes because it was easier to do that than to own up to behaving like a jerk and getting someone burned at the stake just because you didn’t like her. Additionally, they didn’t have scientific explanations such as ergot poisoning to explain some seriously weird phenomena, such as “delirium, violent convulsions, [and] incomprehensible speech.” Regardless, Constantine would have fit right in back around 0 AD. 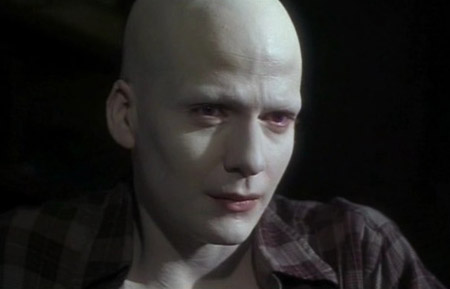 The lack of a beard will definitely hold him back when it comes to staking his claim as a deity.

In the movie Powder, a woman is struck by lightning when she is pregnant. She dies soon after, but gives birth to a highly intelligent boy named Jeremy (but often called Powder by others due to his odd, super-pale skin) with remarkable powers. The fact that Powder can cause strange occurrence in electrical objects isn’t what makes him God-like. Instead, it’s his ability to know the true nature of people and understand them on a super-deep level. For example, he’s able to feel the emotions of a dying deer, and he can communicate with a dying woman who’s in a coma.

God is well-known for his ability to see into people’s souls. In fact, it’s what makes him capable of judging whether they’ve been naughty or nice, and subsequently assigning them to Heaven or eternal damnation. 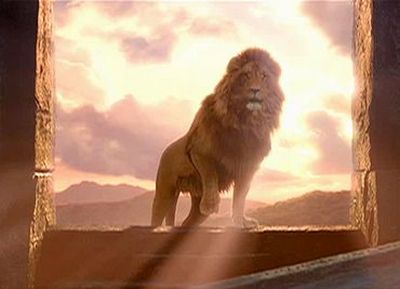 Yeah, we suppose they might have been going for

The character Aslan in the movie The Lion, The Witch, and the Wardrobe, is an expert when it comes to invoking the powers of the deity. Healing and resurrection after sacrifice come to mind.

It’s not really a surprise, though. When C.S. Lewis wrote the Chronicles of Narnia, he meant them as fantastical fables based on Christian principles. According to one writer, “a deeply Christian vision shapes Narnia.” And we admit that depicting this character as a lion wasn’t an exactly subtle way of pointing out who he was supposed to represent.