DC Comics has been in the news lately after rebooting their entire comic character line-up and enacting sweeping changes across all characters. Changes range from the cosmetic – Superman forgoing his red underpants, while Starfire wears almost nothing at all – to a complete erasure of several decades of back-story.

As broad as these changes may seem, they are nothing new. Comic book writers frequently re-imagine their characters to keep them fresh and exciting for new generations of readers; that’s why Spider-Man isn’t in his sixties and Iron Man doesn’t fight Communism anymore. In fact, when you start taking into account alternate universes, tribute stories, and various retcons, the latest DC reboot seems mild by comparison. After all, how can Superman wearing blue jeans compare to:

The Goddamn Batman as a Goddamn Vampire

Of all superheroes… hell, of all comic book characters… Batman most epitomizes the sensibilities of gothic literature. Gothic fiction combines elements from horror and romance – heroic romance, not the soap opera fare the term now represents – to provide us stories about isolated heroes (Batman), malevolent and victimized villains (Joker, Dr. Freeze), and a setting that evokes darkness, fear, and ruin (Gotham City).

In this spirit, DC comics published a graphic novel that featured an epic struggle between Batman and the definitive gothic villain: Dracula. The story was surprisingly dark, even for a Batman comic. Dracula and his undead minions mercilessly feed on prostitutes and the homeless, and there’s even a scene in which Dracula slits Commissioner Gordon’s throat to drink his blood from a wine glass. Bela Lugosi is nowhere in sight, is what we’re saying. 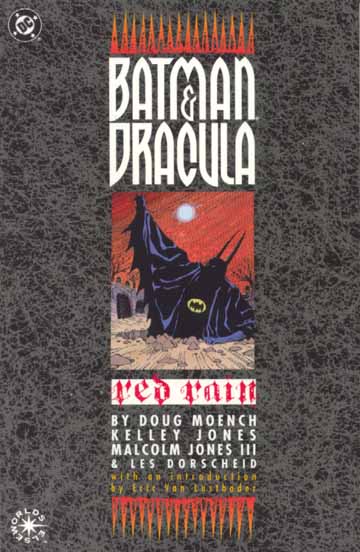 Batman’s presentation largely follows that of his canonical counter-part. The story is set in modern day Gotham instead of Victorian England, and Batman still relies heavily on his rational mind, gadgets, and martial arts skills to defeat enemies. So what makes this graphic novel a re-imagining of Batman instead of an incredibly bleak one-shot? 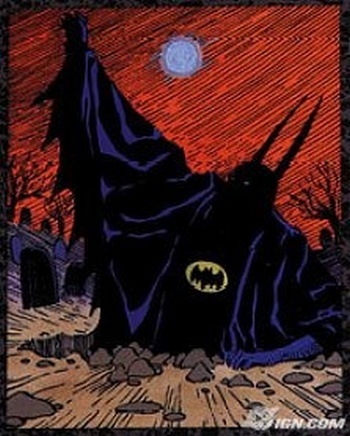 Well, that might have something to do with the ending in which Batman dies. And then comes back to life as a full-fledged vampire.

After suffering multiple wounds and bites, Bruce Wayne is given a funeral while Batman lives on for two insane sequels to hunt the remnants of Dracula’s army, and eventually, Gotham City regulars like Penguin and Scarecrow. He struggles to resist his bloodlust, and learns that he can calm it through a woman’s pure love (somehow). Batman finds this love through regular sex romps with Catwoman, who was transformed by Dracula’s second-in-command into a Werecat. This probably should’ve surprised us more, but we stopped asking questions the first time Batman sprouted wings out of his back and learned to fly. 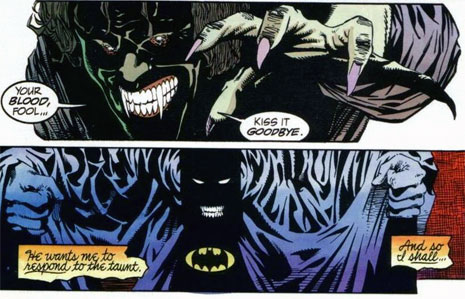 But of course, this is Batman we’re talking about here, so inevitably Joker gets involved and the vampire shit hits Van Helsing’s fan. Long story short: Joker kills Catwoman, Batman loses control of his bloodlust, and Gotham’s criminals have to start worrying about being eaten every time they try to rob a bank. Fearing he’ll start feeding on civilians once Gotham runs out villainy, Gordon teams up with Alfred and Two-Face to descend into the Batcave and kill him once and for all. The trilogy concludes with Batman burning up in the sunlight, presumably before the Justice League shows up and asks “Seriously guys, what the FUCK?”

The Punisher Resurrected to Fight Demons and Monsters

Punisher is one of the most popular anti-heroes in the Marvel Universe, second perhaps only to Wolverine. His story is straightforward and easy to portray: an ordinary man loses his wife and child in a mob shooting and swears revenge on every single criminal on the planet. But despite the knowledge that Punisher is best portrayed as an ordinary human gunning down dozens of mobsters, every now and then Marvel mixes things up with an unhealthy dose of the supernatural. 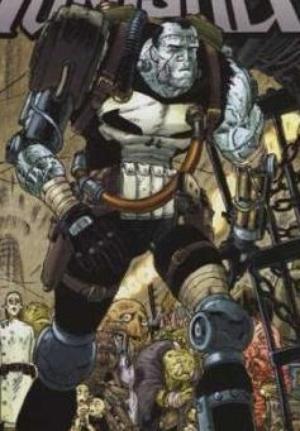 In 2009, when Punisher was torn apart and decapitated, the logical step (apparently) was to resurrect his character as a literal Frankenstein monster called “Frankencastle”, who fights to protect the oppressed and downtrodden monsters that live at the edges of the Marvel Universe. It doesn’t make a lot of sense, but at least it appealed to fans of Marvel’s classic horror books and over-the-top monster fights. But the insanity pales in comparison to the 1998 Marvel Knights title “The Punisher: Purgatory”, in which Frank Castle commits suicide only to be resurrected by angels who want him to hunt demons for them, bringing the bar for Punisher so low that that Marvel quickly retconned the story and largely kept him to his mobster, non-superheroic roots for nearly twenty years. 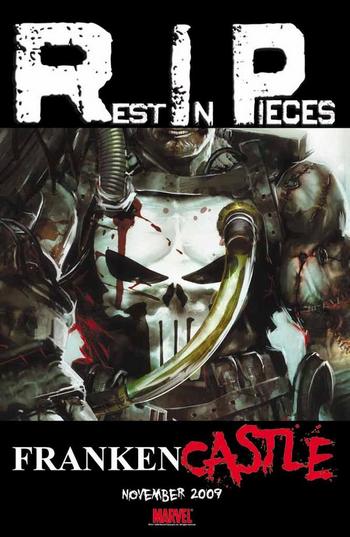 The Fantastic Four were the first superhero team created by Stan Lee and Jack Kirby for Marvel Comics, and have remained a staple of their continuity ever since. They’re historically portrayed as a family unit, occasionally falling into petty squabbles, but largely relying on each other to defeat their enemies and save the world on a regular basis. So when Warren Ellis wrote his tribute to one hundred years of comic book history in “Planetary”, naturally he would give the FF a place of prominence among these significant characters… by writing them as the main villains of the series. Collectively the team known as “The Four” use their abilities for profit and personal gain, and are connected to Nazi scientists and experiments on captured political dissidents. 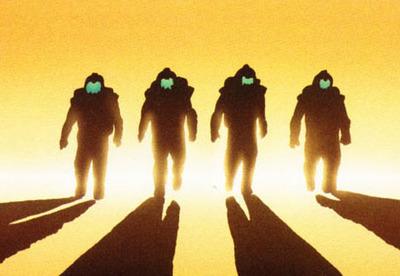 The Justice League as the Illuminati

The majority of comic books treat the existence of superheroes as public knowledge. One exception is the mini-series JLA: The Secret Society of Super Heroes, which shifts the heroic exploits of the entire DC Universe onto tabloid pages. Superheroes are now taken just as seriously as a story about Bigfoot and the Loch Ness Monster teaming up to hide Obama’s birth certificate from aliens. 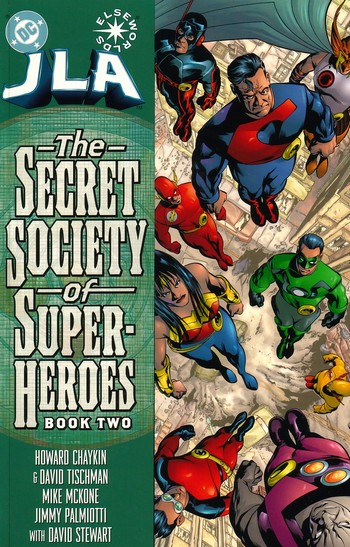 At the center of the story is a Justice League that operates as an Illuminati-like secret society, using Wonder Woman’s invisibility technology to disguise their presence during missions. The Illuminati reference isn’t an exaggeration either; as the story progresses, the reader learns that our heroes place themselves above the law, holding their own lawyer-free tribunals and handing out life sentences to the Phantom Zone. There’s also the minor fact that half the team manipulates the stock exchange to benefit their portfolios.

Life Without Superman Sucks for Everyone

Whether you love or hate Superman, it’s hard to deny that he’s one of the most inspirational and uplifting figures in comic book history. The DC Universe is a better place for his presence, and occasionally writers will explore how events would have unfolded if Superman never became a hero. One such example is Justice League: The Nail, in which Jonathan and Martha Kent’s tire is punctured by a nail, which keeps them from finding Superman’s Kryptonian rocket when it crash-lands. Without the Kents, Superman never comes to be. Without an inspiration figure to set the standard for superheroes, Batman’s morality slips and he murders the Joker on live television. Ordinary humans that already consider superheroes to be mutants or aliens completely lose their shit, and start arresting everyone without provocation or cause. 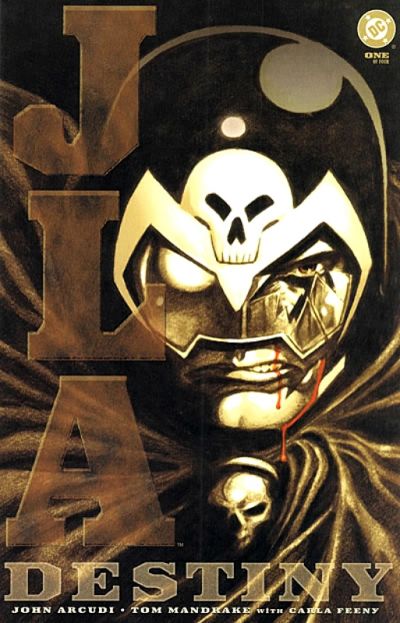 But in terms of bleakness, The Nail doesn’t even hold a candle to the world of JLA: Destiny, a four-issue mini-series published a year after the 2001 invasion of Afghanistan. In this story, Superman never left Krypton and Bruce Wayne is killed in Crime Alley instead of his father, Thomas. The Justice League is a crime-fighting team turned military unit almost evenly split between human and superpowered operatives, creating a distrustful rift between members. When not fighting with each other, the team has to deal with America’s conflict against a fictional Middle Eastern nation ruled by an alien, a worldwide famine that has left millions starving, terrorists blowing up the United States Cabinet, and a former JLA member manifesting psychic visions of the apocalypse.

The Marvel Universe According to George Romero

Of all re-imaginings, the biggest one that simply won’t die are the Marvel Zombies. They made their first appearance in Ultimate Fantastic Four as an alternate universe in which a zombie plague infected the entire superhero population. The infected heroes proceed to eat the entire uninfected human population within 24 hours, including supporting characters like Spider-Man’s Aunt May and the Avengers butler Jarvis. Fans demanded more of the undead heroes and Marvel certainly listened; the Marvel Zombies received no less than seven spin-offs, two one-shot specials, guest appearances in other titles, and a canonical tie-in with Evil Dead’s Ash Williams. 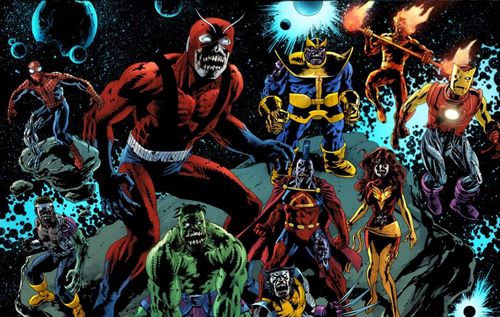