According to some, the 1990’s were to be the end of all things. And while depressing grunge bands and Monica Lewinsky jokes may have seemed like the end of the world, these doomsayers were very serious about their predictions…

It may seem farfetched now, but there was a time when people referred to a far flung wild futuristic future, they were actually talking about the 1990s. You never know, they might have considered suburban kids who paid fifty dollars for a flannel shirt to be as disturbing as a post nuclear apocalypse. On the other hand, if you were really looking forward to taking steps to a future that included the phrase “laser sword and a major land war,” you still might actually be kind of bummed by what may seem like your completely lost youth.

“Better shackle down with SPF 9-Billion…” 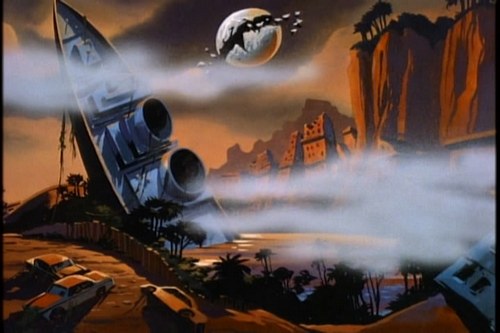 “It must be the dawning of the Age of Aquarius. The moon is in the seventh house. Parts of the Moon are also scattered along 1st avenue.”

Try and picture the scene. You are a five-year-old kid who has just sat down to watch the glory that was once Saturday Morning Cartoons. The usual fare comes on. There are stoners solving mysteries with Great Danes. There are small blue Belgian imps who should probably not be analyzed too closely. All fun will end when Don Cornelius announces that it is time for Soul Train. Somewhere in all of that glory, there is an introduction that may well scar you for life. You see the opening to Thundarr The Barbarian. The opening tells you that in the oddly specific year 1994, a rogue planet will hit our Earth. You can’t help but think “My God, I will only be 19. There is a good chance I won’t even have had time to sweat out whether a girl is pregnant or not.” About the time that you realize you are in Kentucky and it’s not really all that much of a concern, all of the sudden you get to enjoy the coolness of the idea that your descendants may well turn into …well whatever Ookla was. Two years later, you’ll be convinced Schwarzenegger ripped off Thundarr and some guy named Robert E. Howard even took the time to preemptively rip off your hero sixty years earlier as well. Along with the Sorceress Princess Ariel (who to our knowledge was never part fish) would work with Thundarr and his Sunsword (which totally wasn’t a lightsaber) to defeat mutants in New York’s sewers, just like in Futurama.

“Your name is Khan .. And I’m Jewish… and My God that chest is exquisite…”

The Eugenic Wars were to take place between 1992 and 1996 and the only one during that time who tried to spread his Space Seed was Bill Clinton. A race of atomic supermen led by Khan Domiyan Singh takes over a fourth of the Earth and is inexplicably sent into space so he could be returned to life and make Kirk scream while believing Spock might never be resurrected. Of course, the real downside would be having flashbacks about Khan while trying to perform The Fiddler on the Roof.

Terry Gilliam is a genius. A madman, but still a genius. In 1995, he painted a grim future of 1996 with a flashback to 1990 as well as an apocalypse in full swing by 2023. A spreading virus causes the necessity of creating time travel to figure out the cure so as to be able to enter a world populated by wild animals. Of course, the crazy people releasing animals from the zoo are not really to blame. The ones you really have to look out for are the crazed middle-aged virus characters that may or may not go on to slaughter humanity and possibly have sex with elderly women. The future was pretty scary back then indeed.

CONQUEST OF THE PLANET OF THE APES 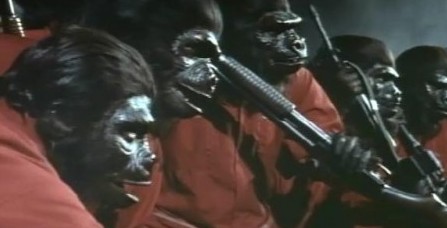 “Now, the important thing is that no one tries to turn this into some sort of racial stereotype.”

In 1991, the apes will rise. With the help of a handy government agency that has shotguns behind glass cages and super-intelligent talking apes taking over the world sounds a lot more fun than the actual Gulf War or George H. W. Bush babbling about a thousand points of light… only if those points of light are out of the business end of a shotgun with friggin’ apes on the other end. This is not to be confused with Rise of the Planet of the Apes even though it is the same plot. Conquest of the Planet of the Apes was part of the original film series while Rise technically comes after but is not affiliated with Tim Burton’s “bold” re-imagining of Planet of the Apes. 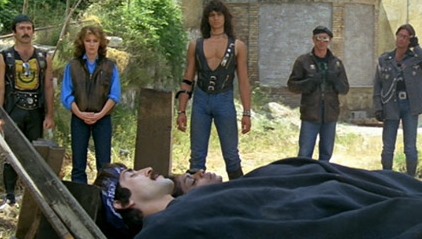 “Do we fight now?” “Not until we get done with our daily chest waxing.”

The only way to really portray a biker apocalypse in which the cops have given up the south Bronx to insidious gangs is to dress every one like they were the village people and have part of it shot in Rome by an Italian director. If you are going to go biker apocalypse, also make sure you don’t wear shirts and grease your chest. The plot mostly centers around a teenager that is scared that her father is running a corporation and might have voted for George H. W. Bush in the last election and therefore runs away to join the bikers. This is dangerous, clearly, so daddy hires mercenary Vic Morrow (about a year before his head was chopped off for the Twilight Zone) so that everyone can put a few years off jazz tap to use kicking the crap out of each other and the girl can fall in love with a guy dressed as hard trick hooker. 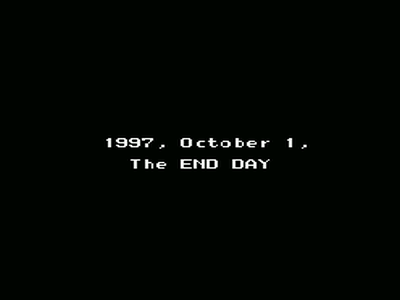 “Screw you Mayans, we are going to make this loud and clear as well as in pixels.”

Apparently, SUPER NES players were ingrained to be scared to death of the day October 1, 1997 as the END DAY. I think most of the reaction was “Holy Crap! I only have seven years to nail that slutty girl down the street!” Apparently the best way to deal with an apocalypse other than to originally call the game the God-Slayer is to build a big friggin’ tower in the sky and never bother to explain it to anyone. The world falls into medieval society and ruin any way because apparently no one gave the princess a name or some shit, and you have to discover the meaning of the tower and maybe even con a Giant out of a golden goose. Thanks to this game, there was a whole generation of video gamers that thought that Terminator’s Judgment Day was the ultimate in wussification.