The beauty of Legos is that you can build anything – anything at all – if you have the dedication to click little pieces of plastic together for huge amounts of time. Instructions? Aw hell naw! They don’t print an instruction sheet for success, son. If you’re gonna make it big in the constructible toy bracket then you’re going to have to fly by the seat of your pants and boldly into the blocky future.

Henry Lim is an odd fellow. If you venture over to his website you’ll note that he’s made a hobby of Lego sculptures. His subjects range from a replica bust of Beethoven, a gray-scale mosaic of Catwoman from Tim Burton’s Batman Returns and a fourteen foot long stegosaurus. But as impressive as spending seven months building a dinosaur out of a children’s toy is, these feats don’t compare to building a functioning musical instrument. 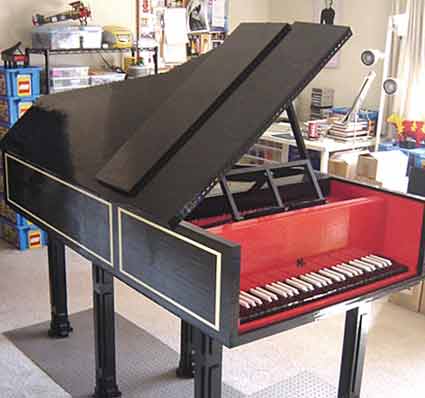 Lim’s harpsichord weighs in at about one-hundred and fifty pounds and is made almost entirely of Lego bricks (over one-hundred thousand in all). The only non-Lego pieces are wire strings, though if he had a government grant we’re sure Lim would have found a way to build those, too. It has a surprisingly good range of sixty-one notes, which is sixty-one notes more than your Aquanauts set could ever hope to achieve. According to Lim, the whole thing took two years of planning, building, rebuilding (due to implosion) and finalizing. Originally he wanted to build a piano but had to settle for building a harpsichord because the strings didn’t need to hold as much tension. Think about that for a second: he had to settle for building a harpsichord from colorful plastic.

I don’t know much about The Netherlands or the fine people who choose to dwell there, but apparently the host something called the LegoWorld exhibition, a gathering of those tiny little bricks and the people who love them. Two of these people, Gerrit Bronsveld and Martijn Boogaarts, proved in 2005 that the only thing they love more than Legos is a good pinball machine. Finding that their two loves had yet to overlap, they decided to go all in and make their own Lego pinball machine. 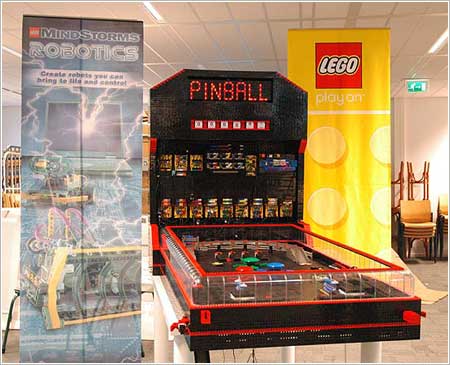 Constructed with over twenty-thousand bricks, the only pieces not made of Lego are glass and steel balls used for gameplay. Everything else, from the plunger and coin slot to the motors and computers, are made from Legos. The more advanced aspects come from the Mindstorm series. Mindstorm features computers which can be programmed for simple functions. Of course, you need to create your own programming language to make it all work, but Bronsveld and Boogaarts did just that, using thirteen of the devices to pull it all together, controlling motion and weight sensors as well as a series of lights on the scoreboard and playfield. Game play begins when a fifty Euro cent piece is inserted, so save your American quarters.

When you think of Legos, do you think of safety? Most people would say “no,” because they’ve probably tried to swallow one as a child or as a heavily intoxicated adult. But the folks at Volvo would disagree with you. In 2004, they formed a partnership with Lego to feature a replica Volvo XC90 at the American Legoland theme park. The idea is to promote driving safety, which makes perfect sense once you reflect upon the durability of Legos compared to the modern car. Or at least Toyotas. 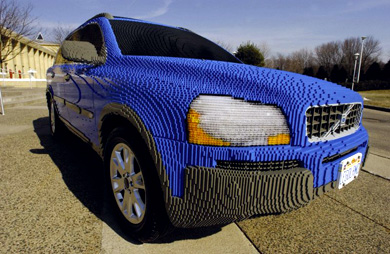 Though inoperable (your expectations would have to be pretty absurd to think that a minivan made of plastic bricks would actually function) it is an exact replica of the XC90 down to the license plate. The piece was constructed by Legoland’s elite Master Builders, a secret cabal of hooded individuals who construct the park’s largest projects. The construction of the XC90 also saw a re-branding of the Legoland driving school to the “Legoland/Volvo Bumpy Roads and Flat, Square Tires Experience.”