Comic books and music. Two things that are widely and wildly consumed by people the world over. Musicians read comics, sometimes they write comics. Occassionally you get comic artists and writers playing music. They are two wonderful artistic mediums, no doubt about it. However, unlike peanut butter and chocolate, which are two great tastes that go great together, somehow musicians starring in the comics just doesn’t seem to work out.

From DC’s ill-fated Piranha Press imprint of a couple of decades back comes this incredibly odd concept for a comic book. Prince, back when he was called Prince the first time around, stars as a sort of version of himself. We say “sort of” because while he is portrayed as around 5 feet tall, and he is shown to be a musician, that’s about where it stops, reality-wise.

The story, such as it is, is one that could be told in 2-3 pages but instead fills the entire book. Prince and this other guy, named Gemmini, who was his…evil twin…or something, were very close when they were starting out, see. Only Prince learned to use his incredible musical gift for good, and this other fellow, well, for reasons not adequately (read: not at all) explored, his music incites folks to riot and kill each other.

There’s also some rot about Prince’s current girlfriend being a spy for the other guy or something, but truthfully, everything wrong with this comic (which admittedly was under a gorgeous Brian Bolland cover) can be summed up thusly: Prince, after taking a baseball bat away from the bad guys, sort of… shoves on it with his high-heeled boot and just shatters the thing. Prince, the little 5 foot nothing dude weighing no more than 110 pounds soaking wet, shatters a friggin’ baseball bat.

There’s also a totally weird moment where Prince brings a woman back to life with the power of Purple Rain, but seriously, a baseball bat. 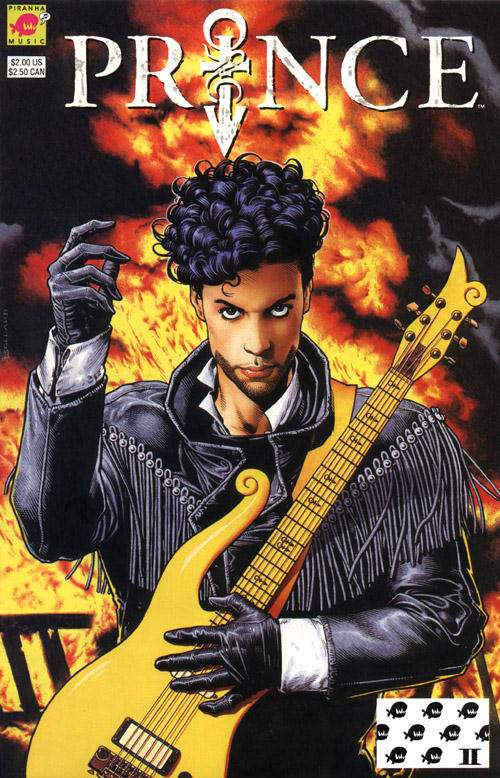 New Kids on the Block

For a while back in the early 90s, when “boy bands” hadn’t quite become the joke they would be just weeks later, New Kids on the Block ruled the Earth. Based primarily on the song “The Right Stuff” and their good looks, the New Kids were everywhere. By the early 90s, Harvey comics had long since seen their best days come and go but were struggling valiantly to keep up with a changing market that had little place for them. New Kids didn’t help as it turned out, but you gotta give ’em credit for trying. 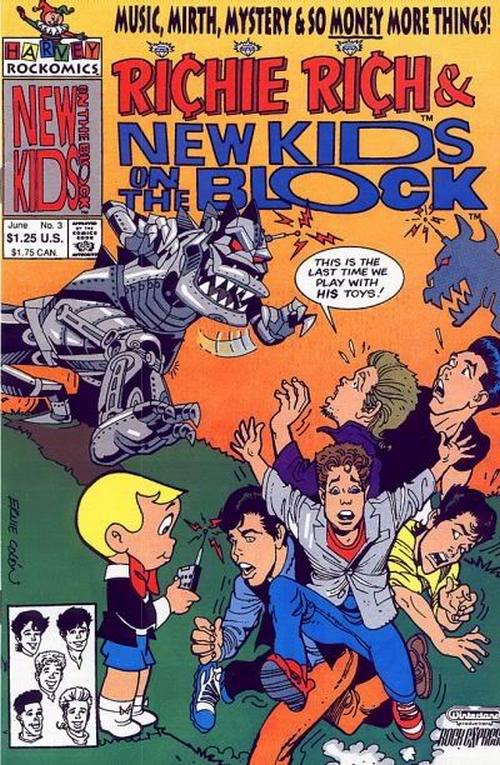 Let’s admit this one up front. KISS eventually did make some awesome comic books. When they had the good sense to get together with Image comics anyway. First though, around 20 years earlier, they came out with this monstrosity.

Made by a publisher who had given us reason to believe they were capable of much better material, this comic could probably be introduced as Exhibit A at their bankruptcy hearing for a violating a number of standard comic book rules:

• Don’t just make up whatever you can think of when it comes to back-story, you’re just bound to disappoint your audience. • Don’t simply write dialogue that vaguely “sounds like them”. It’s hard to get right and pretty much every person reading it has already heard the band speak before. • If you are going to draw the band to look like awesome superheroes, DO NOT include actual photos of them in the book that show they are pasty little nancy-boys in real life. • Do not cross them over with your regular characters, since fans will later wonder why they are never again mentioned. • Don’t make the extras more full of awesomeness than the actual comic. What’s that? What Awesomeness? Glad you asked! In the 70s, you must remember, the sheer omnipotence that is the internet did not exist. Checking out stories such as this one was almost impossible, so we all tended to believe what we were told. Because KISS was seen, at the time, to be a band of men made of pure sex-fueled man-energy, naturally their comic book had to have that next little step up into the stratosphere, right? Well, according to the article in the middle of the book, a pint of blood was taken from each member of the band and mixed in to the printing ink. For years, rumors had it that it was all B.S. or that the blood-tainted ink accidentally ended up in a printing of Sports Illustrated. Turns out it’s true though, as there exists a signed and witnessed affidavit to the fact.

Plot? Yeah, there was one, something about ancient talismans that corresponded to the band’s images ending up in the hands of 4 youths from the streets of New York. The talismans make them, as the wizard who inadvertantly gives them to them says, “kings of the nighttime world” and sort of super powerful. Dr. Doom (yes, that Dr. Doom) wants the artifacts, and so they battle him until nothing really gets resolved, and they run out of pages. 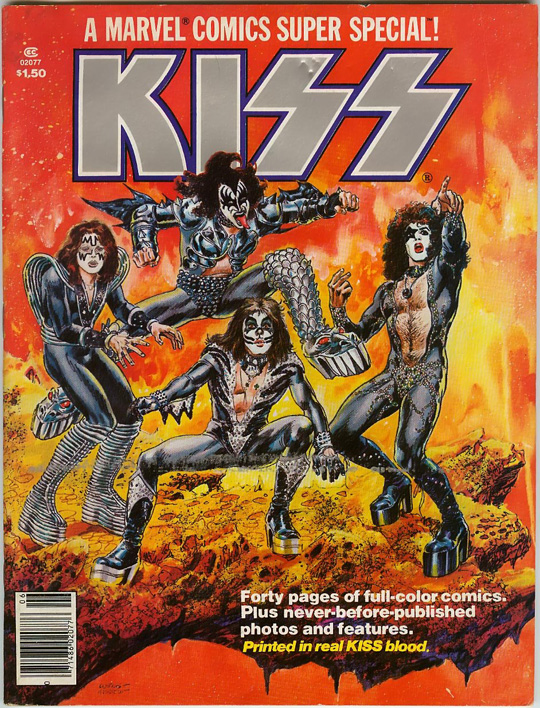