Photography, the art of capturing a single moment of time forever, is at its best when it is being horribly abused by pranksters and no-goodnicks. Whether it’s a quick Photoshop passed around by middle schoolers and endlessly chain mailed by your grandmother or conmen exploiting a national tragedy, there’s nothing quite like spotting a photo hoax to make you feel slightly better about yourself.

The image of Tourist Guy tells the story of what is quite possibly the worst vacation in the history of vacations. 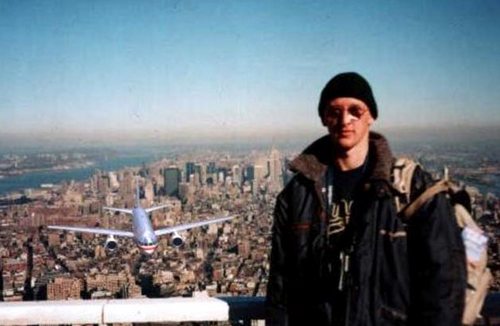 Tourist Guy began hitting e-mail inboxes shortly after the September 11th tragedies. A forwarded message helpfully explains that the man in the photograph was posing for a photograph as the plane approached. The shot was taken only seconds before the plane struck, slaying both the tourist and the photographer. However, the camera survived, I guess. Though this is purely speculation on our part, it can be assumed that the photographer was Ray Charles, because you would have to be blind to miss the giant plane approaching.

The photo was eventually revealed to be the work of a Hungarian man. The photo itself was taken in 1997, sans the jet, which he added shortly after the attacks to help lighten the mood with his friends. He didn’t anticipate the image reaching as far as it did or the story being pegged onto it, but those are the risks you take when you’re an insane artist.

Believe it or not there was a time when America was proud of George W. Bush. Well, we tolerated him at least. His first term saw the most shocking loss of life on American soil in history – we were both angry and terrified, and he comforted us by promising sweet, sweet vengeance. But the funny thing about war is that eventually people stop caring for it and want to move on. But that’s not how cowboys do it, ya yellow belly! Yee-haw! Bush was never much of a public speaker and questions of his intelligence were posed well before he stepped into office. However, once he was actually our president (for two terms, no less) “Bush is retarded ha ha ha” jokes were just as common as really terrible Seinfeld impressions were during the nineties. But with the advent of the Internet age and the wonders of a pirated copy of Photoshop, people could now share their opinions with greater ease and go viral. No, Bush didn’t try to read a book upside down and yes, despite strutting in from the set of Hee-Haw he is a functional adult human being. What is it about aviation disasters that we find fascinating? Is it our failed attempt at thwarting God’s cruel design that paralyzes us with fear? Is it seeing so many innocent lives snuffed out in mere seconds that draws us to news reports? Or is it the impossibly slim chance that you might see a dead body cartwheel through the air while on fire that keeps us glued to our televisions during these times of tragedy? I can’t say, but in my professional opinion yes, it’s probably the cartwheel things. 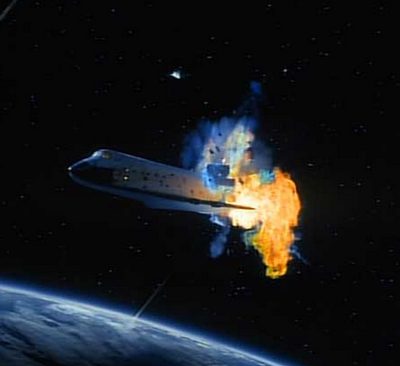 On February 1st, 2003 the NASA Space Shuttle “Columbia” exploded, killing all seven crewmembers onboard. The craft’s destruction was a keystone of mainstream news for weeks but there wasn’t any actual close-up footage of the explosion itself (there had been some video taken from the ground, however). These images are actually taken from the film Armageddon. Why someone would think to shock strangers with the opening sequence to a second-rate Bruce Willis movie I will never know, but chances are this isn’t how those brave astro-men and women wanted to be remembered.