Movies have always been littered with badass characters, ranging from soldiers to gangsters to knights to cops to, well, pretty much anything you can think of. But how often do the movies really show men of faith as all around ass kickers? We’ll answer that for you: almost never. But if you look back over the history of cinema, believe it or not you can actually find some pretty badass priests, and we’re not even counting dudes who might get in on a technicality like the Knights Templar or, ya know, the Jedi. Here are some examples of some of our favorite badass movie priests.

Now you can’t make a list of awesomely badass priests and not start right at the top with the one and only Father Lankester Merrin. Portrayed in the Exorcist by Max von Sydow, Father Merrin is the go-to guy when your young daughter starts seriously misbehaving. You know, by like, spewing pea soup all over the walls and crab walking up and down the stairs. Oh, and telling people that their mother’s suck… well, you know what’s, in, well, you know where. Oh those crazy preteen hormones.

Anyway, what we’re saying is that when the devil grabs hold of your little girl, Father Merrin is the guy you want to call. We’re also going to cheat here and include Father Damien Karras, Merrin’s protégé, who jumps in when Merrin dies of a heart failure during the exorcism and wrestles the demon straight out of little Regan MacNeil and sacrifices himself to kill it, as a secondary badass priest in this entry. Oh, um, spoiler alert? Eh, if you haven’t seen the Exorcist by now, we really don’t care about spoiling it for you. 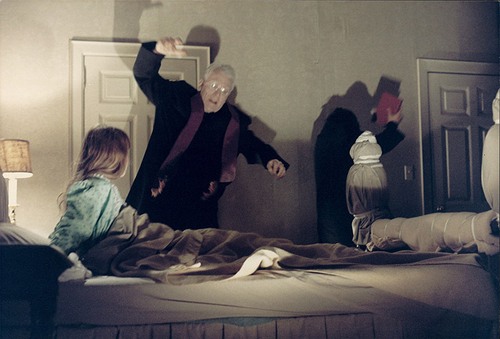 If you’ve never seen the movie Equilibrium, don’t worry, virtually no one else has either. It’s a futuristic kung fu type of movie starring Christian Bale as John Preston, a priest-slash-warrior-slash-cop sort of dude, living in a world wherein emotions and any form of artistic expressions are suppressed and strictly forbidden. In other words, it’s a world without Yanni, and that’s a world we can get behind.

In any event, Preston misses a dose of his emotion suppressant and starts to realize that things are a little, well, dull in the world, and he eventually joins forces with a resistance movement and uses his kung fu skills to beat up on Taye Diggs and overthrow the oppressing regime. He also uses lots of swords in the movie and slices dudes up, which we’re not sure something our Sunday school teacher can brag about having done. 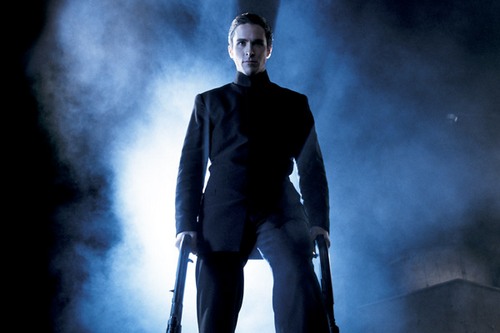 He doesn’t wear hockey pants… he wears a collar!

Now here’s a guy most of you have probably never heard of. Father McGruder from the film Dead Alive (also known as Braindead), an early film from now legendary director Peter Jackson, is without question one of the most badass priests in the history of film. Why? Because he unleashes a wrath of biblical proportions on the undead. That’s right, at long last we’ve got a zombie fighting priest!

As if a zombie fighting priest didn’t make McGruder enough of a badass, he’s officially known in the script as “The Kung-Fu Priest.” Let’s just say that if the end ever comes and it brings with it zombies, and you’re one of those people who will flock to the nearest church to find salvation, make sure Father McGruder is there delivering one of his zombie-kicking sermons. 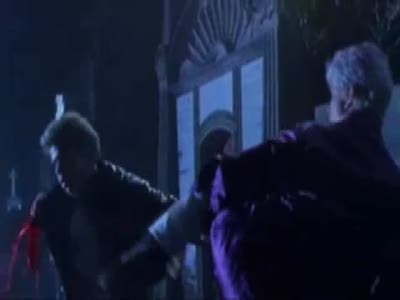 “I kick ass for the Lord!” – Actual Quote

Another film that probably not a lot of you have seen is Machete, the Robert Rodriguez directed film starring Danny Trejo in the titular role. The movie was actually born out of one of the many fake trailers in the film Grindhouse, and the fake trailer was so popular that Rodriguez and Trejo actually decided to turn it into a real movie. And in that movie is Padre Cortez, played by Cheech Marin. Yes, you read that right: infamous pothead Cheech makes our list of the most badass priests in movie history.

Why, you ask? Well, as the brother of Machete, Padre Cortez is equally adept at both saving souls and sending them to Hell with his trusty shotgun. Of course, maybe he should have toned down on the whole blasting shotgun holes in people, since he suffers the rather ironic fate of being crucified later in the film. 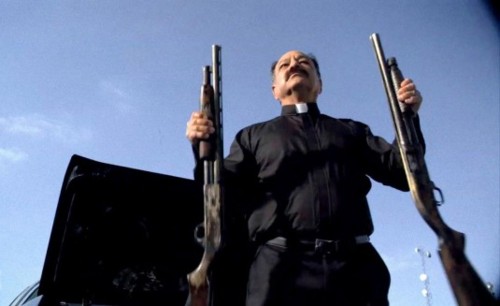 Okay now, Reverend Shooter is actually a bit character and he is technically… well… a little bit evil. But you can’t deny that in his brief time on screen in Hot Fuzz, he’s a pretty righteously badass holy man, even if his motives are a little skewed. Played by actor Paul Freeman, the same guy who most famously played Indiana Jones’s rival Rene Belloq in Raiders of the Lost Ark, Reverend Shooter seems to be on the up and up in the small town of Sandford…

…until Sergeant Nicholas Angel of the Sandford PD waxes philosophical about right and wrong (after having gunned down half of the town’s evil crones), and that’s when Shooter finally gets fed up with his bull, says “oh, f*** off, grasshopper” and whips out dual pistols and starts firing on Angel. Of course, since he’s a villain he misses, but it’s still one of the most awesome scenes involving a priest in recent movie history. 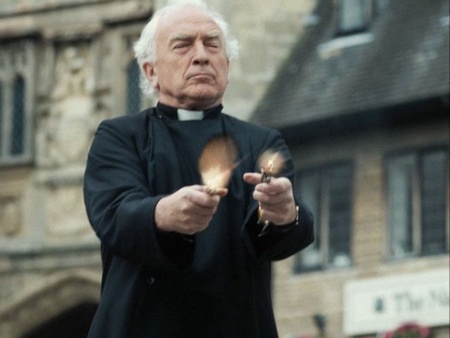 He’s probably just mad that people only remember “Shaun of the Dead”.

And of course, if you’re going to talk about a badass movie priest, you have to go with a vampire fighting ass-kicker simply named “Priest” in a movie called, well, “Priest.” Okay, so maybe they could have been a little more clever with their names and titles, but it doesn’t change the fact that in the movie starring Paul Bettany, who has apparently decided that he needs to play an intimidating man with religious implications lately (between Priest, Da Vinci Code and Legion, anyway). Anyhoo, he takes the whole “Kung-Fu Priest” thing and cranks it up to eleven.

After his niece is taken by vampires, Priest sets out to get her back despite the fact that the church has strictly forbidden him from doing so, because if you’re going to be an ass kicking priest you might as well be a rebellious one while you’re at it. Anyway, throughout the course of the movie, Priest finds new and inventive ways to absolutely manhandle every vampire he comes across, splashing blood and vampire guts at the audience in 3-D. Because you know you always wanted to know what it feels like to have a vampire spleen hurtling toward you. 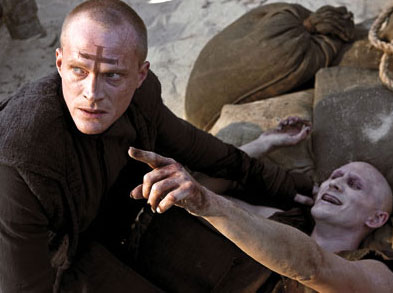