One of the more interesting aspects of pro-wrestling over the past ten to fifteen years is that the bigger a jerk you are, the more fans you gain. The “cool/funny heel” is an almost-instant ticket to success. Sadly, when it comes time to officially make said jerk a good guy, their personality tends to suffer greatly. They become watered-down and neutered in their attitude, like pretty much all of your college buddies that had kids before age thirty.

On very rare occasions, the nice guy act works. John Cena was a cool heel who turned into a smiling, family-friendly good guy; he has made millions of dollars and headlined several WrestleManias in doing so. But, for every John Cena, there’s more than a few characters who do fine as a prick, but go nowhere when it’s time to start smiling and kissing babies. Like so: 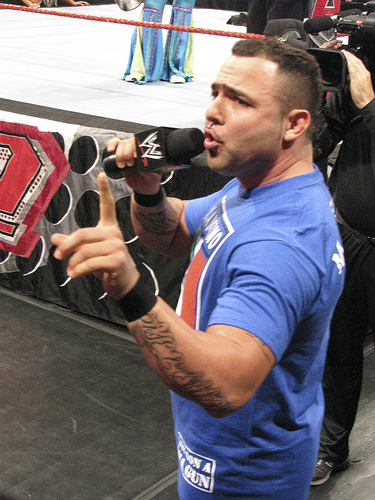 At his most basic, Santino is an Italian stereotype. He speaks like Super Mario, mangles his English, comes out to a rock-opera theme song, eats nothing but pasta, and is generally a loser who may or may not still live with his Mom.

He started as a bland good guy but, when he embraced his inner misogynistic wannabe lothario, he took off. He was hilarious, a natural improv artist on the microphone, and even had his own online video series, Santino’s Casa, where he would riff on anything and everything in both the worlds of wrestling and popular culture. He won the Intercontinental Title and started a campaign where he was determined to beat that title’s longevity record. He didn’t even come close, but the story where he kept bragging about inching closer and closer to the record every week made him extremely popular with a large chunk of fans.

Sadly, after his title reign ended, his descent into goodness began. And yeesh, did it ever suck. The wit and misogyny of his character faded in favor of dressing up as his own sister so he could win a women’s battle royal, an ugly fake unibrow that couldn’t be made sexy even if Gisele Bunchen sported it, and a new personality that was less hilarious and more “eyeball-rollingly retarded.” 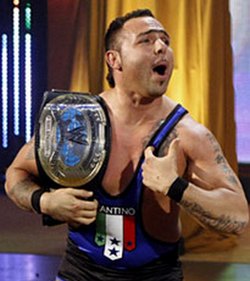 Awww, it thinks it’s a wrestler. Dat’s so cuuuute.

He hardly ever wrestles, hangs around with Monday Night Raw’s useless celebrity guest hosts for very little explainable reason, has absolutely nothing of interest to say anymore, and is generally treated like a special child who is allowed to run around and play and be stupid because to toss him out into the street where he belongs would probably be considered negligence and abuse at this point. And shockingly, fans don’t care about him anymore.

John Morrison is Jim Morrison. Except he’s a wrestler. And he doesn’t sing. And he’s not drunk 48 hours a day, 10 days a week. Also, he’s not dead. But other than that, he’s totally the same guy. Both of them really hate shirts for one, so there’s that. 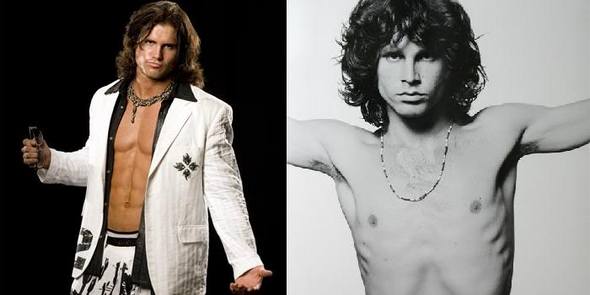 Not like Jim had a good reason to be shirtless though. Did he ever eat?

Interestingly enough, John Morrison’s claim to jerk fame comes not from pretending to be a dead 60’s musician, but from basically being the good-looking jock that treats people like crap just because he can. You want to hate him because there’s a good chance he hates you too, but he’s so funny with his insults that you can’t help but root for the guy as he verbally cuts people to shreds.

He got over quite well acting this way, to the point where he too got his own web series. Called The Dirt Sheet, it basically consisted of him and his tag team partner Miz (a Real World alum who played the part of the cool jock’s even louder and more obnoxious best friend) making fun of anyone who wasn’t them. When it came time to split the team up, most everybody assumed that Morrison would become a huge star, while Miz would fade away and maybe show up on another reality show on his way to rehab. 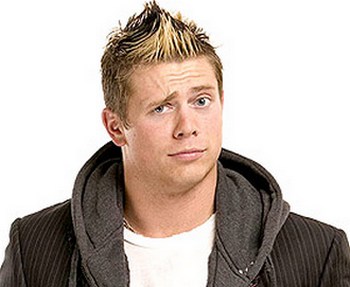 Didn’t happen. Morrison, as a solo good guy, became the blandest piece of plain white toast you will ever see. As a nice guy, he had nothing of note to say, his gentle attempts to make fun of bad guys fell flat because he wasn’t a jerk about it, and he hasn’t won a meaningful match in the past 276 years (give or take.) Meanwhile, Miz is a bigger jerk than ever, and a bigger star than ever to boot. It kinda makes you think twice before helping that old lady carry her groceries to the car, now doesn’t it?

About 20 years ago, in the early 1990’s (the early 90’s was twenty years ago? We are so friggin’ old) a wrestling clown debuted. Yeah, a clown. On the surface, it was everything that made us ashamed to call ourselves wrestling fans. A guy dressed a stereotypical Bozo T. Clown, pretending to be a wrestler, did not exactly scream sophistication.

But if you watched a little bit of the man, you realized that he was an evil clown. That actually worked, and the psychopathic nutjob who dressed as a children’s character in order to pop our balloons and beat the snot out of our heroes actually made something resembling sense. Characters like DC Comics’ the Joker and Krusty the Klown of “The Simpsons” fame work so well because many people are convinced that clowns are sad, dark and evil little creatures under all that makeup anyways; Doink just added further evidence to the theory. 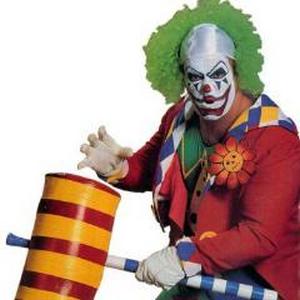 Then he became a good guy. And all that stuff we just mentioned about a wrestling clown being everything that made us ashamed? Well, now it actually DID make us ashamed. Why would a happy clown wrestle? Why? He wasn’t dark and demented, he was goofy and silly. He didn’t pop our balloons and make little kids cry; he hit bad guys in the face with pies and made them slip on banana peels. None of this made sense, not one iota. An evil guy who beat people up while dressed as a clown is psychologically interesting; A happy guy who kinda beat people up while dressed as a clown is boring and ridiculous. And the crowds basically fired the guy after a few months of happy clown nonsense, if their endless chants of “KILL THE CLOWN! KILL THE CLOWN!” were to be believed. 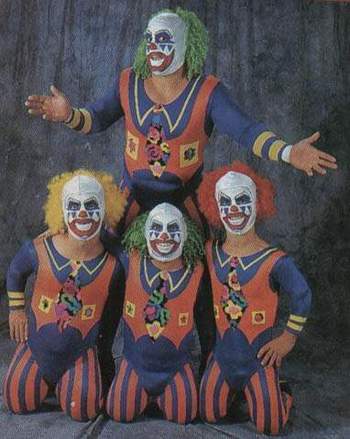 Hopefully the killed the midget clowns too. That was almost too scary.