Ear-piercing demon-babies, ridiculously loud ringtones, foul mystery odors and wet umbrellas wedged in your scrotum…welcome to the hellish world of public transportation. If you live anywhere on the planet with a transport system then chances are you’ve encountered the same types of shit-mannered mutants we’re about to describe. In fact, you may be one of them, in which case go fuck yourself. 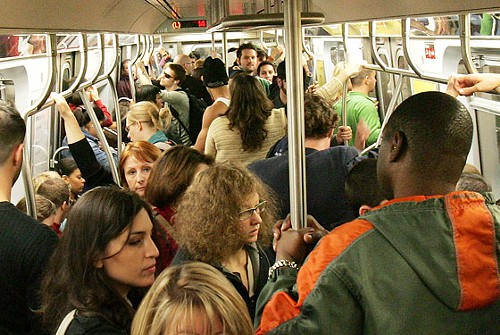 We despise everyone in this photo.

As a New Yorker, the author has had so much experience on this subject that the mere sight of a train or a bus makes him want to set something on fire. New Yorkers raving about commuter war-stories is as common as the elderly bitching about Dick Cheney “hogging all the good parts”. Most of us take our bitter tirades over to Subwaydouchery, Twitter or sites such as Gothamist. I however chose to write this article for Weirdworm, as a means to organize and document my rage. Maybe it’s appropriate that I’m writing this section while on the subway. Sitting directly across from me is a woman with a fever blister mumbling about slitting her husband’s throat when she gets home. If she follows through, my guess is she’ll be doing him a favor. It’s now 9 pm, if I make it off this train alive; I’m hoping my night improves. Yeah I know what you’re thinking, I could always take a cab, but where’s the inspiration in that? 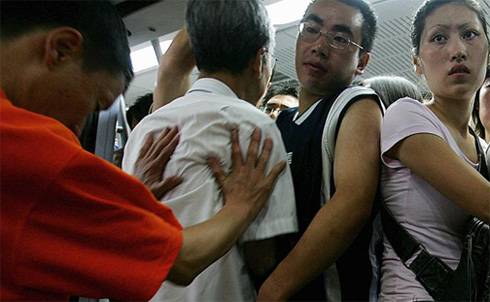 The first group of assholes I’d like to target are those who aggressively ram their paths through crowded buses and trains. These types of vermin are about as well-mannered and considerate as Mel Gibson at the Carnegie Deli. We’ve all encountered shovers on our daily commutes. Despite the basic laws of physics and public safety, these potentially dangerous morons thrust their ways onto the most jam-packed rides. Sometimes they’ll even rudely push their way on while yelling “there is more space” when in fact there is none. Sadly their inability to see through people renders them unable to perceive shopping bags and musical instruments where perhaps a person or two could fit (in theory). Nevertheless, they almost always seem to be running late and absolutely insist on getting aboard no matter what. That is, until someone mans up and informs them otherwise. 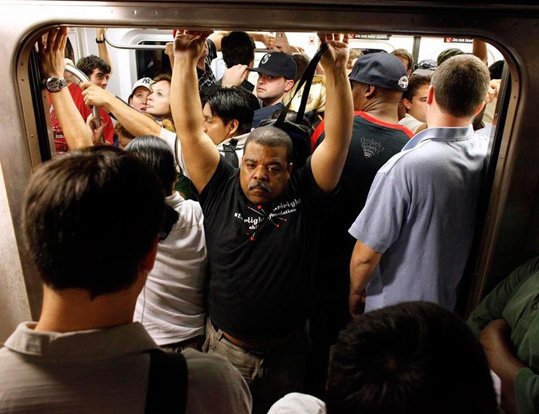 Here’s a guy who’s had enough the horse-shit.

For a character such as this who pushes their way through life, something like trampling grandma or squeezing an infant back into its mother’s uterus is simply considered collateral damage. As most of us probably know, they specifically hire people to shove riders onto trains in Japan. However, last I checked Japan had yet to conquer the world so people who do this sort of crap on their own are pretty much just self-appointed scumbags. As a rule of thumb, if a ride is so packed that a Smurf couldn’t squeeze its blue dick on if he tried then you and your briefcase probably won’t fit either. 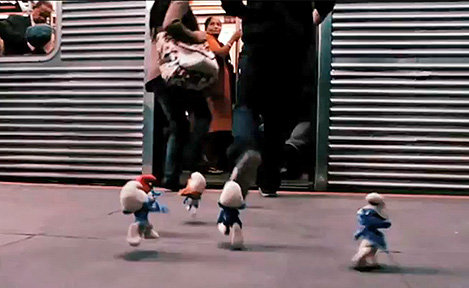 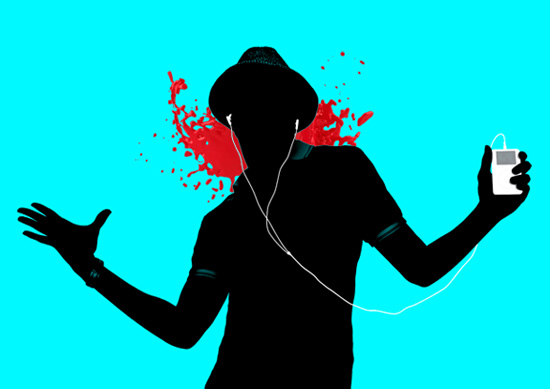 When it comes to music we all have our favorites. But far too many jack-offs either don’t know or don’t care that others around them would rather not hear their horrific playlist. Naturally, the ‘music lovers’ I’m speaking of have no reservations playing whatever suits their stupid ears as loud as humanly possible. You see this sort of intrusive bullshit everywhere. In the street, idiots will drive by BLASTING garbage you couldn’t be paid to listen to. Or if you live in an apartment your neighbor may enjoy Celine Dion played at 140 decibels while she masturbates. Trains and buses are no different. What you’ll usually encounter on an average commute is people thoughtlessly blasting their iPods loud enough for Marlee Matlin to feel the vibrations from 20 feet away. Perhaps one day karma will step in and deliver one of these folks a brain aneurysm. 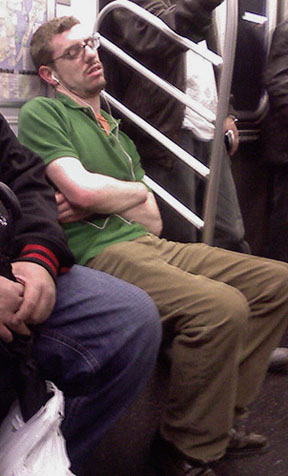 You’ll know it occurred if they remain still for a while and evacuate their bowels.

Speaking of happy endings, here’s a personal story related to this topic where a measure of justice was served. I was on a train last week and something that looked half-teenager and half hobgoblin was sitting a few seats away from me blasting his iPod. He was listening to something that sounded like a mash-up of Wookie torture porn and horses being castrated, but that’s beside the point. Needless to say, freak-boy missed hearing an important announcement about our train going express and failed to get off where he should have. I cannot adequately describe the pleasure I had watching him grow furious as our train blazed through the next 10 stops. Clearly his inattentiveness made him late for whatever hole he was headed toward. 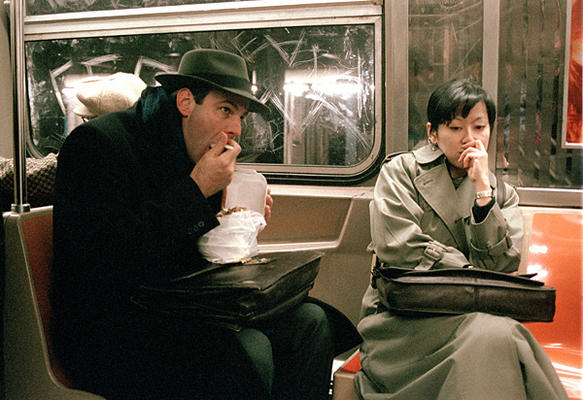 As anyone with an ounce of courtesy knows; if you get hungry during your commute, simply waiting until you get off to eat in a comfortable setting (such as home or a park bench) is the best way to go.

But for the more bold among us, saying fuck it, and pigging out on a four course meal while cramped next to numerous pissed off riders is clearly just as good. Of course the simple fact that doing so is ridiculously inconsiderate doesn’t seem to faze such people. For those of you reading this who are on the “to hell with you, I’m eatin’ whenever n’ wherever I want!” side of things, consider the following. Eating while aboard public transportation creates unique and often horrid aromatic combinations. For example, take the smell of shrimp mei fun and combine it with the stench of dried piss. What you get is an offensive stink that absolutely nobody wants to endure for an entire ride. Now if you don’t care about people having to smell whatever noxious taint you create, then don’t be surprised if you choke and nobody bothers to help you.

THIS infamous youtube video plainly shows the potential damage eating on a train can cause. And by ‘damage’ I mean ass whooping. Which brings me to the next topic… 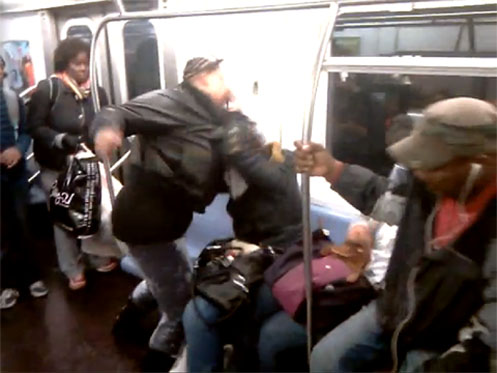 As I just mentioned, sometimes arguments and fights can break out between commuters. These conflicts are triggered for any number of senseless reasons. What is it that makes people prone to fighting during their commutes? Well if you’ve actually read up to this point then you should realize it’s a miracle most rides don’t contain at least one Royal Rumble. On a related note, many of the most popular videos on the internet are shaky phone cam battles that took place between raging commuters. For reference purposes, here are some clashes I stumbled on during downtime at work the other day.

While the aftermath of these absurd arguments and amateur battles was a zillion youtube hits, the fact of the matter is when you’re trapped on the same ride as these people; it’s just not as entertaining as it is watching from a distance. Furthermore, the depressing reality of fights breaking out while in such cramped and already hostile atmospheres is guaranteed chaos. Not to get preachy but before you gladiators start clenching your fists because someone took your seat, consider the possibility of weapons being drawn and innocent people being hurt. A parent taking their kids home from school wants to do just that… in safety. Nobody wants their family caught in the middle of idiots engaged in sudden Mortal Kombat.

Number one on my list is a type of person that’s earned their spot in the depths of whatever hell your religion places evil souls to dwell for eternity. A ‘space hog’ is anyone who exists for the sole purpose of getting in the way of others and needlessly taking up as much room as possible. There’s absolutely no escaping their oblivious behavior or their clunky personal items. Space hogs come in all shapes and sizes, but make no mistake, they are assholes of the highest order and should be treated as such. 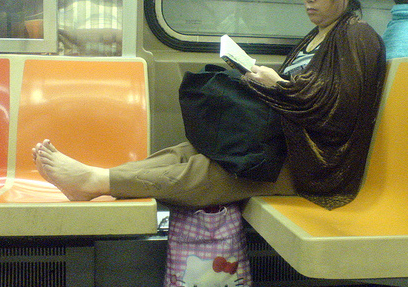 Even if all they have is an asinine Hello Kitty bag and their trash, a true space hog will still manage to make their presence known.

If a space hog takes the form of a woman with a purse, guaranteed that stupid purse will be plopped in an almost “fuck you” fashion on the seat right next to her. Go ahead – dare ask her to move it so you can sit down. Prepare for some huffing and puffing as well as getting ‘accidentally’ jabbed with that purse for the remainder of the ride. Space hogs also take the form of sleepers… Maybe he’s dreaming about a world where trains are equipped with hammocks. 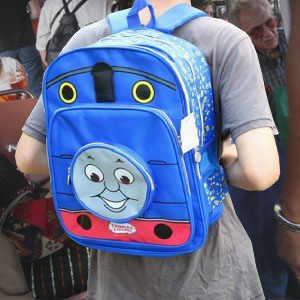 Thomas the Train, welcome to my sh*t-list. And even people with bulky furniture who somehow aren’t aware of the existence of moving trucks. I’d also like to toss into the mix a few other deserving candidates. Let’s not forget the tourists with comically oversized maps, ancient mummies with walkers, mothers with unwieldy baby carriages who insist on riding with rush-hour crowds, bicycle riders who apparently can’t peddle their asses home and of course dudes who sit like this… 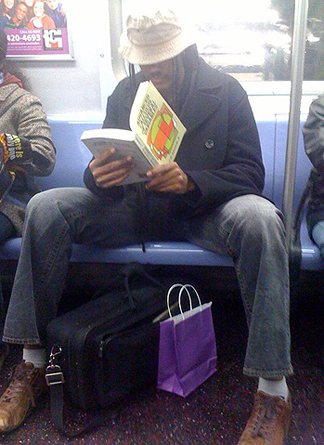 I’d have to make up new curses just to comprehensively express how I feel about this fuckery.

By now you’re probably thinking about a few major annoyances I skipped. Believe me, when it comes to public transportation nightmares, I don’t miss a single thing. Expect more of this in a future… 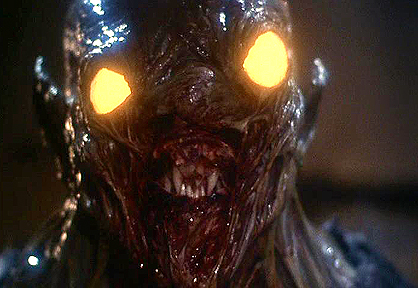