For most people, a vacation is a chance to relax and try their hand at a new and exciting experience. For other people, vacation is the chance to commit suicide in the most spectacular way possible. For those people, check out this tourism guide custom-made for you.

Mountain-biking on the world’s most dangerous road

Biking is one of the simplest forms of exercise, which is something someone should have told Lance Armstrong, as well as a chance to enjoy a scenic journey during your vacation. Biking is the kind of activity promoted in the AARP magazine for your 50th anniversary trip. However, if you choose to bring your biking journey to Bolivia, you may not live to see your 51st anniversary. 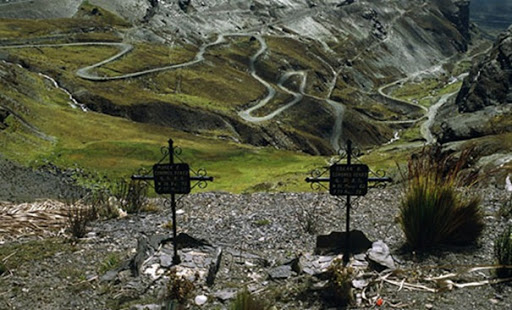 However, you both can still have graves next to the other.

That is because one of the tourist trips you can do down there is go on a scenic biking trip down the most dangerous road in the world, the Yungas Road. The Yungas Road is so dangerous, the locals pray before they use it. This is a country so fueled by drugs and drug gangs, you go through six checkpoints just to reach the grocery store, but this road still scares them.

Nevertheless, people risk biking down this road at speeds reaching 40 mph, all to view the majestic sights of over 50-meter drops to their left, and a number of graves and shrines for those who perished on the road. To guess an exact number of shrines are difficult, as it is predicted over 200 people a year die on the road. However, what can you expect from a road created by unskilled prisoners? 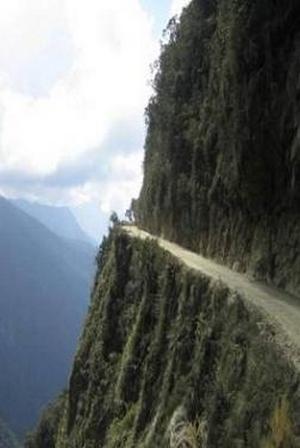 A last ditch chance to try and murder someone.

In China, there are five mountains that make the shape of a flower. These are the five sacred mountains, the tallest being Mt. Huashan, which is one of the holiest lands in Taoism. Mt. Huashan is also a very popular hiking area, with hundreds of people visiting it every day.

The fact that it is a holy area is very convenient for the travelers, because in the incredibly likely event that they die, they can save money on funeral costs, because hiking along the paths of Mt. Huashan means hiking along places like this… 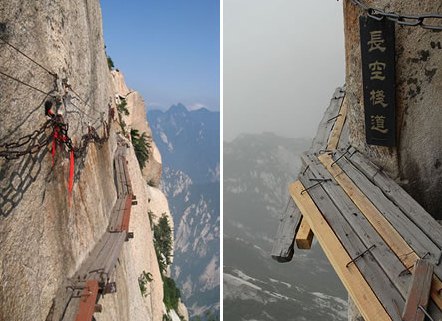 The Chinese sign says, “Why did you spend money to do this?”

Mt. Huashan is such a popular tourist attraction wherein common thrill-seekers come from around the world to hike on what is widely seen as the most dangerous hiking trail in the world. This title is probably bestowed on them because Mt. Huashan has over a 7,000 foot drop, and the only thing protecting you from falling, is nothing but some loose planks and rusty chains most likely thrown together as a high school woodshop project. 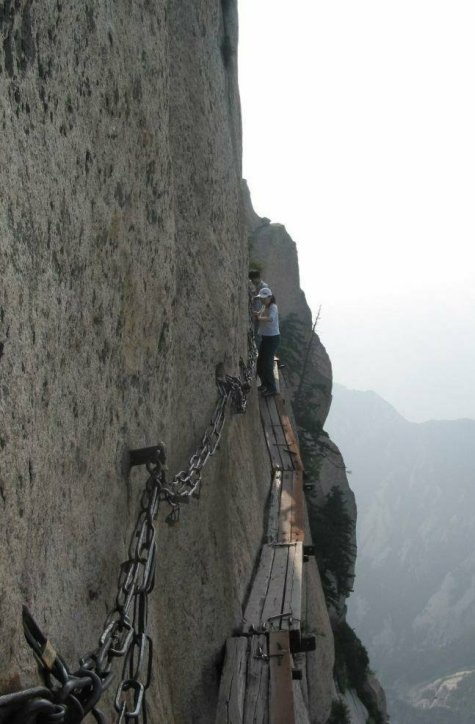 They haven’t fallen to their deaths yet, so at least it is a passing grade.

That and the fact that around 100 people die on it every year, though that number could be higher, because China is not a big fan of freedom of the press and are big fans of censorship.

Tour the aftermath of the Chernobyl disaster

Over 25 years ago in the town of Pripyat, there was the Chernobyl power plant. It exploded. That explosion caused massive radiation spikes in the Ukraine, and the effect of the blast was felt all over the world. Now, all that radiation is totally gone and everything is totally fine. Ask the people who now live at Pripyat. Oh right, you cannot, because even to this day, that place is a ghost town and a radiation hotspot. 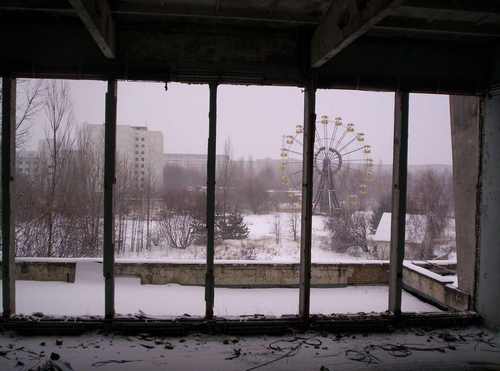 And a nice amusement park if you hate waiting in lines.

Despite being one of the creepiest places known to man, people flock to Pripyat and pay up to $250 so, they can walk among scenery straight out of a Fallout game. They can have a close look at the abandoned city as well as a closer view of the Chernobyl disaster area.

Specific tourist paths were created for tourism and while no one has gotten sick from these paths yet, God help you if you decide to stray away from the group.

Certain parts of the site are still leaking radiation, and if you venture away from the specifically designed paths, you could end up like the movie Chernobyl Diaries. A box office flop and a disappointment to customers. In addition, you could get radiation poisoning.

Volcanos are one of the many ways God likes to remind us through misery and destruction that we should all worship and admire him. In the country of Nicaragua, the people must be incredibly pious, as their active volcano, Cerro Negro, has erupted 23 times in 100 years. As a result of this constant destruction and other things, Nicaragua is the poorest country in the hemisphere behind Haiti.

Sensible people would realize volcanoes always beat everything, so they should move their town, but instead, one person named Darryn Webb created a new tourism attraction. Volcano boarding. This is when people use sleds to slide down an active volcano with a tendency to erupt a lot. It is like sledding, but instead of doing it on soft snow; you do it on volcanic ash and dirt. Fun! 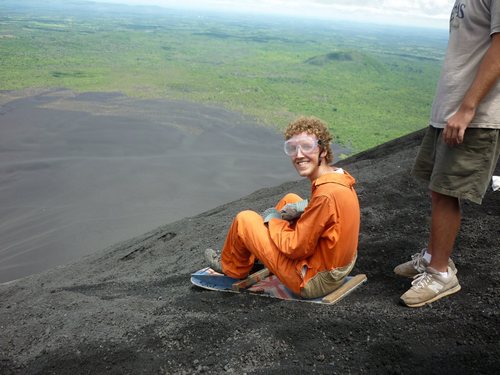 Also, instead of a sled, you get a piece of wood from a dumpster. More fun!

For the meager price of $28, you too can sled down a mound of dirt. A once in a lifetime experience that can only be replicated by sledding down any hill in summer.

Unbelievably, this isn’t the only activity involving volcanoes, which is a combination of words that shouldn’t exist. In Pucon, Chile, a tourism business revolves around the hopes that adrenaline junkies are completely devoid of all fear of death and common sense by combining the activities of bungee jumping and volcanoes.

In a tourist package, tourist’s bungee jump out of a helicopter into an active volcano. OK, not into, but within 700 feet of the lava inside. As of now, no one has died, but the idea that someone came up with bungee jumping over a volcano means that they are at least contemplating dying. 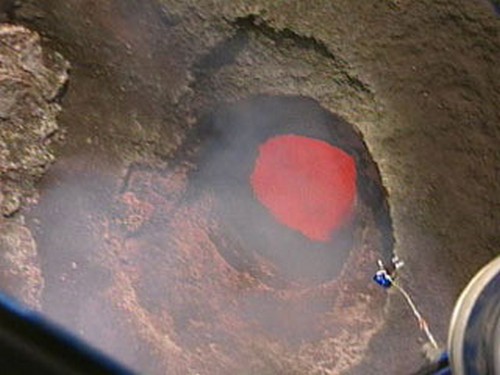 The gods demand a sacrifice.

Saltwater crocodiles are not regular animals. They are dinosaurs. They are a Sci-Fi original movie monster. In short, they are terrifying. None of this prevented the insane people of Australia to develop a new tourism attraction where you can get up close and personal with these monsters for 15 minutes at a time. 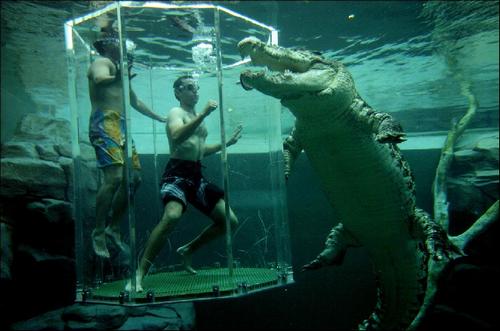 Though 15 seconds is all your bladder can take at a time.

This attraction is called the, “Cage of Death”, which sounds a lot like a Bruce Lee movie, only interacting with 20-foot crocodiles is slightly less dangerous than fighting Bruce Lee.

Don’t worry though, even though the employees honestly state that the crocodiles hate this exhibit and constantly attack the cube that people stay in, the cube is protected with a thick Plexiglas, which increases the realism for both the participants and the giant territorial reptiles whose home you are invading, and that never breaks. Well, except that one time. And the guy inside survived with all his limbs and only slight emotional trauma. So, this really is the perfect activity for a honeymoon to a wedding you already regret, or if you are a James Bond villain trying to get rid of an incompetent henchman.