North Korea banned any influences deemed “U.S. imperialistic” under Kim Jong-il. However, there have been a few signs of this easing up in the past few years, such as the opening of North Korea’s first burger stand “Samtaeseong” in Pyongyang. 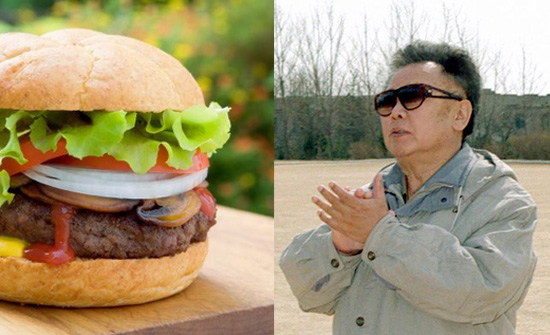 The restaurant opened in 2009 and at the time exclusively served hamburgers, waffles and draft beer. Not surprisingly, hamburgers themselves aren’t called such (again, U.S. imperialist influence) but rather are “mincemeat sandwiches.” When Kim Jong-il announced that he would construct a factory for making hamburgers he gave them the name “double bread with meat.” At the very least we can call the new name an improvement.

People looking to get a freedom sandwich in North Korea can expect to pay around $1.70, unless you live in North Korea because that’s almost twice your daily wage. Still, Samtaeseong has proven to be a popular hotspot with both locals and tourists alike, and while reviews for the burgers are still out, like it or lump it, the existence of a fast-food restaurant (with plans for more branches in the future) in the most hardline communist country in the world is nothing but a show of America’s influence. Up next: reality television and crippling heart disease. 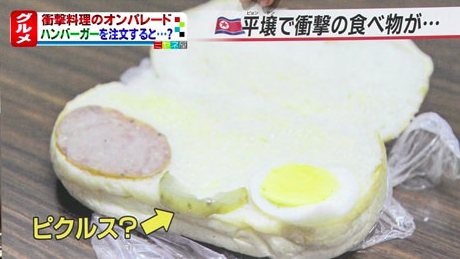 We can only assume the design has improved as well.

Often regarded as the ugliest building in the world (a dubious honor, we’re sure) the Ryugyong Hotel is a one-hundred and eight story structure in Pyongyang. Sometimes dubbed the Pyramid of Pyongyang for its strange shape, the hotel was started in 1987 and stopped in 1993. It seems unlikely that it will ever be finished as a functioning hotel, though rumors say that there’s outside interest in finishing the project. 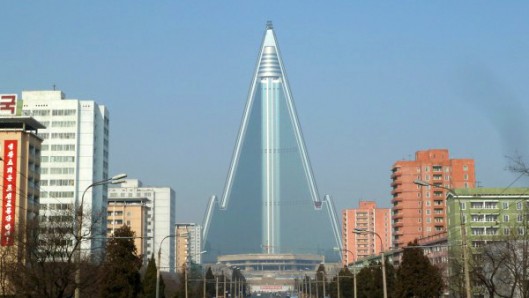 We can only assume the interested party is blind.

The building consists of three-thousand suites and five revolving restaurants, at least as it was planned. Currently it sits at the heart of the city as a concrete shell, but it’s massive size (one-thousand and eighty-two feet) makes it difficult to ignore as it dominates the skyline. Interestingly enough, however, those living in the city deny that it exists. Tourists traveling by taxi have found it impossible to use the hotel as a landmark because no one admits that the building is there. It’s even airbrushed out of official photographs.

In 1992 the Soviet Union fell, taking with it much of North Korea’s financial support. When the project was halted a year later estimates to finish it came in at around two-billion dollars. No, that’s not for a Bond-villain’s laser weapon, that’s for a hotel. Even if it is ever finished, who the hell is supposed to stay there? Even ignoring the low wages of the average North Korean, there’s no real tourism industry to speak of. If there was, they probably could have finished the damn thing by now.

The Arch of Reunification

The Arch of Reunification was erected in 2001 to commemorate Kim Il-sung’s proposal of a reunited Korea. The arch stands above the Reunification Highway, which leads from Pyongyang to the Demilitarized Zone (DMZ). The concrete arch features two Korean women dressed in traditional garb holding up a sphere with the map of a unified Korea on it. It’s one of the more thoughtful gestures from the dictatorship. So thoughtful, in fact, that it almost makes you forget about those tunnels they dug leading into South Korea. Almost. 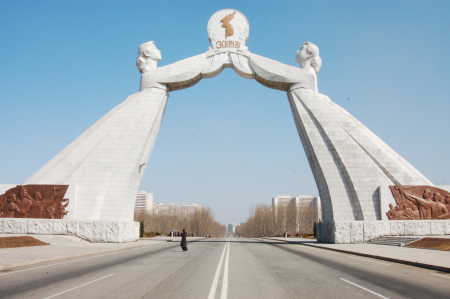 Anyway, the arch is strange for two reasons. One, the highway it stands above is largely unused. Tourists in the capital city often remark how the highway has large lanes but little traffic. The use of so few cars is attributed to the poor financial standing of the average citizen, so bikes are a more common form of transportation. But the streets are so empty that tour guides will cut across lanes on either side to avoid the numerous potholes (because it would cost too much money to properly repair the roads).

Stranger still is the belief that the arch itself serves a dual purpose. According to some (including one documentary), the arch was constructed with explosives inside. In case of an invasion the arch could be detonated to create a sort of roadblock for infantry and artillery. Of course, this could just be the musings of conspiracy theorists or North Korea telling little white lies. We may never know, but it sure does make the arch seem just a little suspicious.

What happens if you take the Ryugyong Hotel and turned it into an entire village? Kijong-dong, better known as Propaganda Village, happens. Built in the 1950s for what we can only assume was a fortune, Kijong-dong is situated on North Korea’s end of the DMZ and has a grand total of two-hundred people living in it, if you believe the North Korean government. In reality there are absolutely no residents. It’s completely empty. 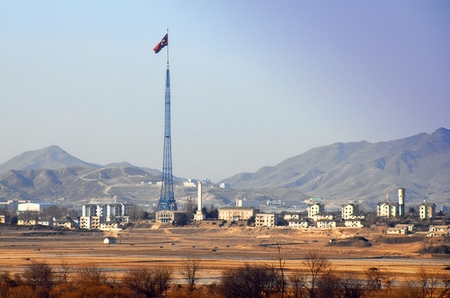 Just try to find a picture of this place that isn’t ominous.

The village was designed to show off the virtues of the North Korean lifestyle to South Korean villages in view and lead to defection. The brightly painted concrete buildings were much more lavish than rural villagers in either country could afford. Each building is wired for electricity with lights running on a timer. Skeleton crews appear at night to maintain the buildings and to give the general appearance that someone might actually be living there.

However, anyone with a set of binoculars can see that the buildings are empty, some completely, lacking floors, ceilings and even glass windows. Whether or not the village has led to defection is unknown, but it’s hard to imagine anyone falling for the trick nearly sixty years later. Amazingly, the site is still maintained.

Control of information is key to communist rule, and North Korea is no exception. In truth, North Korea doesn’t really have internet access so much as it does intranet. These websites, almost all of them government controlled, are as secluded as the country itself, and for many the only means of accessing them are through web cafes.

The country’s intranet service Kwangmyong offers no connection to the outside world. Instead, requests can be made for content. If accepted, Kwangmyong downloads, censors and re-uploads the content. However, Kwangmyong remains unattainable to most people. 90% of North Koreans are completely unfamiliar with the Internet. While it’s theoretically possible to pick up a satellite connection from other Asian ISPs, smuggling the needed components into the country is next to impossible. 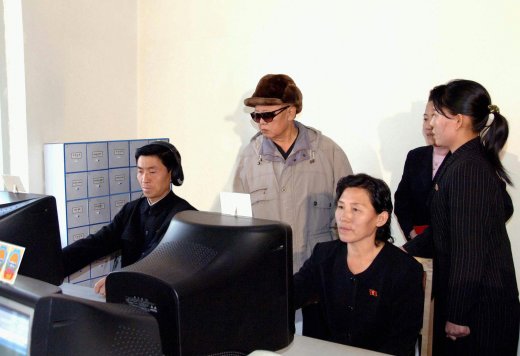 Because he is always watching.

Despite being the capital city, Pyongyang has only a few web cafes. Regardless, as of 2007 Kwangmyong only permitted access to a little over thirty different pages. Hotels in the city offer e-mail services. However, users aren’t permitted to type their messages directly. Instead they must be written and handed to an employee. Many tourists have noted that their messages are never received (and probably never sent).

North Korea is unable to host their own web pages and as a result rely instead on China, Japan, Germany and even the United States for servers. The government elite, however, have unfiltered, unlimited access through satellite connections with Germany.