Home Food & Beverage 5 Strange Candies From Around the World

Children love candy and unfortunately, as a so-called “adult” you’re often expected to provide it for them during birthdays, holidays, sporting events, after they skin their stupid knees, etc. While this can be a chore to feed these ungrateful monsters, we wouldn’t say ‘no’ if you decided to give them any of these candies. Of course, we’re talking about candies like the…

1. Foam Shrimp and Bananas and Eggs

We’ve always secretly known that our British cousins across the pond are a bit strange in how they do things: they drive on the wrong side the road, they despise coffee in all its many and incredibly tasty forms, and their country is sort of ruled by a grandparent more attune with handing out boiled sweets than representing the country to the wold.

However, we can add a new one to the list: their candy are shaped like shrimps and bananas, because obviously if there’s any type of food you want to be associated with sugary deliciousness, it’s got to be goddamns shrimp, right? The banana we don’t have anything against because that’s actually pretty standard and isn’t commonly found either as part of a cocktail or living underwater, which we think is a huge difference.

The more astute of you will also have noticed that they’ve included eggs into this devilishly stupid mixture; because obviously if there’s a candy that you want, it has to be one that represents something like coming out of a chickens butt. Wait, we already made this sort of joke, right? That just proves how stupid this thing is then.

From Latin America, we have this strange product. Now, we’re not sadists, and we don’t have anything against a mango flavoured chewing gum because that shit sounds delicious and nutritious to boot. However, coating it with chilli powder makes us want to find whoever invented this awful, awful thing and beat them to death with something ironic. A chilli plant for instance. Or a mango. Or a mix of both. Or a giant bag filled with the frozen tears of all people who tasted this chewing gum thinking it was edible for humans and then had to go to the hospital to have their stomach pumped.

Also, what is it with that name? Rockaleta sounds like a band that Courtney Love might decide to set up one day, but then again if there’s anything that makes us think of ripping our insides out for relief from the pain that is travelling through our bodies, it’s the music of Courtney Love. 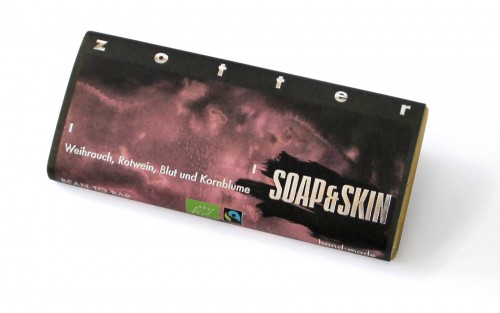 We should probably point out though that blood only makes up 0.4% of the total ingredients in this chocolate bar, we don’t know about you but that’s still too high a percentage for us normal people who aren’t used to drinking blood. Also, you just know that somewhere out there, there’s a reader freaking out about this, not because of the blood thing, but because it contains whole milk and it might go to their hips. The possibility that they might get turned into a vampire though is less worth worrying over. 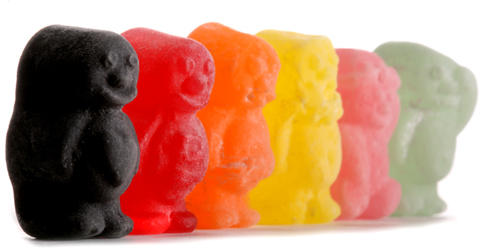 Fruit flavoured jelly babies we don’t have a problem with. Like the mango chewing gum, that shit is fly with us. However, as good as chocolate is, we don’t want that coming anywhere near our jelly babies, no way on goddamn earth. Stick it on the cake: fine. Stick it on other chocolate: fine. Making it a flavour of jelly: all of the no’s that ever were, are and are to come. We think our position is quite clear on this. Whoever created these should be locked up alone in a windowless cell for year and years with only these things to eat and let’s see how this was such a good idea in the first place.

Likewise, whilst we’re on the subject, who came up with jelly babies in the first place? Which psychopath thought, “you know, I think I’d like to eat some jelly, however, it needs to be in the shape of a small smiling child before I think I could truly enjoy it”.

Oh, Jesus Christ. You know that when we said chocolate goes with pretty much every everything, that does mean that some things aren’t meant to be covered by the dark brownish ambrosia of the Mayans, right? Fuuuck. We would seriously like to meet the person who ever wished they could buy this product a few years ago before they came out, and shout at them that they did this themselves, and cry in their arms as they stroke our hair with their weird hands because you have to be a goddamn masochist to wish for this to be real.

And, to make things worse, it’s squid. That’s like the poor man’s idea of what good seafood is. At least if you’re going to make us wish for death every time we take a bite of your product, at least put some effort into making it the very worst thing you can. What about those big squishy jelly things that you find in rock pools? What about actual jellyfish? Or what about selling people a bar of chocolate, however, the catch is that the bar is actually at the bottom of a plastic tub full of pissed off crabs who would like to do nothing more than rip someone’s fingers off.