Comic book writers use alternate realities to try and reinvent an established character or to tell stories that otherwise couldn’t be told in the established character’s universe. Some, like Frank Miller’s Dark Knight Returns, end up having a huge impact and redefine the hero. Others are, well, weird, to put it lightly.

Earth-9’s Batman is what happens when you completely throw away the Batman origin story and start over from scratch, basing the new origin on his nickname “the Dark Knight.” 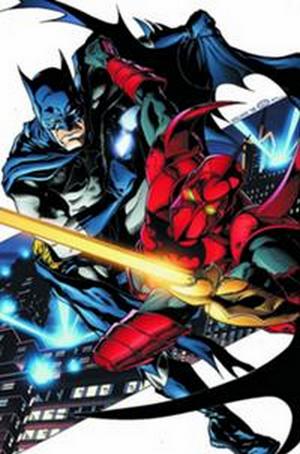 Or rather, the Bright Red Knight.

Sir William, a member of the Round Table, is seduced by Morgan Le Fay and told it would be totally sweet if he would ice King Arthur. He tries, but even with the aid of Morgan’s magic he can’t actually succeed in the act of regicide. As punishment for almost murdering the most important figure in British history, Sir William is locked up inside the Castle Bat and not permitted to leave until he atones for his mistake. Ignoring that it’s pretty difficult to do that while locked inside a castle, this is sound logic.

Anyway, at some point Sir William learns that he can project his spirit into an empty suit of armor and have it leave the castle to perform good deeds in his stead. And there’s your Batman, people. The empty suit of armor is a great swordsman, and that’s about it. In a way it kind of puts him on par with the actual Batman with that whole “no super power thing,” but at the same time it seems kind of disappointing that an ominous suit of armor written out of Arthurian legend really is just a suit of armor.

In the not too distant future, a nuclear war wipes out much of humanity and leaves the survivors to suffer a slow and painful death. Among those survivors is Frank Castle, the Punisher. 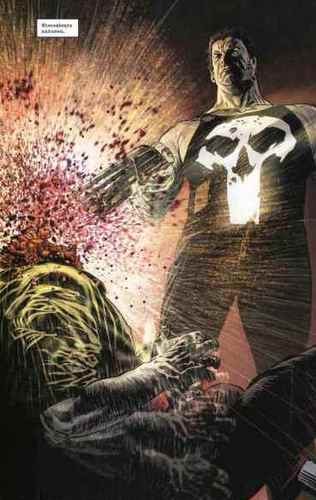 Surely this will end well.

As an inmate at Sing-Sing when the bombs dropped, Castle is able to use the prison’s fallout shelter to save himself. After a year passes he sets out to find a secret bomb shelter underneath the World Trade Center another prisoner told him about (presumably after Castle put his testicles in a vice). Tagging along on this magical mystery tour of radioactive America is Paris Peters, fellow inmate curious to see what all this Punisher business is about.

The WTC shelter is found but once inside the dynamic duo collapses. The wake up inside an infirmary and are told the radiation poisoning will kill them soon. Thankful for these diagnoses, Castle proceeds to kill the medical staff and armed guards within the bunker, slaying everything in his way until he finds his way to the heart of the bunker and uncovers the Coven, a group of the most powerful and richest people on the planet. He reveals that they are his target because he believes they are responsible for the nuclear holocaust. They explain that they’re the last members of the human race and only they can repopulate it. Naturally, Castle kills them all.

After killing Humanity’s last hope (he also kills Paris because, you know, he was a convict), he wanders back into the wasteland to die. Punisher has literally killed off the entire human race while completely disregarding his own fast and loose moral code.

What if the hardened badass Wolverine were just really, really mopey all the time? Old Man Logan answers this question with a resounding “Well, it’s kind of weird.”

In the future the United States is conquered by super villains and superheroes are nearly wiped out. Logan has taken to leading a normal, if not mundane life with his wife and two children. In a flashback it’s revealed that he killed most (if not all) of the X Mansions inhabitants when Mysterio disguised them to look like various baddies. Logan tried to kill himself by laying his head across railroad tracks, knowing well that a train wouldn’t kill him but would symbolically kill his Wolverine persona, or something. 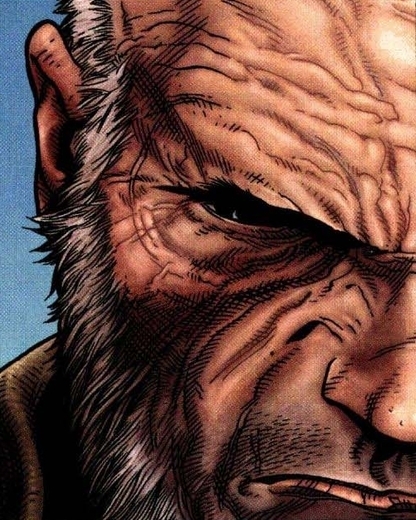 He would later go on to look perpetually angry.

Though he manages to go on a wacky and perilous adventure with Hawkeye without ever drawing his claws, he finally gives up the ghost when his landlords, the Hulk clan, kill his family for failure to pay rent (the whole reason he went with Hawkeye in the first place). Why he couldn’t find that same rage when super villains were disturbing sections of the United States like a game of Risk is anyone’s guess, but after avenging his family and killing (and being partially digested by) Bruce Banner, Logan realizes the world needs his psychotic rage and rides off into the sunset to form a new superhero team. Circle of life. 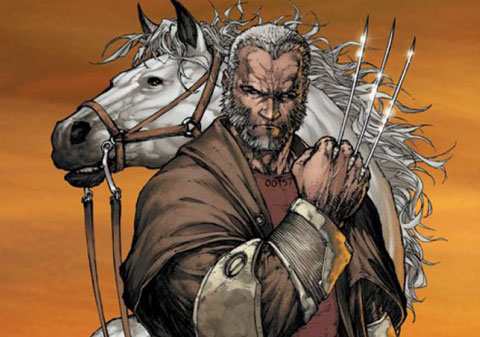 Even his horse looks like it will kill someone.

The crux of a few alternate universe Superman tales is Kal-El’s spacecraft landing somewhere other than Kansas. For example, in Red Son he lands in 1950’s Ukraine and he becomes a champion of Communism. Superman: the Feral Man of Steel sees our hero crash into the Indian jungle where he is raised by wolves. His powers are virtually the same. It’s kind of like Tarzan if Tarzan could punt a Panzer. Now known as K’L’L, Superman lives in peace until hunters inevitably kill his wolf parents, making him a double orphan of two different species. He eventually takes control of the wolf pack and swears revenge on the hunters that killed his parents. 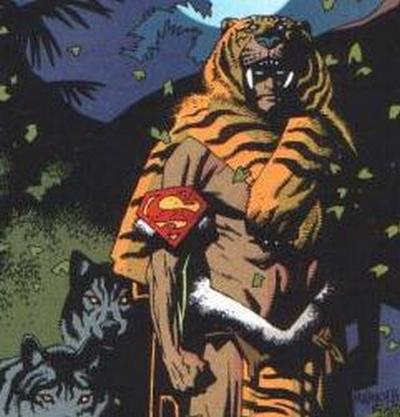 Meanwhile, Lex Luthor, ever the douchebag, has discovered a gem that miraculously weakens the strange jungle man’s unnatural strength. After Lois Lane, who is teaching K’L’L the way of humans, turns down Lex’s marriage proposal, he abducts Superman and puts him in a circus sideshow as part of a long and convoluted plan to assassinate Queen Victoria and take control of the British Empire.

What woman could deny those killer chops?

Somehow, through all of his bloodlust, Superman finally discovers his moral code and refuses to kill. The two duke out it only to have Luthor betrayed by a member of his own hunting party. Superman is knighted and the British Empire never falls.

In the far-flung future, the Earth has been ravaged by violence. Superman, old and weak, lives in a floating city with a bunch of cyborgs. The cyborgs decide that they need to nuke Gotham City because it’s overrun by hideous monsters and is unsalvageable. Superman goes to Gotham himself, refusing their plan because use of weapons is never the answer. Remember that, because it’s an important plot point. 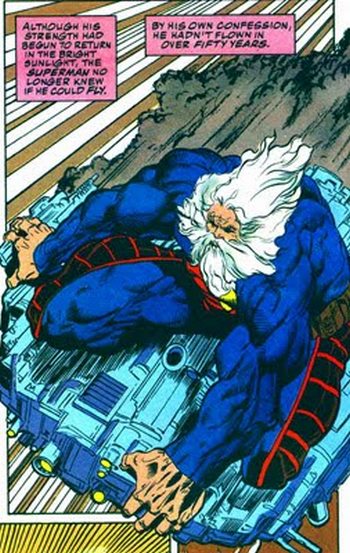 Anyway, in Gotham Superman encounters a group of teenagers hanging around the home of the long deceased Batman. Supes learns that a group known as the DNA Diktators have been abducting people and robbing graves to make monstrous clones for nefarious purposes, and that Batman’s body has been used to create literal batmen. Superman vows to fight the Diktators but realizes he’s too weak to do so. He’s offered the use of what has to be the most ridiculous looking gun in the history of firearms: 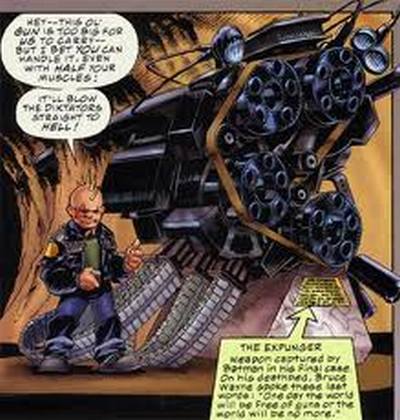 And promptly turns it down, because guns are evil and all that jazz.

Superman fights his way to through the mutants only to discover that the DNA Diktators are actually a pair of Hitler clones. Coming to the bizarre conclusion that violence only exists because of Hitler(s), he has a swift change of heart and rids the world of double Hitler with the BFG. The story ends with Superman recovering Batman’s body and walking it into a pyre, killing himself in the process. One of his young sidekicks throws a gun in after him, proclaiming that if it weren’t for guns then Superman would still be alive. Ignoring the fact that guns didn’t kill him and that he used a gun to great effect, this makes perfect sense. 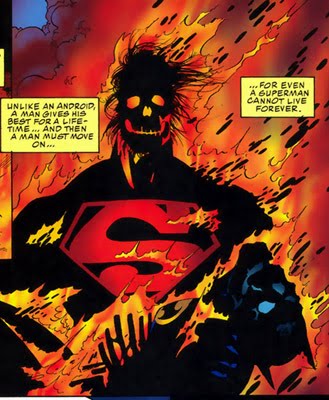 Shine on, you crazy diamond.