After The Dark Knight Rises, the regular cry comes out that Bane is unquestionably the baddest Batman villain of all time. After reviewing all of the evidence, the verdict comes back as ‘Really? Really? What kind of crack are you on? Do you really enjoy smoking crack that much?”

The time has come for many fan boys to come to terms with exactly how lame Bane really is. It is going to hurt, but this is something that it is a long time coming. Read on and you will find out that Bane is really closer to those guys who got zoinked by Adam West rather than a Voldemort who is only spoken about in hushed tones. We know that you want more than anything to love Bane. We know you want him to be Darth Vader, but read on to why Bane is merely a whiny Anakin. 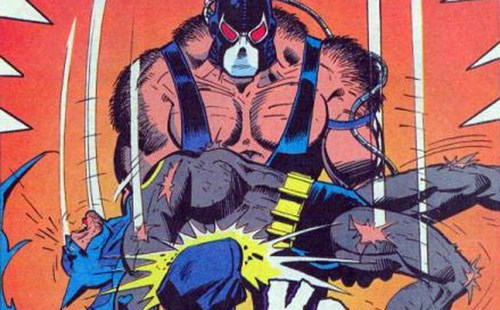 “I have now broken the last 14 percent of you. Eternal victory and glory is mine!”

Let’s examine the Knightfall storyline for just a moment. Bane concocted a strategy for defeating Batman. Bane had determined who Batman was and became familiar with his skill set. Does anyone remember how Bane actually defeated Batman? Seriously? Bane let loose every single psycho in Arkham Asylum. Bane waited till Batman had run himself ragged bringing them all back in. When Batman was beyond the point of exhaustion and Bane was at a juiced full strength, then and only then did Bane famously finish Batman off. Bane’s one master plan which actually worked started with an acknowledging of the fact that if Batman was at full strength, he would absolutely own Bane every single time. This is by Bane’s own reasoning. Under optimal situations with all of the odds in your favor and the element of surprise all going for you, then you can defeat your opponent once. Does that really sound like the path to eternal glory to you? Couldn’t any two-bit thug with a gun pop out of the shadows and finish him off at that point? 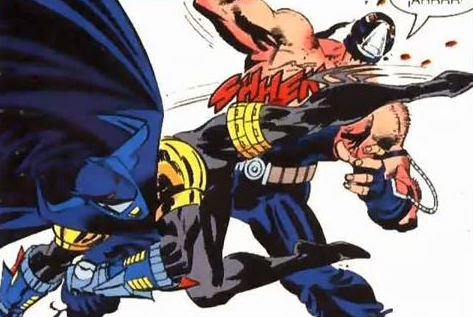 “Its my first time, so be gentle.”

If you get hosed by a stand in (no matter how good that stand in is), then your street cred is permanently shot. After Batman was broken, Jean Paul Valley and all of his religious order voodoo was just kind of there. Valley, at full strength, went out and took down Bane. Not only could Bane not beat the real Batman at full strength, Bane could not beat the replacement Batman at full strength. After Valley went insane, Bruce Wayne took the mantle back from Valley in combat and still used a cane to walk around. Wayne defeated Valley and then gave the name over to Dick Grayson. Wayne was not even at full strength for a while after defeating Valley. To review, if someone can own the guy that owned you and still walk around in a cane, then your place in the history of that guy’s greatest villains should be severely demoted. 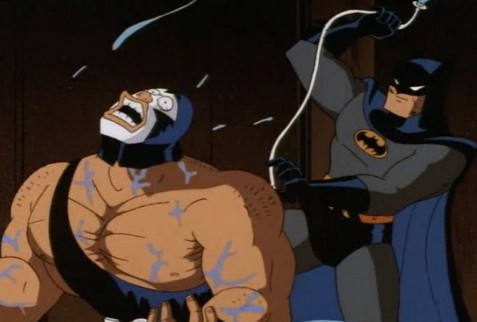 Post Knightfall, lets review the Bane-beating strategy. When Ras Al Ghul and Talia decided Bane might be a worthy sperm donor, a full strength Batman attacked the cord feeding Bane venom. In the movie Batman and Robin? They cut the cord to defeat Bane. In Batman: the Animated Series? They cut the cord… twice… to defeat Bane. In Justice league: Doom? Batman toyed with Bane… and then cut the cord. In The Dark Knight Rises? Batman was a little confused. There was no cord. In this case, you had to break the mask. If this guy was in a WWE ring back in the day, one of the Doink the Clowns could have seemingly crafted a proper strategy for getting behind a lumbering monster and cutting the cord. Doink could have even just used really big scissors in order to do it. Eventually, in the comics, there was a Venom-free Bane. So far, there is no iconic image of Bane without a glaring Achilles heel.

Bane Is Practically A Career Lackey 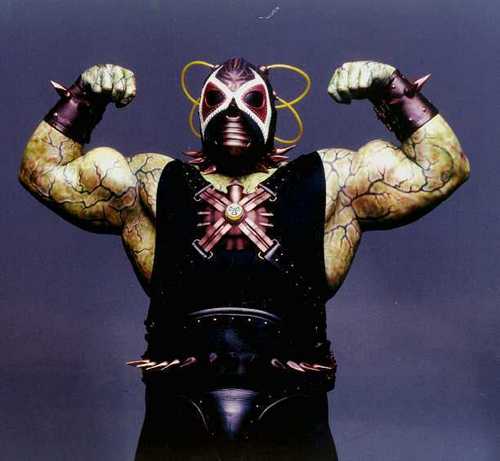 “Pay no attention to the man behind the cod piece.”

Where on Earth does the image of Bane as anything more than a glorified henchman come from? Just admit that there was only one real Bane storyline and be done with the whole thing. Do you really think the people who came up with Bane wanted to bring him back? No. That was purely fan driven. If you are going to make a character out of essentially a one trick pony, then that character is going to be a lackey. Bane’s post-Knightfall appearances are a history of playing a professional leg breaker. First, he was working muscle for Ras Al Ghul in the comics. Bane then took his juiced talents to Batman and Robin where he was Poison Ivy’s bodyguard. In Batman: The Animated Series, mobsters were able to hire Bane for strictly muscle work. In Justice League: Doom, Bane was in a team of super villains who had made careers of losing to other heroes. The ultimate Bane was supposed to be unleashed in the gritty real world The Dark Knight Rises and who is this guy? Bane is revealed to be working for and controlled by Talia the whole time. Just throwing this out… if you are going to be a main bad guy, shouldn’t you actually be the main bad guy in more than, say, one storyline? 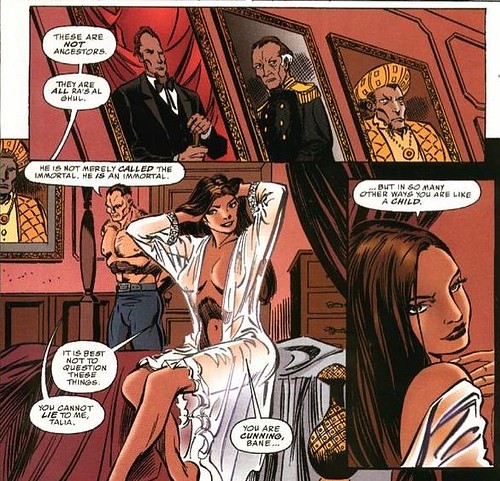 “Even if we did it, I was still fantasizing about Wayne…now there’s a man…”

In reality, anabolic steroid abusers have testicles that will lose the ability to make testosterone. If the situation goes on long enough, their testicles will essentially wither on the vine and they tend to end up with woman boobs. Over time, this entire situation can lead to sterility, impotence, and yes an inability to even get an erection. In short, Bane’s grapes probably don’t have any juice left in them. There can be a lot of components in ‘Venom’ but at its base, there has to be a synthesized steroid. Athletes who regain some of their testicular functions these days are generally on a regiment which also includes taking female hormones to kick the little nuts back into action. Take a look at Bane and examine his habits. There is no possibility of there being some sort of counter Venom in order to save Bane’s balls. This is a fact which is probably not lost on the organizations that hire Bane. Sure, Bane was under consideration to impregnate Talia but there may have been more than a loss to Batman which disqualified him. Bane always seems to be working for or influenced by women, but you don’t generally get the idea that anything is happening with them. When a potentially accurate description of you is that you are allowed near the harem because of a chemical castration, then you claims of ultimate badness are going to take a bit of a convincing hit.