When you get right down to it, furniture should serve one purpose above all else: it should be functional. If it is a chair or a couch, it should be comfortable. If it’s a table, it should hold your lamps, beer or maybe even your feet if you’re feeling lazy, without wobbling or collapsing. Sure, it’s nice to get an end table that looks nice, or maybe a classic wingback chair that really adds some class to your studio apartment where one window is covered with duct tape, but at the end of the day that whole “functionality” thing is really all that matters. Of course, that doesn’t stop people from coming up with some truly bizarre pieces of furniture whose purpose seems to be less about function and more about confusion and, in some cases, causing nightmares.

Technically, this oddity is called the “Fish’n Flush” and it’s not exactly furniture, per se, but it’s a fixture in every home and it’s where you wind up doing most of your sitting and thinking and, in a lot of cases, reading. If you’re anything like us, most of your Twittering is done from on the toilet as well, so we’re going to go ahead and count it as real furniture for the purpose of this article.

Look, at the end of the day there’s only one time we ever want to combine our pet goldfish with a trip to the toilet, and that’s when little Flipper becomes dead Flipper and it’s time for his corpse to take an adventurous little trip into our septic system. It’s hard enough to poop in a public restroom where someone might only hear you squeezing one out, but the thought of numerous little eyes staring at you, judging you, is just a little much for us to get over. And don’t even get us started on how awkward it would make bathroom masturbation. 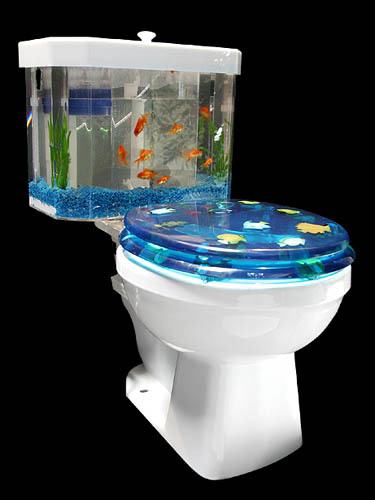 There are some pieces of furniture that we cannot even fathom anyone actually owning. Sure, some pieces of furniture are more artwork than anything else, so we can kind of understand why someone might have them in their home. It becomes a conversation piece for pretentious people, and really, that’s all pretentious people want, is for people to think they are quirky and have great style, all while ignoring the inherent douchiness of decorating your home with stuff you can’t actually use.

But what we cannot imagine anyone, ever, putting in their home is a sofa made entirely of stuffed animals. Yet apparently that is a thing that exists, and we’ve got pictures to prove it. Look, if you’re going to put a sofa made of stuffed animals in your home, you’re sending a horrible message. If you’re a woman and you bring a guy home, he had better run screaming because it’s a sign you might just be batshit insane. And if you’re a guy who for some reason has this in your home, well, chances are anyone who visits you is going to be dead anyway, because you’re probably a serial killer. 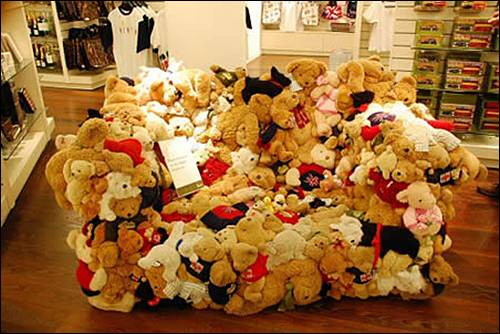 Sumo wrestling is a really popular sport in some parts of the world (well… one part of the world anyway). We get that. And we even get that people sometimes decorate their homes with apparel and furniture adorned with logos or replicas of things associated with their favorite sports. However, if there’s one sport we’re not sure we can get on board with people creating furniture out of, it’s got to be sumo wrestling. There’s nothing particularly appealing about having synthetic fat guys strewn about your home. Come to think of it, there’s nothing particularly appealing about having real fat guys strewn about your home either, but that’s neither here nor there.

But lo and behold, someone went and created the Sumo Wrestler Table. Now you, too, can place your food and drink and maybe even pictures of your kids and grandkids on the flabby back of a portly wrestler wearing nothing but a diaper. Maybe it’s just us, but we can’t really imagine it’s particularly appetizing to eat a sandwich off of a hunched over fat guy who we’re not convinced won’t come to life and steal that sandwich right out of your hand in the first place. 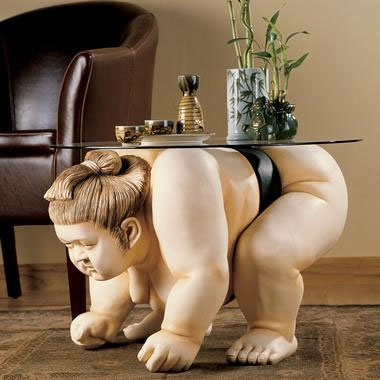 At some point, we have to think that the people who design certain furniture items are just screwing with us. Look, a bed has precisely one purpose, and that’s to allow us to sprawl out and comfortable sleep for at least 12 hours a night, and three more in the afternoon when we take a nap after our cookies and apple juice. Well, we suppose there’s another purpose, but this isn’t the Penthouse Forum. You can do that anywhere.

Anyway, those people who are screwing with us – get your mind out of the Penthouse Forum and the gutter, people – are clearly in charge when it comes to the fetal mattress. Who wants to sleep comfortably or even be able to change positions when you can, instead, attempt to sleep in an incredibly specific and confined position? We can’t imagine there’s too much of a market for this bed, but then again, what do we know? For a second there we really had convinced ourselves this was the Penthouse Forum, so clearly we’re not to be trusted. 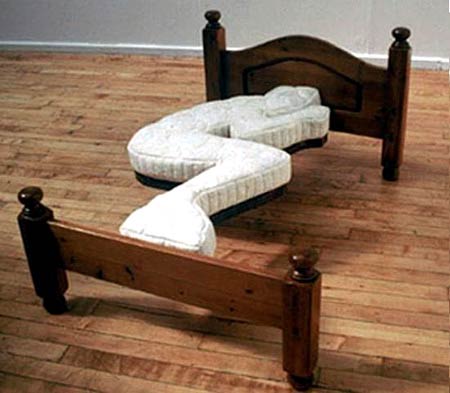 Come on, did you really think we’re talk about sexual deviancy in that last post and not continue with, well, even more sexual deviancy? If so, you clearly don’t understand how we roll around here. Plus, how could we possibly put together a list of weird furniture and include a half naked man with that sumo table, but not include one of the many half naked woman chairs that exist because apparently there’s a huge market for such things?

The submissive woman chair is, well, just wrong for so many reasons. First, you should never want to have sex with a chair, and you should never attempt to have sex with a chair, either. Just trust us on that one. But secondly, if you’re putting this chair in your home, you’re telling everyone who walks through the front door that there’s a solid chance you’ll drug and rape them, because by owning this chair you’re admitting that is clearly your sort of thing. We really do have to wonder if anyone actually owns this chair, and what the hell his or her mother thinks when she comes over for a visit. 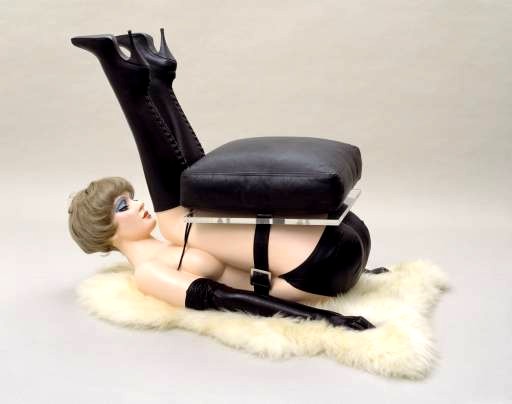