Home Home 5 Out of the Ordinary Vacation Spots

Everyone needs to get away from it all from time to time. Sometimes work is stressful and the weekends just won’t cut it and you need to head out of town for some serious vacation time. A lot of people prefer the quiet tranquility of a cabin in the mountains; others love to sip an umbrella drink on a hot, sandy beach. If you’ve got a family then maybe you take your kids down to Disneyworld so they can be traumatized by the sight of a giant mouse with big, black, soulless eyes. The bottom line is that everyone has their favorite spots to go on holiday. Of course, some people like go for something a little…different. You know, like some of these places…

The Island of Dolls

If you read stuff on the internet (and we’re guessing you do, otherwise we’re effectively just talking to ourselves) then you have likely heard of the Island of Dolls and you are familiar with all of the terror inducing nightmares it brings with it. But if you are not familiar with the Island of Dolls, well, let us give you a quick rundown on this hell on earth that has for whatever reason become something of a tourist attraction.

South of Mexico City, there’s a little island in the middle of what amounts to little more than a swamp, and on this island you’ll find all of your waking nightmares ready to greet you on what we’re going to go ahead and assume is not a family getaway. It seems that at one point several decades ago, a little girl drowned not far from the island, and the hermit who lived there soon after found several dolls floating in the water. He, for some reason, thought the two events were connected and began collecting old, tattered dolls and hung them from trees all over the island. Today there are hundreds of scraggly old dolls hanging all around the desolate little island. We can’t imagine a more enjoyable vacation than wandering around that place, the dead eyes of those dolls watching your every move, just waiting until your back is turned so they can devour your soul. 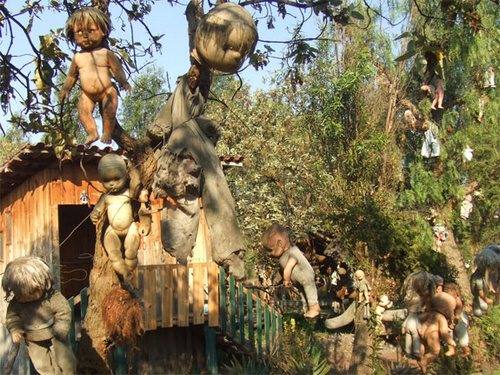 So maybe after you visited the Island of Dolls you decided that you’ve had about enough of tiny, evil looking dolls of children. You’ve determined that you’d prefer your kids to be much bigger and much less likely to come to life and murder you in your sleep. Well, if you’re making your way through South Carolina you’re in luck, because it’s there where you will find Eddie, the World’s Largest Kid. No, he isn’t some seven foot porker with glandular problems, but a 40 foot statue that weighs 17 tons that depicts a preteen boy of ambiguous ethnic descent.

Now, maybe that’s not so creepy, because aside from being humongous it looks like an actual kid. But here’s the thing: it’s not only a statue, but a “playground” of sorts, because you can climb up inside of Eddie and make your way through his organs. No, seriously, the exhibit is designed to allow you to crawl around in his brain and even slide out of his stomach when you feel like being treated as excrement. And if you guessed that you enter him through his ass, well, congratulations, you win a cookie. Of course the fact that you were thinking about entering the world’s largest kid through his rectum probably means that after you eat the cookie, Chris Hansen will appear and ask you have a seat right over here. 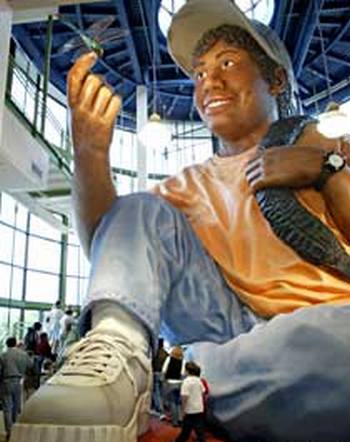 If you know anything about Billy Carter, there’s a fair chance it’s one of two things. The first is that he was former United States President Jimmy Carter’s brother, and the other is that he had his own signature brand of beer called Billy Beer. Frankly, we’re not sure which of those two things we’d be more proud to have on our own resumes, but we’re leaning toward the latter. Anyway, he also owned and worked at a gas station in his home town of Plains, Georgia, and these days that gas station lives on as the Billy Carter Gas Station Museum. You may scoff at the idea that people actually want to visit such a place, but it very nearly became a bona fide historical landmark recently, and likely would have if not for the $17 million dollar bill the taxpayers would have had to pay in order to make that happen.

For some reason, the place even has tour guides working there despite the fact that, you know, it’s a freaking gas station. Maybe it’s just us, but a tiny little gas station isn’t particularly difficult to navigate, especially when it’s got signs everywhere inside explaining anything of significance. You know, like the empty beer cans that are still littered around the interior. 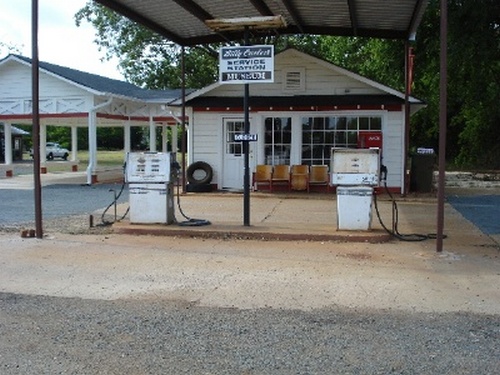 So maybe being terrified by dolls isn’t really your speed, and you’ve never been a huge fan of crawling around in the stomach of a giant child. Gas station museums aren’t really your thing, either, as they are just a little too crazy. So what’s a not-quite-thrill seeker like yourself supposed to do for a vacation? Well, you can always head to Cawker City, Kansas, to bask in the glory of the World’s Largest Ball of Twine. Oh boy, you can just feel the excitement radiating off of it, can’t you?

While we’re going to go ahead and guess that most of you have never actually been to see the World’s Largest Ball of Twine, you’ve no doubt heard it bandied about as one of the classic roadside tourist traps in the United States. You may not have even realized it was real, because it was just too ridiculous a concept to imagine anyone spending any amount of time on. But it’s not myth, it’s an actual ball consisting over nearly two million feet of twine stretching eleven feet in diameter. It’s become something of a community project in the town of Cawker City, which probably means they still haven’t discovered television there, much less the internet and pornography. 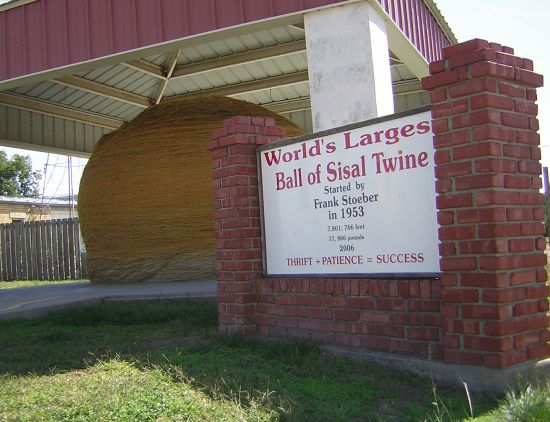 The Museum of Garbage

Seriously, what is it with people paying good money to go and look at stuff they probably have just laying around the house? First empty beer cans, then balls of twine, and now we’re talking about actual garbage? At this point, we’re just about ready to give up on the collective intelligence of vacation-goers everywhere. But yes, in Connecticut, there are not one, but two actual trash museums. According to the Connecticut Resources Recovery website – and that’s the organization that runs these museums – the museums attracted more than 50,000 visitors back in 2008, paying $2 apiece for entrance.

Call us crazy, but if we wanted to see other people’s trash we’d just save our $2 and go rummaging through our neighbor’s garbage like we always do. 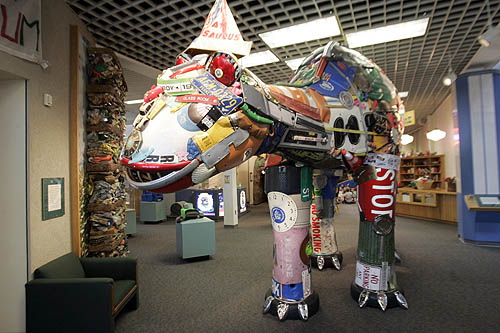 Then again, our neighbor doesn’t have a dinosaur made out of trash