Lawyers are some of the most educated people in the world today, spending more time in a classroom looking at big books with lots of words and no pictures than anybody except perhaps doctors and literary critics. And yet selection portions of the legal process are fascinating to people, and they can’t get enough of fake lawyers who ply their trade in fictional courtrooms all over primetime. Sadly, some of these lawyers are, to put it politely, rather confused about how the whole legal process works as a whole and criminal law specifically. Here are a few of the worst.

Law and Order has been on the air since the Senior Bush administration, and is still popular enough to be shown in syndication somewhere in the world 24 hours a day, 7 days a week. It has featured some of television’s greatest lawyers, such as Jack McCoy, whose incredulous expression and gravelly voice has spelled doom for many a defendant. However, it has had its share of bad lawyers. We must look to Law and Order’s spinoff series, Law and Order SVU for a particularly uncouth counselor. 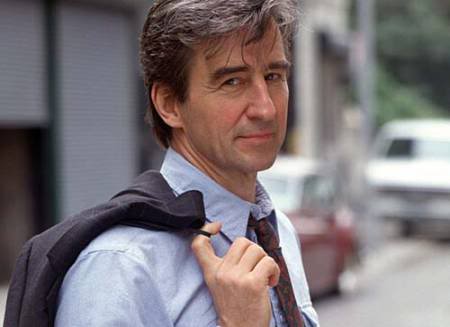 Don’t ask how he knows about that DUI last April. He just KNOWS.

Sonja Paxton was an ADA sent to work in the Sex Crimes division by District Attorney Gravelly Voice because there were entirely too many convictions being overturned in the “he said-she said” unit. She proved to be an insensitive wench who did her very best to have Law and Order fanboys screaming for her head. She didn’t get along with the detectives, the judges, the defense attorneys, and presumably, her mother-in-law. However, that’s not why she makes this list, because if getting along with your co-workers was a job requirement, 75% of America would currently be unemployed. 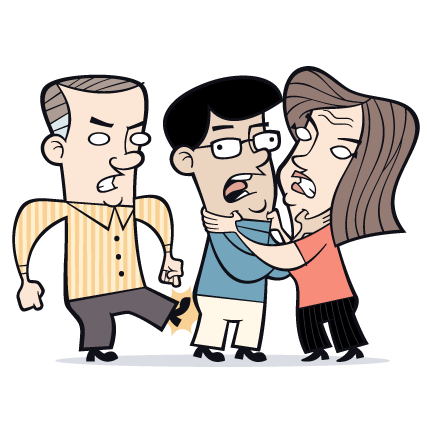 Just a normal Tuesday at the office.

No, the reason she makes this list is because of the case outline in the episode “Hammered.” In this episode, a businessman falls off the wagon after being sober for a year, gets inebriated, and brings home a woman he met at the Hole in the Wall. For reasons known only to Jack Daniels and Jim Beam, he proceeded to beat her head in with a hammer. After the detectives prove the case, ADA Paxton strolled in, and brushed off his defense that alcohol made him do it. She claimed that alcoholism isn’t a disease, and drunks are “weak people who can quit anytime they want.” She has a cool looking CGI recreation of the murder, complete with blood spatter, then, just because she can, I suppose, Photoshops the murderer’s face on the model. She knows she can’t show that picture to the jury, she claimed it was just for him. Just look at her. Everything about this woman calls for her immediate and public execution.

At court, either because of a catastrophic blunder, or bad karma catching up with her, she accidently plays the animation showing the murderer’s face. The defense objects, the judge yells, and Paxton is up Fudgesicle Creek without a Popsicle stick. A mistrial seems likely, and the murderer was going to walk. Paxton decides to do whatever she can to make things worse, and the next day shows up to court almost an hour late, stumbling and incoherent. She is recognized as being drunk, and is subjected to a breathalyzer right there in the courtroom. She is determined to be legally intoxicated, and arrested. We find out later that Paxton is an alcoholic herself, and fell off the wagon after the video mix up. She’s disbarred and sent to rehab, the killer is set free, and gets away with murder. The hypocrisy of this case is enormous, and we’re going to go with Detective Stabler’s assessment that Sonja Paxton was a walking clusterf… chuckle.

Perry Mason was one of the first TV police dramas, it taught TV producers that people will watch folk in trouble with the law, and it paved the way for CSI and all of today’s crime shows. 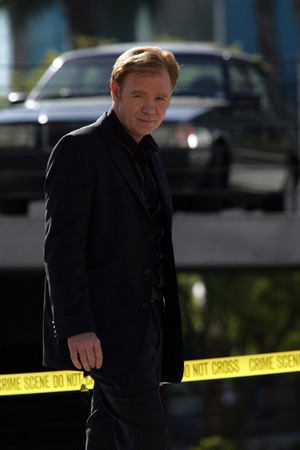 This character (and his sunglasses) brought to you courtesy of Perry Mason.

Unless you’re either a baby boomer or a creepy dude who lives with his grandparents, you’re probably unfamiliar with Mr. Mason, so let me fill you in. He’s a lawyer, except he’s also freaking Supercop. Every single client he takes on, he gets acquitted. Not just found Not Guilty, literally all the people he represented were innocent of the crimes they were accused of, and most of the time, Mason outed the real killer as being in the courtroom or even getting the guy to confess on the witness stand. Keep in mind that this guy is a defense attorney that works in Los Angeles. That is an awesome record. But, since we’re a cynical bunch and we are talking about TV’s worst lawyers, not the best, let’s look at the other side of the coin and point out the incompetency of the Los Angeles District Attorney, Hamilton Burger. If every single client represented by Perry Mason is innocent, and Mason always tells you who the real killer is anyway, why in the Sam Hill does this guy keep indicting people represented by Mason? He should take one look at Mason when he walks in the courtroom, and drop the charges. But that leads to a more disturbing question. Perry Mason represented hundreds of clients throughout the show’s run. That means that, on hundreds of occasions, this attorney accused the wrong guy of murder (and lesser crimes) and put him on trial. If Perry wasn’t there to bail them out, this guy likely would have put hundreds of innocent people in jail. How does this guy even still have a job? Keep in mind that the DA is an elected position, literally anyone could have run against him, and used his court record to make sure Mr. Burger was laughed out of office. Plus, look at this guy. He’s just a doofus.

That is this guy’s entire prosecution strategy. Boy, it’s a good thing no real criminals went on trial in this show, or Los Angeles would be even more of a crime filled Hell hole than it is now.

I bet you people are really confused now. Everyone knows about the Addams family, even if they’ve never watched it. You didn’t even know he was a lawyer, did you? I can see why. 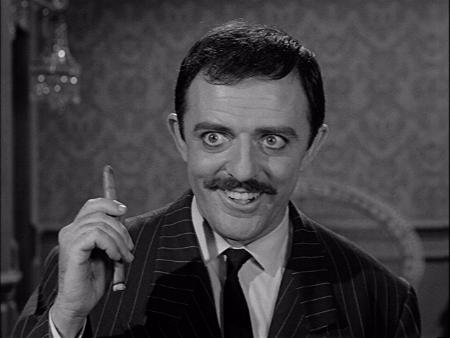 Jack McCoy, he is not.

But, he is a lawyer. He was voted by his law school class “Least Likely to Pass the Bar.” Somehow he did pass the bar, and in a few episodes of the show, he proves it by going to court and completely failing to be any kind of competent counselor. He seems to take a perverse pride in losing cases, bragging to people about how many criminals he’s put away – as their defense attorney. In one episode, he refused to let his client be sworn in, informing the judge that the whole truth would “cramp her style.” He defeated a lawsuit by paying off the other side. He was once thrown off a case by the judge, only to bring in his wife to represent his client instead, whispering instructions in her ear. Plus, the man blows up model trains as a hobby. There are clearly a few screws loose.

Okay, more than a few.

Matlock was the direct descendant of Perry Mason up there, using basically the same format: a super fantastic defense attorney represents only innocent people accused of murder in Atlanta (a surprisingly high number, obviously.) Matlock, however, took things a few steps further. First of all, they chose an interesting person to play Ben Matlock: 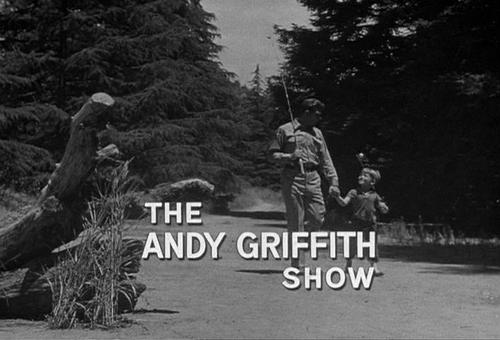 I’ll give you a hint: it isn’t the child.

Griffith played a good character, though, so let’s move on from that. Matlock is a bad lawyer because he has his job title confused. Matlock has a raging urge to solve the crime himself: he’s always talking about finding the truth. Well, what if the truth is that his client is guilty as sin? He doesn’t use the insanity defense, or any other tricks normal lawyers use to defend their client, his strategy is always “My client didn’t do it.” He proves this by promptly going to the scene of the crime, discovering evidence the police somehow missed, handling the evidence himself, thus ruining the chain of custody, never bothers to inform the district attorney about this groundbreaking evidence that clears his client before presenting it in open court, and always gets the killer to confess on the witness stand. There are so many ethics violations there; it would take you a week to figure out on just what charge the old man gets at his disbarment. 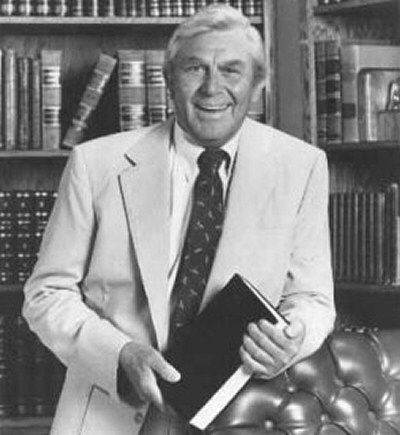 To be fair though, he’s totally rocking that suit.

Ah, CSI: Miami. The first of two spin offs of the Jerry Bruckheimer spectacular set in Las Vegas, Miami took a bold new direction for the franchise. David Caruso, selected to play the lead Lt. Horatio Caine, is physically incapable of playing a geeky lab tech like William Peterson’s Gil Grissom, so in Miami, all the CSI’s are packing, and as the show has progressed, Caine and Co. have done less science and more shooting people in the face. 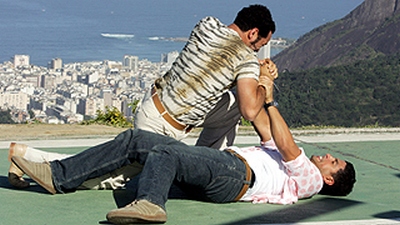 With the occasional stabbing, just to shake things up.

No one really liked Monica West from the moment she showed up. She promptly became a pain in the ass to the crime lab, detaining relatives for marijuana possession, refusing to cooperate with the CSIs in their noble attempts to put away bad guys, and generally being a mean person. West suspected something was dirty in the Crime Lab, and she was going to prove it at any cost. She tipped off the FBI, and planted a mole in the Lab in the form of Natalia Boa Vista, a stone cold fox who had nothing but good things to report about the people she worked (and slept) with. 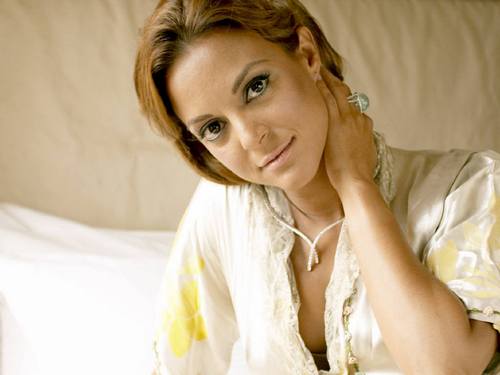 If there was a Ladies of Miami Dade PD Bikini calendar, she’d be July.

So, West went to plan B. If she couldn’t find any dirty activity in the Lab, she’d invent some. After all, the ends do justify the means, right? She put her nefarious plan into action when she noticed that her fiancé, the Secret Service agent, had neglected to seal the evidence envelope containing drug money seized in a raid. While he wasn’t looking, she swiped a stack of bills and hid them, then informed the FBI that someone in the lab was stealing evidence. They tore the place apart looking for proof, interrogated all the CSIs, exposed Natalia as a mole, and got nowhere. The CSIs traced the money back to the Secret Service agent, who revealed what had been done. Then he got West to confess to him while wearing a wire. So, she lost her job for sure, is probably going to go to prison, and her fiancé called off the wedding because she almost got him fired. All so she could expose a crime lab that wasn’t dirty in the first place. Smooth plan, and definitely makes you one of TV’s worst lawyers. 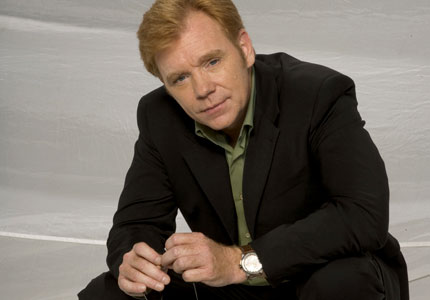 Seriously, if you can’t trust this man, who can you trust? No one, that’s who. [removes sunglasses. “Won’t Get Fooled Again” by the Who begins to play.