Roughly half of all people who watch NASCAR do so to watch cars smash into each other at 150 miles per hour. They won’t admit it, of course, but everyone knows full well that’s why they’re willing to sit through long green flag runs, watching cars circle the track while announcers with obnoxious Southern accents speak in foreign tongues about “wedges” and “pushes” and “half round out of the right end.”

But, you can see where they’re coming from, on occasion. On those accidents where no one gets hurt, cars are not on fire, and fans don’t have debris flying towards them, accidents can be downright cool to watch. Here are the best of the best, the pileups that have entered NASCAR lore as the most awesome in NASCAR history.

Bristol Motor Speedway is NASCAR’s smallest track: a half mile for one circuit of the track. This place is called Thunder Valley because of the combination of 43 cars revving their engines in a small space with a crowd 150,000 strong. The tiny track is a hotbed of exciting races, the close quarters allowing for more bumping and rubbing than on a larger track, and as a result, more crashes. 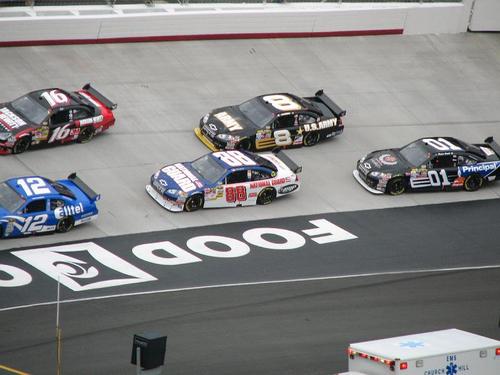 Your typical rush hour traffic, except it’s at 90 mph, and you actually get to hit the other cars.

Our number 5 crash takes us to the 1999 Goody’s 500, where it was a match competition most of the race between two NASCAR legends. Dale Earnhardt was already considered one of the greatest drivers of all time, with 7 championships, 70 wins, a fantastic mustache, and a badass nickname to boot: The Intimidator. 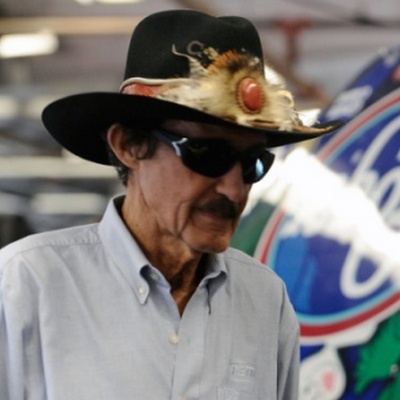 His opponent was Terry Labonte, NASCAR’s Ironman, who held the consecutive races started streak at the time, as well as 2 championships. For 495 laps, Earnhardt’s black #3 car and Labonte’s yellow #5 car traded the lead, until a late race caution set the stage for a 5 lap showdown. Labonte decided to pit and get fresh tires, while Earnhardt stayed out, giving him the lead, and putting Labonte back in 5th. When racing resumed, Labonte took off like a rocket, passing cars left and right with his fresher tires until he was in 2nd place, then bumped and slid his way past Earnhardt to take the lead as the white flag waved.

As the cars went into Turn 2, Earnhardt spun out Labonte, sending his car careening into a half dozen other cars as Earnhardt went on to win the race. In a post game interview, Earnhardt would say “I didn’t mean to wreck him, I just wanted to rattle his cage a bit.” Labonte, understandably, felt differently. Especially considering…

The rivalry between Earnhardt and Labonte, particularly at Bristol, started at this same race 4 years earlier. At this point in time, Earnhardt was the defending champion, and Labonte had only one, going on to win the 1996 championship. With 10 laps to go, Labonte led by a wide margin, with Earnhardt caught in traffic. But, somehow, the Intimidator maneuvered through traffic while still gaining on the leader. However, he leveled out with Labonte still holding a 1.5 second lead over Earnhardt. 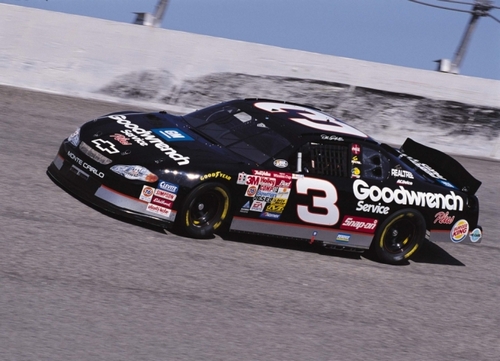 It doesn’t matter how big a lead you have, he will get you.

With the white flag waving, it appeared Labonte would win by a comfortable margin. But then, out of nowhere, slow lapped traffic appeared, impeding Labonte’s progress and allowing Earnhardt to catch him, getting right up on his bumper.

Earnhardt slammed into Labonte’s bumper, knocking him sideways into a lapped car, and then into the wall, crossing the finish line sideways and ruining the front of his car. However, unlike the ’99 race, Labonte managed to keep the lead and win this race, but it started a feud that would only get worse four years later. Sort of like…

Talladega Superspeedway. NASCAR’s longest, fastest, and some say, most exciting track. It is the exact opposite of Bristol, stretching 2 1/2 miles that allows speeds in excess of 200 miles per hour. It is here that drafting is used: two cars hooked bumper to bumper that allows both cars to drive much faster than either could by themselves. 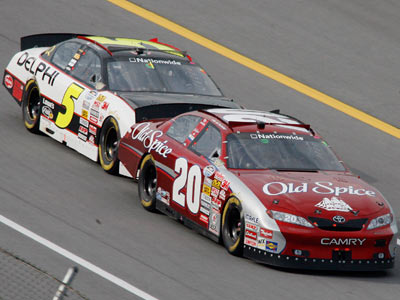 It has the unintended side effect of making the back car look like it’s humping the front car.

The 2009 Aaron’s 499 was an exciting race, as for the first time we saw the two car tandem drafting that would go on to become the standard at all restrictor plate races from that point on. On the last lap, Carl Edwards in the 99 car held the lead, his drafting partner Brad Kesolowski in the 09 car. Chasing them down were Ryan Newman in the 39 and Dale Earnhardt Jr in the 88. Edwards and Kesolowski built up enough of a lead that the other two couldn’t catch them, so Kesolowski felt comfortable to make his move for the lead and conversely, the win.

Edwards got loose by the changing airflow between him and Kesolowski, and his car turned. Still moving at 200 miles an hour, Edwards spun around and up the track. Newman and Earnhardt Jr broke off trying to avoid Edwards, but Newman couldn’t get out of the way in time, Edwards slamming into the front of Newman’s car, absolutely destroying it. But it had a worse consequence for Edwards’ car, the collision combined with the high speeds catapulting the car up into the air and into the catch fence separating the cars from the spectators. 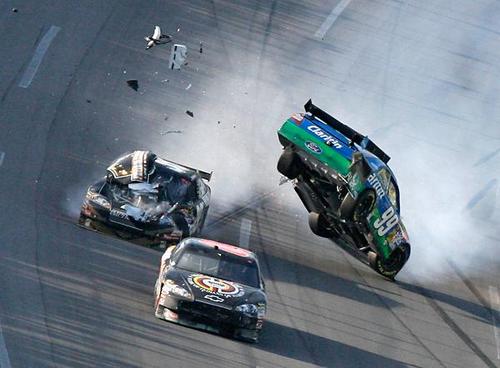 This is not what racecars are supposed to do.

Thankfully, the fence did its job, keeping the car from going into the stands and likely killing several people, but nonetheless, pieces of debris flew into the crowd, injuring several people, including one woman with a broken jaw. Edwards was unharmed, though his car was totaled. Kesolowski won the race, while Edwards pulled a Ricky Bobby and got out of his car and walked across the finish line. Though no one thinks Kesolowski did it on purpose, he certainly wasn’t very apologetic about it, and the two drivers would swap paint and wreck each other out several times over the next couple of years.

For this next crash, we take you way back to 1976, our nation’s bicentennial year, and to the greatest pure racing rivalry in the history of NASCAR. Richard Petty, statistically, is the greatest driver in the sport, his 200 victories, including 7 in the Daytona 500, is far and away the most all time. His 7 championships tie him with Dale Earnhardt for most all time. It was only fitting that this man was called “The King.” 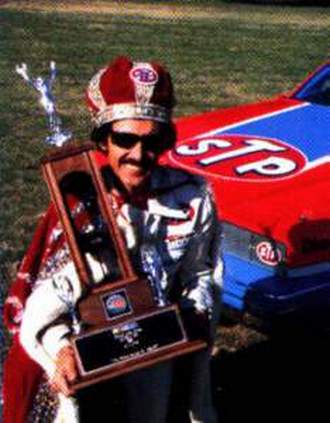 He had a crown and everything.

The other half of this rivalry was David Pearson, the Silver Fox. His 105 victories rank second behind Petty, and he wrangled 3 championships of his own. What made the rivalry between these two so great was that they were always competing with each other for the win. The two finished 1-2 a record 63 times. The most famous of those finishes came at the 1976 Daytona 500. The 500 is the biggest race of the season, NASCAR’s Indy 500, and it’s also the first race of the year. This was before races were shown on TV, except on programs like ABCs Wild World of Sports, however, a race recap is available.

On the last lap, Petty and Pearson swapped the lead twice before they hit each other and both cars smashed the wall before spinning into the infield. Petty’s #43 machine went the farthest, coming to rest a mere 150 feet from the finish line. All he had to do was limp across and he’d win. But the car was stalled, it wouldn’t move. Pearson’s #21 car came to rest back at the entrance to pit road, but his car was able to move. At a snail’s pace, Pearson coaxed his car to meet the checkered flag and win the race, his only Daytona 500 win in his Hall of Fame career, in what ranks as one of the best Daytona finishes of all time. However, it’s not the best, that honor goes to…

Without a doubt, the most famous, the most important, and the most awesome crash in the history of NASCAR happened in this race. To understand why, you need to have the scene set for you. February, 1979. A massive snowstorm had blanketed the entire East Coast in the white stuff, trapping people in their homes and in front of their TVs. At the same time, CBS was broadcasting the Daytona 500, the first time a NASCAR race had been shown in its entirety. So now you had a massive TV audience, most of whom had never even heard of this “stock car racing” thing before. The stage was set, all the race had to do now was hold their interest. 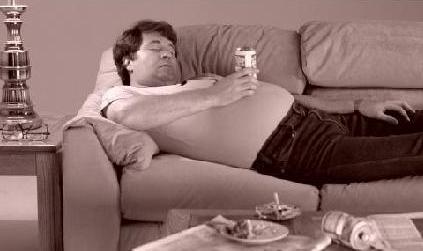 How hard could that be?

What they were treated to was one of the most exciting races in history. It was a free for all, cars swapping positions like they were trading cards. As the race wound down, two cars took a sizeable lead: Donnie Allison and Cale Yarborough. Yarborough was a 3 time champion who was going for his third 500 win, while Allison was trying to escape from the shadow of his older brother Bobby with his first major win.

Yarborough attempted to slingshot past Allison on the backstretch to take the lead. Allison refused to give ground, and Yarborough wound up in the infield grass. He lost control of his car, and slammed into Allison. They collided once, twice, then hit the wall before sliding down into the infield, both out of the running. Richard Petty, running third at the time, came around to win the race. It wasn’t just the accident that made this race so memorable. 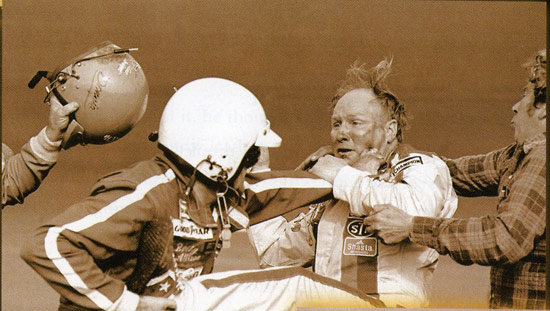 It was the state of Yarborough’s hair.

Obviously the two drivers were pissed off after the way things turned out, and began to argue when they got out of their cars. Tensions boiled over when Donnie’s brother Bobby stopped at the scene to help his brother. Bobby walked up to Cale and in Yarborough’s own words, “started beating on my fist with his nose.” 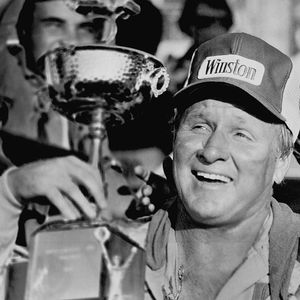 “I whipped him good, is what I’m getting at.”

It devolved into a fracas between the Allison brothers and Yarborough that took a half dozen race officials to separate them. And the whole thing was caught by the TV cameras. The race, and the Fight, as it’s known in NASCAR lore, made headlines around the country, and the sport gained a legion of new fans. From there, NASCAR has become more and more popular, all the way up to today, when it’s the most popular form of racing in America… all because some dudes started swinging helmets after crashing their General Lees into each other. 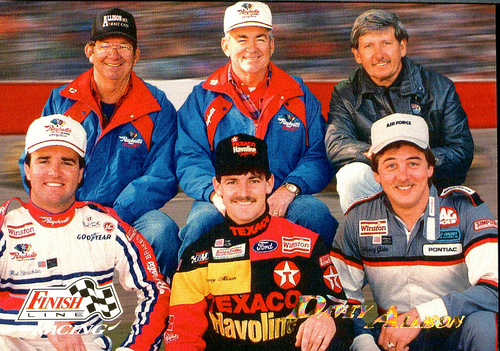 It couldn’t have happened any other way.