In our last article we discussed several types of people that make our daily commute as enjoyable as dining on orangutan ass while listening to looped Hilary Duff songs. Thoughtless space-hogs, obnoxious music lovers and wannabe UFC fighters all scum-bagged their way onto our previous list. This time around we dug deeper into New York’s cesspool of humanity and found even more nightmarish commuters. 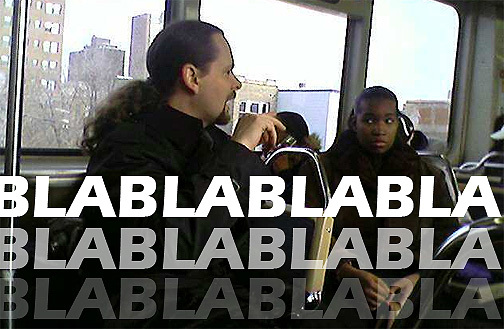 Let’s begin with excessive talkers, arguably the least offensive among a cluster-fuck of hellish commuters. From the second they get on until the second they get off these dim-wits absolutely have to talk, talk, talk. Casual conversation is one thing but non-stop babbling about every last thought rattling around in their stupid heads is mind numbingly irritating. These types of d-bags are clearly unaware of the time honored tradition of shutting the fuck up. Not only are they unable to close their pie-holes they also tend to talk disturbingly LOUD… especially when they’re on a cell phone. Because as everyone knows, the only way for the idiot on the other end to hear you is if you SCREAM. 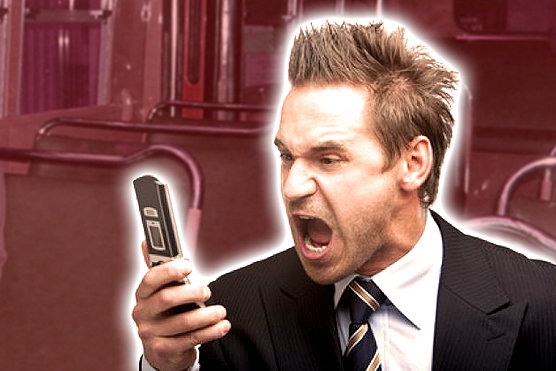 The icing on the crap cake with these sorts of people is that whatever they are blabbing about is often so trivial or yawn inducing that it’s ridiculous everyone around them is forced to listen. Oh you can’t decide between KFC or White Castle for dinner? What’s that, you failed math because your teacher supposedly ‘aint know how to teach ya’ll’? 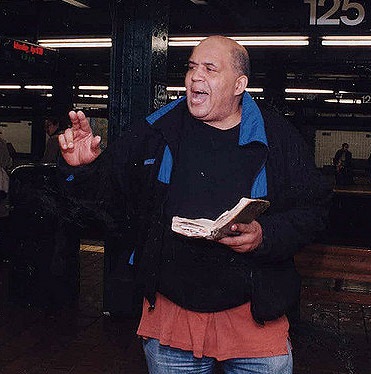 Next on my shit-list are the ‘enlightened’ preachers. From my experience these clowns are exclusive to subways because if they tried screaming bible verses on a bus they’d be tossed off by the driver instantly. But subways, well that’s apparently a free-for-all for virtually any freak inclined to save lost souls. The thing is most normal folks just want to get from point A to point B without getting stabbed or robbed. Having to hear an earsplitting sermon at 7 AM when you are half asleep (and possibly not even religious) or at the end of the day sucks hairy rhino balls. There’s nothing worse than thinking you can get some much needed sleep, read a book or zone out to some music during your ride only to have that dream pissed on by a subway preacher. Yup, anything you intended to do during your commute is out the window the second preacher man decides what’s best for you is to hear mangled quotations from the Book of Revelations about why you’re going to burn in hell for all eternity. 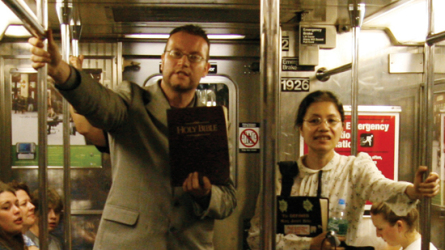 Ironic that they preach about peace and yet give none to anybody.

Ah well, if only there were a place people could visit if they truly wanted to hear about the word of God? Maybe like a really big temple or building of some sort? Yeah, they should invent something like that. 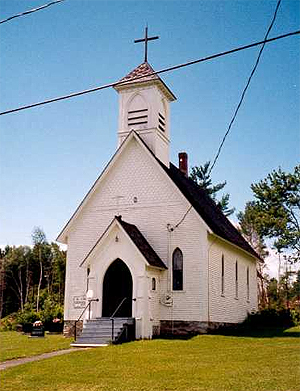 These are Dominoes Pizza stores right? 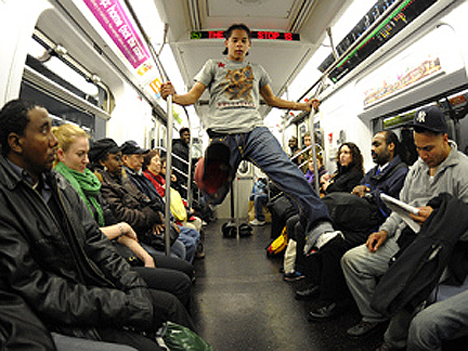 Hey, did you know people had all kinds of talent such as singing, dancing, telling jokes and reading poems? Well on any given day your subway ride can pretty much turn into an endless stream of amateurs all vying for your attention…but mostly they want your pocket change. Now of course I respect hustling to make money – particularly in these hard times. But the assholish side of me just wants to be left the hell alone. Oh wow you can bang on some drums or have homemade puppets that can do a neat jig or jerk each other off? Awesome… here’s a dollar… please just go away. 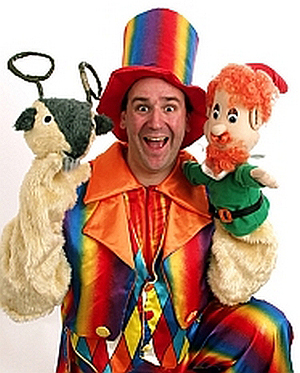 Actually, go away before I hurt you…bad.

When it comes to entertainers, it’s the dancers that really get on my nerves. I’m a paranoid individual and it doesn’t take much to make me edgy. So when some goof gets on the train, plunks down a radio and starts hopping around like a rabies infected jackal the only thing I can think about is that they are going to accidentally kick me in the head. I don’t even worry that they’ll injure others, I’m instantly convinced I’m the one who will get nailed. And when it happens all they’ll do is run away without even offering me an apology for the brain damage. 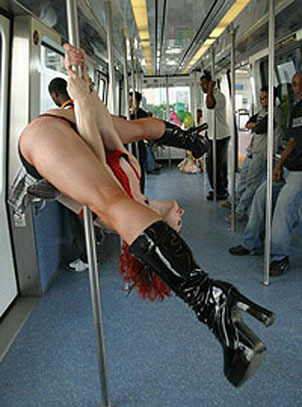 Here’s the only dancing I’ll accept on public transportation. 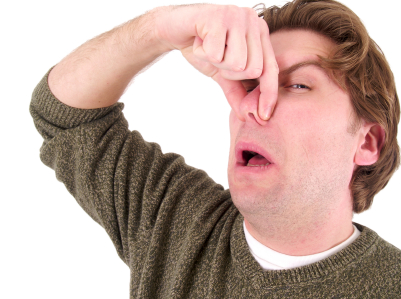 I felt compelled to place hygienically challenged commuters as number 2 because they literally remind me of shit. No joke, I’ve been stuck on trains and buses with people who have either eaten 16 tons of Taco Bell for lunch and can’t stop sharting or have simply gone all the way and taken a full dump in their pants. The thing is, when you are confronted with these fecal fuckers it seems like they are quite comfortable with their own taint. I suppose it should come as no surprise that they assume others won’t mind. They’re essentially like babies with dirty diapers who don’t feel the least bit self-conscious in a room full of people. Hey it is what it is right? Sniiiffff…ahhhh! 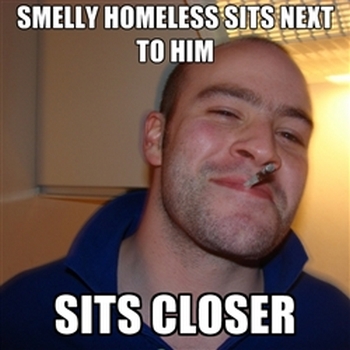 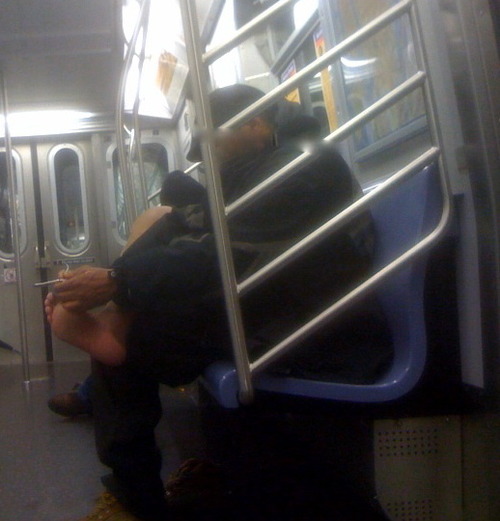 However, keep in mind nail clipping can be done at home. 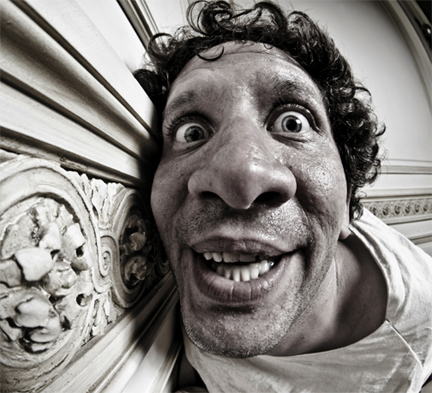 Number one on my list is nut-jobs. Yeah I know that isn’t necessarily the proper term for people who clearly have mental disorders or some serious issue. Truthfully speaking, despite the dickish title this entry isn’t actually about me being disrespectful or shoveling dark internet humor. In fact, I’m bringing this up mostly for the purpose of public safety. For example, check out this vid to see what I mean…

To be blunt, people with severe mental problems do not belong in confined spaces with regular folks, children and the elderly. It’s a disaster waiting to happen and it really isn’t good for anyone. Now unfortunately I can’t even begin to offer a solution to this problem. Obviously this is a complex social issue that regularly involves drug/alcohol abuse, homelessness and far too many who have tragically slipped through life’s cracks.

Nevertheless, these particular people do happen to fit the bill for an article like this.

Yup, I ended this on somewhat of a downer – sue me.