Sadly, mass tragedies occur way too often, and when a disaster of a large scale happens, the whole world is there to see it unfold. Everyone is familiar with stories of supernatural and paranormal events happening in private events or to only one person, but what happens when the paranormal is connected to a mass disaster?

Is it just a coincidence or is there more to it? Here are some stories about mass disasters which were connected to paranormal events in the strangest ways.

The 9/11 incident was so large that many people reported seeing strange phenomena, a lot of people, for example, claimed that they were mysteriously taken to safe places by unknown, invisible forces or figures. After the attacks, Frank Marra, a police sergeant was looking through the damage and the debris when he reported that he saw a nurse wearing a uniform from WWII.

The sergeant spotted the nurse a couple of times and noted that she was carrying food and supplies. When Marra tried to look for her, the nurse disappeared, like a ghost. Marra later found out that others had seen the spirit, and after one year, a crime scene investigator told him that a lot of people reported seeing the anomaly.

Marra also talked to a psychic medium, who claimed that the nurse could have been a spirit who appeared after the incident to collect the souls of the deceased. The scariest thing is perhaps the fact that over 1,000 bodies were never found in the debris.

In 2011, a large tsunami hit the coast of Tohoku, Japan, and more than 16,000 people lost their lives. After the tragedy, the local taxi drivers in the towns that took the most damage such as Ishinomaki have been reporting an inexplicable anomaly.

One taxi driver claimed that just months following the tsunami, a woman entered his car and wanted to go to a district that was completely destroyed by the tsunami.

When the driver told her that the district was destroyed, the woman asked him “am I dead?” and when the taxi driver looked in the back seat, the woman disappeared. Strangely, there was another taxi driver who claimed he picked up a male passenger who wanted to go to a destroyed part of town, but when they reached the destination, the passenger simply disappeared.

Of all the 100 taxi drivers who were interviewed, most of them said that the ghost passengers were young people but that they weren’t malicious.

3Ghost of the Somme

More than a million soldiers died at the Somme in 1916 during one of the deadliest battles of WWI. The battle lasted over four months, but 13 days before the battle was over, a strange event occurred. Namely, when British soldiers were under fire, one of their captains, W.E.

Newcombe noticed a strange beam of white light in the middle of No Man’s Land. The captain claimed that the light changed form and started to look like a man in an old army uniform.

When Newcombe described the man, it was determined that he looked exactly like Lord Kitchener, the famous officer seen on army recruitment posters in Britain during WWI, who actually died one month before the bloody battle started.

The captain described that his soldiers fired flares at the white light but that it didn’t go away and that the German soldiers also saw the silhouette. The figure of Kitchener turned towards the Germans, who stopped firing because they were confused by the ghostly shape. A few moments later, the strange figure of Kitchener disappeared mysteriously and the fighting continued.

In the 1800s, before the building of London’s subway system, a lot of people opposed the idea because people thought digging into the ground would make the Devil very angry. Strangely, a lot of subway stations and lines were actually constructed on ancient graveyards.

Aldgate Station is one of these places and in the 2000s, archaeologists found around 230 graves when they excavated the station. It is believed that these bodies were the victims of the plague. The bodies were destroyed and crushed during the construction of the station.

Aldgate Station has become a site for many inexplicable phenomena, and many workers have witnessed some strange events. One of the weirdest events is when a worker fell on the subway tracks and was hit with 20 thousand volts of electricity but miraculously survived. The workers who saw the incident spotted a ghost of an old woman who appeared in front of the man just seconds before he fell.

More strange events continued to be linked to London’s subway system, such as the incident in 1943 when almost 200 people died when they were crushed in a subway station. They heard a test alarm and went to hide in the station, which led to their deaths. For years after that, subway workers have constantly been reporting strange anomalies underground, such as hearing screams and crying at night.

1Captain of the Titanic

Smith had a strange feeling about the Titanic, and even stranger, he sent his sister a letter two days before the Titanic sank. He wrote that he had a hunch something was wrong and he said that he didn’t like the ship.

As a very experienced captain, Smith had an uneasy feeling about the ship from the beginning and knew that something was wrong. Tragically, his hunch turned out to be right, since over 1,500 passengers died when the ship sank.

6 Top Haunted Attractions to Visit in 2022 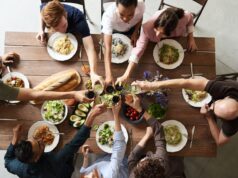