A truly insane moment involves just the right amount of ridiculous elements to yield bizarre and often hilarious results. Now, if you go and throw random nudity into the mix… well then you enter into a whole new, pube-filled world of insanity. What follows are five examples of crazy moments which feature so much nakedness our intern nearly went cross-eyed blurring out the shame.

The Case of the Half Naked Shoplifter 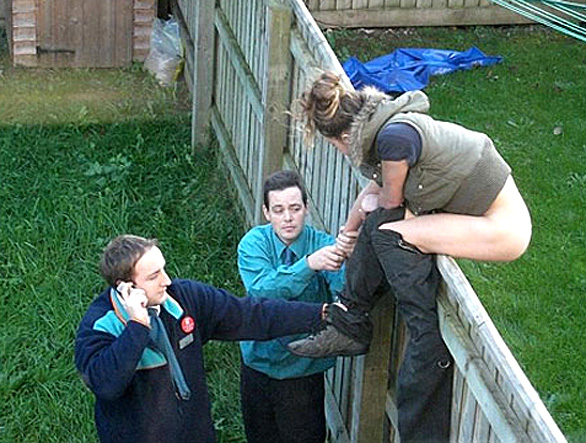 Our first story from Exeter, in Devon, England, features a 22 year old shoplifter named Rebecca Tucker, who dropped her pants (despite not wearing undies) in a weird attempt to escape from Somerfield store employees. Apparently the young woman attempted to steal three legs of lamb and figured the sudden sight of her vagina would blind everyone long enough for her to get away. 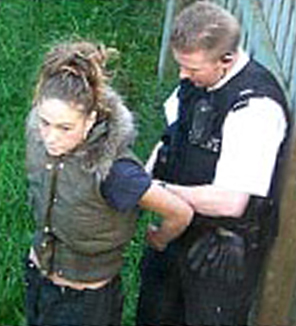 Somerfield manager Ross Dymond, was predictably shocked by the girl’s unexpected exposure. According to Dymond, “My immediate reaction was to let go of her. You don’t know what kind of trouble you could land yourself in and it was hard not to cop an eyeful.” In the end, Tucker realized employees weren’t going to let her go simply because she surrendered her dignity and flashed her goods. In a somewhat feeble last ditch effort she dashed out of the store and tried to sprint over a fence. However, actions like running and jumping are quite difficult to accomplish with your pants around your ankles. 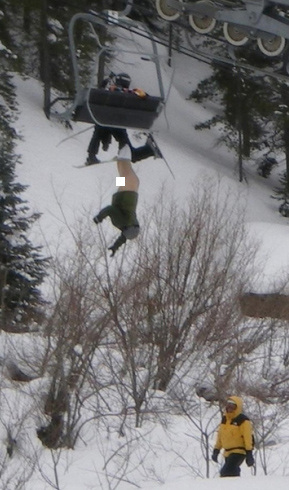 This insane moment occurred in 2009 at Colorado’s Vail Ski Resort. Allegedly a fold-down seat from the chairlift wasn’t placed correctly and the goof caused one unlucky dude to nearly fall through. Much like a lame twist from a raunchy 80’s comedy, when the poor sap fell through his pants somehow caught onto the chair. Needless to say, the suddenly exposed skier was left dangling for 10 really awkward minutes. He was eventually helped down by rescue crews who likely had a tough time controlling their pointing and laughing. 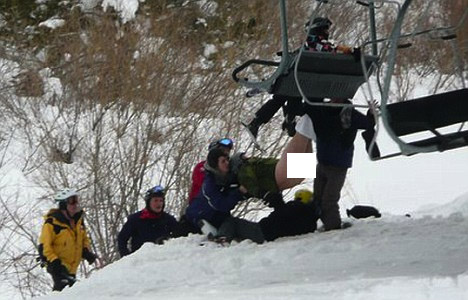 He insisted the yellow snow directly underneath him had nothing to do with his situation.

A local photographer snapped a photo of the man’s nightmare as did countless other skiers. Naturally the pics spread around the internet as fast as anything pertaining to human body parts normally would. The photographer who took the initial photo was suspended from his job. However, everyone else who leaked and posted the images online simply received ‘lol’s. 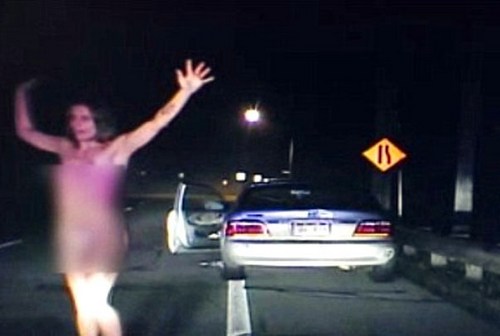 High-speed chases involving massive amounts of alcohol and crazy people are fairly common. However this similar story received tons of media coverage in October, 2011 due to the fact that the girl involved essentially spit in the face of the Reaper and broke more laws than a 14 year old playing 10 hours straight of Grand Theft Auto. The tale of death-defying madness involves a topless, g-string clad, thoroughly shit-faced female named Erin Holdsworth, 28, of Hiram, Ohio. Erin made headlines when she led police on an action movie inspired car chase at speeds of 128mph before ultimately surrendering. How she didn’t end up in a thousand pieces smeared across the road is beyond us.

When officers got a hold of the 99% naked party chick she was promptly handcuffed and tossed into the back of a squad car where she continued to put on quite a show. Holdsworth was nailed with a laundry list of charges which included speeding, operating a vehicle impaired, refusing a blood alcohol test, fleeing and eluding, criminal damage, driving with a suspended license and reckless sexiness. Okay the last one we made up. 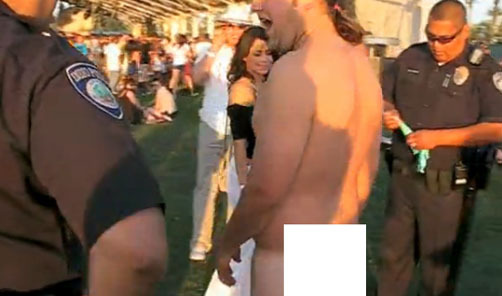 At the 2009 Coachella Music and Arts Festival, one very drugged up “wizard” made the brave decision that his miniature penis was something the world absolutely needed to see. In fact, the man was so passionate about bearing it all that he was actually quoted as saying “Everything about this moment is beautiful!” Police however, didn’t find his lack of shame “beautiful” and repeatedly ordered him to put his wizard duds back on immediately. Despite countless attempts by cops to get the man clothed, the dude simply refused. He was intent on being naked and damn it, no human being on the planet was going to stop him. Well, unfortunately for him a taser isn’t human. 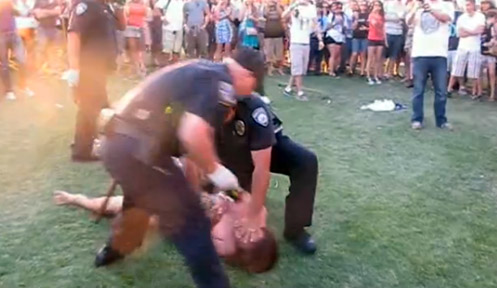 Eventually, the bold exhibitionist was wrestled to the ground and repeatedly tasered by one of the police. It was at this point that the crowd got noticeably pissed and instantly turned on the police. The end result was a shocking uncensored video of the incident being posted online and tons of heated discussions about police brutality and social injustice. Also the nude dude showed up on Tosh.0 for a ridiculous Web Redemption.

Picture yourself in a Chinese restaurant enjoying some lemon chicken and trying not to think about the fourteen hundred calories and day’s worth of fat you’re gobbling down. Just as you attempt to open your adamantium fortune cookie you’re confronted by a psychotic 60-year-old woman. According to the owner of Dragon China restaurant in Bay Ridge, Brooklyn, Dajo Zhao, the nightmare began when an unhinged local woman came in and asked the cashier, “Everything is for free?” Naturally, the cashier calmly explained that everything in their establishment was not “free”. Little did the poor cashier know that little tid-bit of info was the exact opposite of what a lunatic on the verge of a public meltdown wanted to hear. 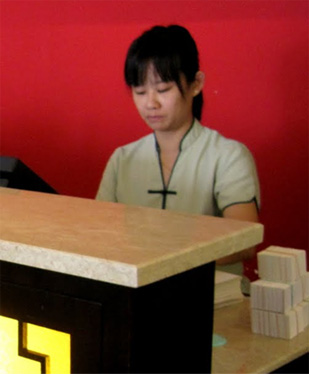 She really should have known better then to incite a crazy person with a reasonable response.

True to form, the unstable woman lost her shit over the ‘everything isn’t free conundrum’ and began screaming, “Free, free, free, free!!!” Soon all hell broke loose as the woman transformed into a saggy version of She-Hulk. Noreen Monier, an owner of a nearby store witnessed the event and gave an inside account of what went down. “I told her to stop and she threw a watermelon at me. She had superhuman strength. She said, “I’ll stop when I’m good and ready!” Apparently it wasn’t enough that the rampaging 60-year old was disturbing customers, tearing the place apart, starting grease fires, punching chefs, tossing around money, picking up and answering phone calls…she also had to launch giant fruit at anyone who tried to calm her down. Following the destruction of the restaurant the psychotic woman stomped out into the street where hecklers with a sick sense of humor basically egged her on. And what was her response to the growing crowd of onlookers you ask? Unfortunately this… 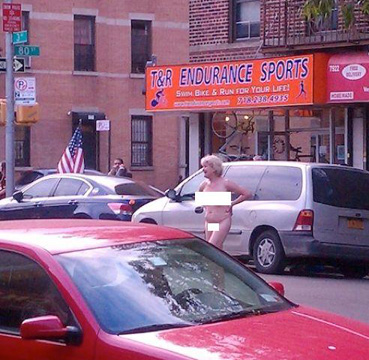 Clearly the only logical way to cap off a loony tirade is to strip completely naked in public.

Eventually she jumped onto the hood of a car which was driving through the area and proceeded to spread eagle. We can only imagine the horror the driver felt as granny propped herself onto the hood of his ride and got into a birthing position. 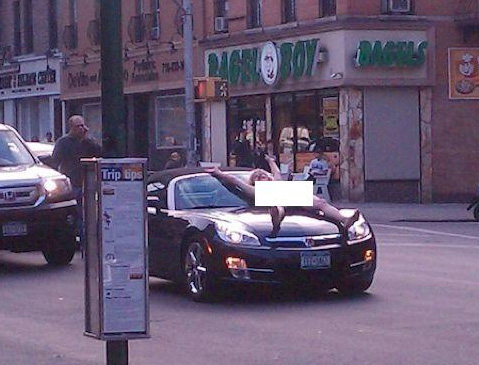 Sadly the car was just washed earlier that day.

The woman’s seemingly endless meltdown eventually ended when she was caught by police and hauled off to wherever cops take naked old people. That was that. Sadly, the images of her saggy nude romp will destroy many an erection for years to come.