The World Cup celebrates the “beautiful game” on the largest stage on Earth. Given the vast array of countries that participate, from the desperate Americans to the boisterous Argentines to the hilariously disappointing French, it makes sense that no one country could hold the event permanently. And the breakneck “once-every-four-years” scheduling is topped only by the blistering pace of the game itself!

And so the tournament remains a quadrennial nomad, with each move exposing the world to a new culture. Naturally, the notoriously clenched sphincters at FIFA typically prefer these to be on the pre-approved list of inoffensive, marketable cultures. And given that they only brought the game to the soccer mad continent of Africa for the first time this year, it’s pretty clear they were waiting for just the right one. While many could have forewarned about the incessant droning of vuvuzelas that would be the trademark of the South African World Cup, we like to think those people were drowned out by the incessant droning of vuvuzelas. 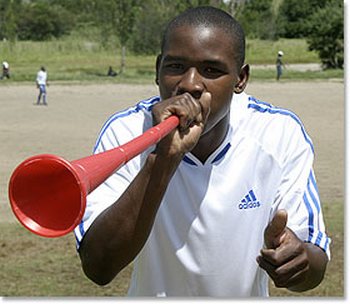 They’ve become a divisive issue, with fascinated tourists looking to buy, suppliers scrambling to keep up and people at home attempting to understand why jackhammer-levels of sound make a 90 minute long wait for a goal that never comes more enjoyable. This fascination has been reflected in the world of technology and the Internet more than anywhere else. Heck, we gotta do something to kill time between halves while we watch the game on our work computers. Here are five high tech websites and programs dedicated to the low tech horn.

Even the most dedicated supporters of the vuvuzela tradition have got to be pretty relieved when the match is over. It’s been reported that they can reach sound pressures of 120 dB at a distance of one meter, which is almost as dangerous a Cleveland Browns fan at any distance. With thousands of rabid fans blowing constantly in a crowded stadium, there’s more potential for severe ear damage than a Lady GaGa concert. 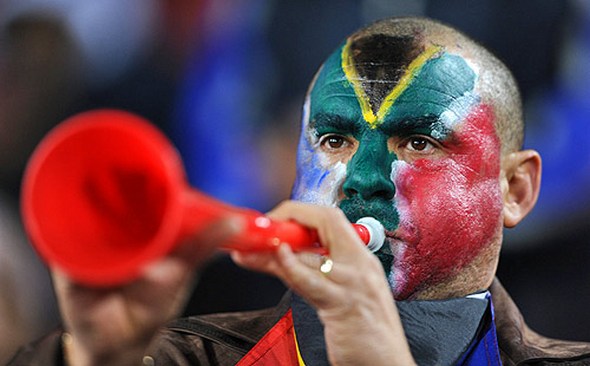 So our minds and eardrums are blown by the existence of websites like Vuvuzela.fm, which are dedicated to blasting a clip of the drum-busters nonstop. That’s right. In case the mood strikes you, you have constant access to off-key din 24/7. We suggest using it to drown out annoying children, punishing your dog for chewing your best Premier League scarf or just setting the mood for some lovin’ with your best gal. What woman wouldn’t swoon for a long, hard, plastic phallus?

If you decide to head on down to the only bar in your area not playing World Cup highlights or live coverage, you might find yourself some brief serenity from the ever-present bleating. That is, unless your watering hole is cool enough to attract the kind of clueless hipsters who download one of the several vuvuzela apps springing up for iPod, iPhone and iPad! 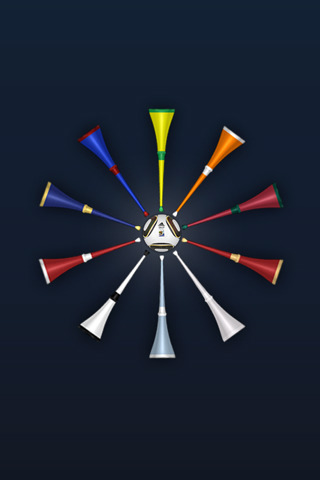 Yes, no matter what method you use to bow to the altar of Jobs, you can find an app capable of annoying your fellow humans into giving you a spontaneous blanket party. There are a number of them out there on the market (that we refuse to link to) and we can’t even begin to express our frustration at the fact that people are paying actual money (up to $1.99 a pop) for some of them… particularly when there are free versions available.

That means there were people who looked at their options and decided: “No, I think I need to go the extra mile and get the premium app to display just how much of a schmuck I am!”

If you count yourself among the scores of fans, commentators and apparently scientists who find the droning of the horns deeply irritating, there may be hope. And it doesn’t come from turning off the TV and just playing soccer in real life.

A number of services have popped up in response to the demand and developed methods of filtering out the most maddening tones from broadcasts. While the broadcasters themselves are switching to better microphones and adjusting their levels, there are a few more tricks you can do on your end to soothe your psyche.

Products like the AntiVuvuzelaFilter, Devuvuzelator or Vuvux are able to practically eliminate the “droning hive of angry bees” sound from your broadcast. The effect is… well… actually pretty amazing.

Unfortunately, they tend to require at least a little technical know-how to configure, so it might be easier to just bang your head against your workstation and hope the ringing in your ears will cancel things out for you.