Okay, we’re going to make a pretty controversial statement here, right off the bat: killing is bad. We know, we’re taking a pretty crazy stance on the issue, but we stand by the idea that taking a life is just not a very nice thing to do. That being said, when we’re talking about the fictional universes that exist within television shows and movies, things like morals and righteousness can often take a backseat to stuff like, oh, being badass and awesome, which it turns out often comes with the territory of fictional murderers. Here are some of our favorites…

Even if you have never seen the show Dexter, chances are pretty good that you at least have an inkling of what it’s about. Dexter Morgan is a serial killer who works with Miami Metro Homicide as a blood splatter analyst, something he’s an expert in considering how good he is at creating blood splatter patterns. The thing about Dexter, though, is that he controls his homicidal urges by living life with a certain code. What the code boils down to is that he only kills bad people who have gotten away with their horrendous crimes.

So basically, he’s a serial killer who only kills other serial killers, with a few rapists and child molesters thrown in for good measure. We would go so far as to say that Dexter is without question the easiest murderer to root for in all fictional worlds, because he’s basically like Batman, only if Batman brutally murdered people rather than sending them through the revolving door of Arkham. We like Dexter’s method better, because seriously, how many times can you send the Joker back to Arkham before you realize he’ll just be back on the street in two or three days anyway? 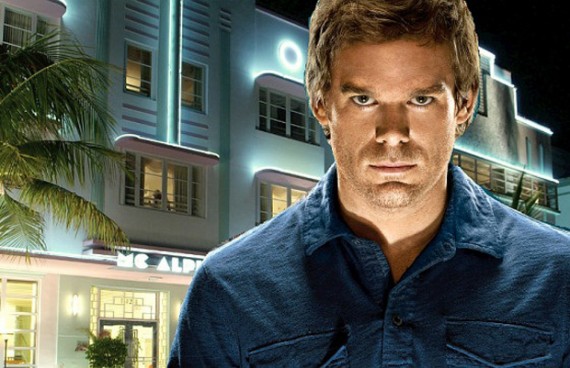 Just like Dexter, Hannibal Lecter has, over time, become a pretty easy mass murderer to root for, though unlike Dexter he doesn’t limit his killing to only the wicked. Hannibal “The Cannibal” is, plain and simple, a monster. But he’s a very intelligent and charming monster who is a master of the human mind, having been a doctor before he was caught killing and eating people.

The biggest reason we all love Hannibal Lecter so much is the amazing performance given by Anthony Hopkins, who plays the character as someone who is just about omnipotent, in that he always knows more about what’s going on than anyone else he encounters, save perhaps for Clarice Starling. He helps the FBI catch a few notorious serial killers before making his escape and going right back to murdering and eating people. When will that crazy doctor learn his lesson? The character is so popular that he’s been portrayed on the big screen by both Hopkins and, in the earlier film Manhunter, Brian Cox, and a new TV series called Hannibal is coming out this fall. 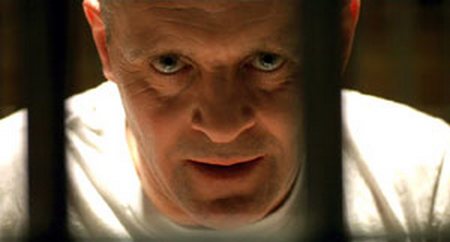 Hey, remember when we mentioned Batman when talking about Dexter? Well, it turns out that before he became Batman, Christian Bale was Patrick Bateman, the psychotic serial killer from American Psycho. We can’t prove that Bateman and Batman are the same person, but the names are close enough that we’d like to believe that there was a period in which Bruce Wayne just went nuts on people he didn’t like.

The WASP-y Bateman is indiscriminate about who he kills, butchering the homeless, prostitutes and even colleagues. We really shouldn’t particularly like Bateman, but one scene in particular forever endears him to us. If you’ve seen the movie, you know exactly which scene we’re talking about, as it’s the sequence in which he readies a colleague for execution while going on and on about Huey Lewis and the News. It helps us love him even more that his victim is Jared Leto. 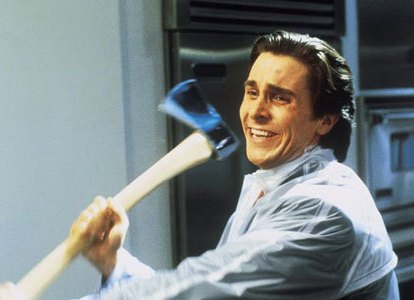 While he’s not actually a serial killer, Anton Chigurh, the menacing villain from No Country for Old Men, is perhaps the most frightening murderer on this list. He may not have the murderous flair and showmanship of someone like Dexter, Lecter or Bateman, but he still might be the most monstrous. He is, for the most part, a silent hitman who never stops coming until he’s tracked down and killed his intended target, making him kind of like a mummy or a zombie in that regard.

His method for killing is equally terrifying, as he uses a captive bolt pistol, which is another way of saying a cattle gun that delivers a forceful strike to the head. While he’s not technically a serial killer, his respect for human life is pretty minimal, as he lets the fates of random people he encounters be decided by the flip of a coin. Basically, if you unwittingly offend Anton Chigurh, you’ve got a 50/50 chance of winding up dead at the end of that encounter. As portrayed by Javier Bardem, he is equally terrifying and mesmerizing, and perhaps his most terrifying trait is that hair. Oh, lord, that awful, awful hair. 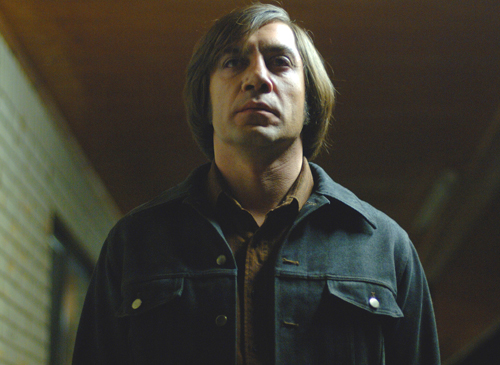 And now we get to our first character who did not originate in a novel. Dexter, Lecter, Bateman and Chigurh all began their fictional lives on the pages of popular books, but Stuntman Mike is entirely the creation of Quentin Tarantino, with a few obvious nods to some of his favorite exploitation movies of the 1970’s. Featured in the film Death Proof, which was one half of the Grindhouse collaboration between Tarantino and Robert Rodriguez, Stuntman Mike is a sadistic killer who uses his nearly indestructible car to stalk and brutally kill pretty young women.

The fact that he’s played by Kurt Russell only further endears him to us, because seriously, Kurt Russell is the freaking man. He’s played as an over the hill has been who is a lot closer to a never was, having worked as a stunt double on various television shows in the 1970’s and 1980’s. He’s somewhat obnoxious, but turns on the charm whenever he needs it in order to entice a victim into his car or score a lap dance in the middle of a Texas bar. That he receives his comeuppance at the hands of some very angry women in a Dodge Challenger at the end of the film goes without saying, but Russell’s charisma made us enjoy the hell out of the ride with Stuntman Mike. 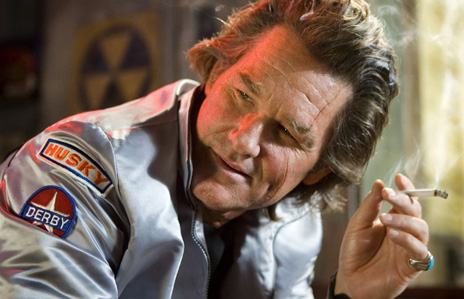