According to that country song – we think it’s called something like “Every Country Song You’ve Ever Heard Accidently (Because You Don’t Really Listen to Country – Honest!)” – everything is better in the country. The beer is colder, the truck tires are bigger, heck even the livestock is more attractive.

So you city pansies have movies, theater, and muggings to look forward to in order to relieve the tedium of your every day life? Check out why the “country is better” moniker is every bit as applicable when it comes to entertainment options – and by “better,” we also mean “more likely to end in carnage and death.” 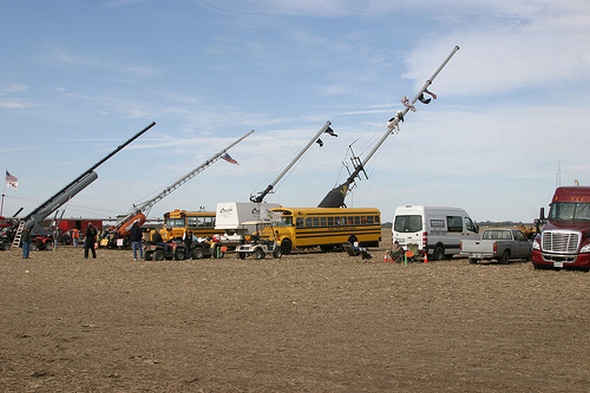 Is anyone else terrified by the sheer number of school buses in this picture?

For those lost, uninitiated souls, “punkin’ chunkin‘” is roughly translated as “hurling innocent gourds across state lines at velocities approaching the speed of sound to show those other bumpkins what’s what.”

Seriously, we’re talking about hurling the hell out of these things. You hear about it and think, “aw, that’s cute, they’re using a homemade contraption to launch pumpkins at each other. Sounds like something out of a light-hearted TV movie made to celebrate Thanksgiving!” If so, you are in for a low income wakeup call, unless you watch the kind of TV movies in which things end in blood and death (something on Lifetime, perhaps?)

Punkin’ chunkers throw pumpkins using slingshots, catapults, trebuchets, pneumatics, and any combination of the above. You have to clear a swathe on all sides of the chunker just to lessen the chance of serious injury or death to the audience. And, for the most part, the constructors and operators of these terrifying machines aren’t physicists and engineers. These are people who are almost as interested in seeing which chunker breaks the most (and in the process turning awesome amounts of potential energy into uncontrolled kinetic energy) as in seeing whether they can throw the pumpkins any real distance. And yes, these reasons all fit into the “why it’s awesome category.”

Of course, what’s awesome is often dangerous, and so pretty much everything from the last paragraph goes here. You might be surprised to find out that people can come up with some amazingly damaging equipment with just compressed gases and a few pieces of wood, without even involving fire. 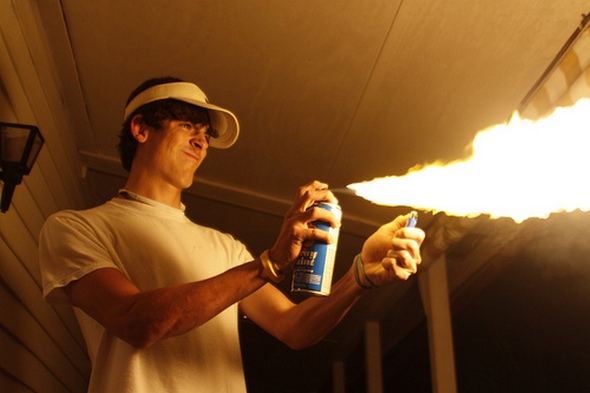 Also, as with the rest of these activities, adding alcohol just increases the danger potential exponentially. And don’t think for a moment that alcohol won’t be added. Participants in many rural types of entertainment (not all, we don’t want to hit every generalized stereotype here) consider alcohol to be just an important a food group as red meat and mayonnaise. 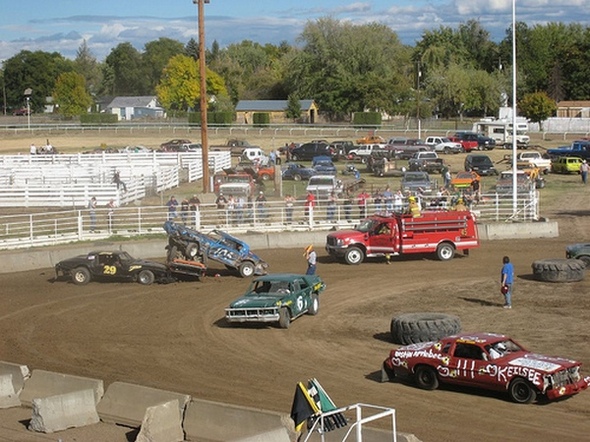 I’d like some more cars on my car, if you get a chance, thanks!

Demolition derby is basically like bumper cars, but with real cars instead of those electric pieces of crud that invariably end up getting stuck ramming repeatedly into a wall as you get owned by five year olds who somehow know how to operate the stupid things… and yes, if you are sensing bitterness here, you would be correct.

Chances are, if you have any interest in motorsports whatsoever, you know why most people watch them – in the hopes that they’ll get to see a spectacular crash. Now, most people might never admit to this, but why else would you stare at cars moving quickly around a course for hours and hours?

If you take out all that boring driving in circles and replace it with the juicy good bits, it will probably become the best thing ever. It’s like replacing the tasteless cardboard cookie parts of the Oreo with more delicious Oreo filling. 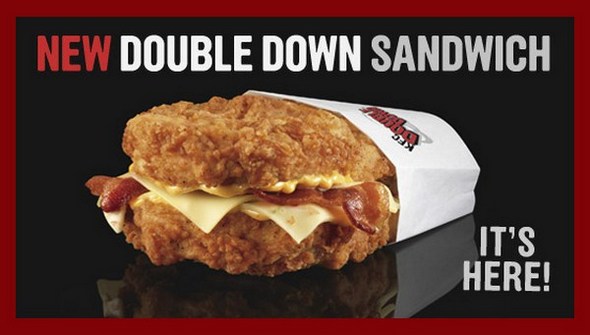 Or like this. Just about the same number of heart attacks too.

Have you ever seen that tragic video of the woman getting punched in the face by a tire at a Nascar race? That’s an event where people are not intentionally smashing cars into other cars. Take everything bad that you’ve ever heard about car crashes, and put it all together in a danger-filled package wrapped in danger and doused in danger sauce. Burning engines, flying shrapnel, flying shrapnel on fire, exploding fuel tanks, flying exploding fuel tanks, flying burning engines covered in more fire, and more, all surrounded by a crowd that keeps inching closer and closer to the action. And, of course, drinking. 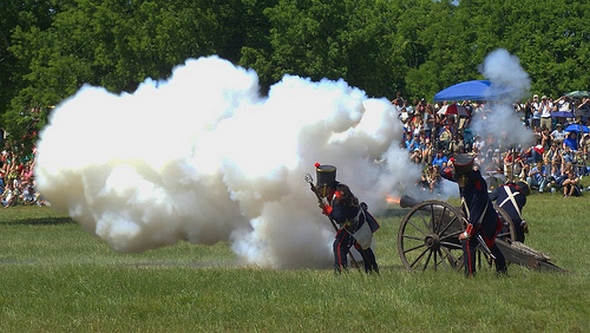 Many people lost their lives in the tragic reenactment of 2010.

People like video games because video games give them the chance to participate in war without any of the annoying dying bits. But however realistic video games get, it’s difficult to get totally immersed when your dog needs to go to the bathroom and your girlfriend refuses to get you another energy drink from the fridge.

Here’s where reenactments come in. It’s impossible to get more immersed than by being surrounded by hundreds of guys dressed in full regalia with actual replica weapons without going back in time or taking a lengthy tour of duty.

Did we say replica weapons? Oops, because people have actually been shot during reenactments before.

And even if the guns aren’t all loaded, there are still plenty of sharp pokey things around. Add to that the danger of walking under the sweltering Southern sun in wool uniforms, people riding on horses, and people getting belligerent when their side loses (plus probably drinking), and you’ve got a potent danger mix.