Before Harry Potter puzzled its younger fanbase with complicated explanations of split souls and objects of power, the same concept had been floating around in movies and literature for some time. Here are four examples.

Before Harry Potter puzzled its younger fanbase with complicated explanations of split souls and objects of power, the same concept had been floating around in movies and literature for some time. Here are four examples.

“My Other Soul Is In A Snake”

In the Harry Potter series, we are introduced to the concept of a ‘Horcrux.’ A ‘Horcrux’ is an object (animate or inanimate) in which you can stash part of your soul, also making it a cursed item. You would have to actually commit murder in order to have the ability to split your soul in the first place. The other problem is that you are tied to the object. If the object is somehow destroyed, then you are destroyed as well. Now, you can potentially have up to seven ‘Horcruxes,’ but once they are all gone – you are gone as well. Even if your present form is healthy, the destruction of your soul will take that form as well. This got us to thinking a historical concept of what ‘Horcruxes’ might have appeared in literature as well as film before we even really knew what they were.

The Portrait of Dorian Gray 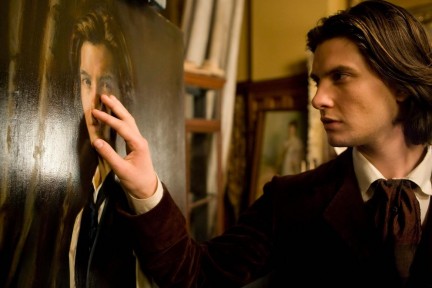 Dorian Gray first appeared in the novel The Picture of Dorian Gray by Oscar Wilde in 1890. The Picture presented a vain young man who would stay young forever as a portrait of Dorian grew older. However, if Dorian is forced to look at the picture or if the picture is destroyed, then age would transfer back to Gray. In the case of this Horcrux, the process of transferring the soul appears to be a slow one. However, once complete, it is irreversible. Modern audiences would know Gray from a fairly faithful adaptation done a few years ago starring Ben Barnes. There is also a segment who may know Gray from the big-budget movie League of Extraordinary Gentlemen or the comic on which that movie was based by Alan Moore. In that movie, Gray had certain immortal properties much like those of a vampire. Gray was not only immortal, he also seemed to possess an almost Wolverine-like healing factor. The difference is that Gray could walk freely in the daylight and could only be destroyed by action against or a viewing of the picture. In most any portrayal though, Gray’s soul and life force is tied to the continued health of the painting. Gray appears (like many) to have only split his soul one time. “Precious? It’s been called that before, but not by you.”

After the destruction of his body by Isildur, the only thing that tethered the soul of the Dark Lord Sauron to our realm in the Lord of the Rings trilogy was The One Ring. While the One Ring existed, Sauron himself was likewise immortal. It was well known that the fate of Sauron as well as his soul was tied to the One Ring. Obviously, Sauron was a murderer. If there was only one life required to create the One Ring, then Sauron would have happily offered a hundred lives just to make sure. The somewhat physical form in which Sauron is able to take is as a Giant Eye which is lidless at the top of a tower in the cursed realm of Mordor. The One Ring can only be destroyed in the fires in which it was made. Once the One Ring is destroyed, the Great Eye, his tower, as well as his creations all suffer a similar fate to One Ring. The source of Sauron’s soul is obviously the One Ring. Much like the snake and Voldemort, once the last Horcrux is destroyed, Sauron was destroyed as well.

Various Objects In ‘Conan The Destroyer’

“You Can Clearly See that the design is early Crimean God-craft.”

Horcruxes are prevalent enough in the movie Conan The Destroyer that you would practically think that was where the concept came from. The Magical Jeweled Horn possesses the soul of the ‘Dreaming God.’ Once the horn is put on the statue, the statue all of the sudden has sentience. The other example is the Sorcerer and the hall of mirrors. The Sorcerer appears to be indestructible at first. However, when Conan starts striking out against the Mirrors, the wounds start taking effect on the Sorcerer (who has also morphed into a beast.)

It seems that in the cult of the ‘Dreaming God,’ the magic of the Horcrux is not only reserved for the ‘Dreaming God’ itself but also for its minions. It is entirely possible that Queen Taramis was on her way to creating a Horcrux of her own. We will never know since there was also the unfortunate detail of the prophecy being fulfilled. The interesting part is the role of Princess Jehnna. Jehnna can touch the jewel which no one else can. Jehnna is also the sacrifice that may be required to take control of the Dreaming God. If you use the rules of the Horcrux, then Jehnna may also be a Horcrux in and of herself. John as a Horcrux would be important on two levels. If you are to control the Dreaming God by killing Jehnna as a sacrifice, then you may be willing to demonstrate to the Dreaming God that you are willing to destroy part of their soul (and can potentially destroy the rest just as easily.) Waking up to someone destroying your soul would certainly be a sobering effect. Second, if a murder is required to split your soul, then you would have accomplished this part of the magic immediately as well.

The Mirror On The Wall 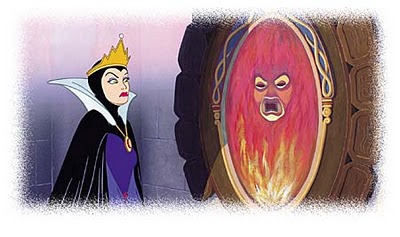 One of the really fascinating parts of the Snow White mythos is the general speculation on how the Magic Mirror came to be. If the Magic Mirror were actually in the Harry Potter universe as well as the Snow White/Grimm Fairy Tale Universe, then it would all make a bit more sense. This would also potentially explain why he was in the employ of the Queen Step Mother who was also a dark witch. Think about it in the following terms. The Magic Mirror was once a dark wizard who killed someone and created a Horcrux. In turn, an equally Dark Witch had saved the Horcrux when the body of the Wizard was destroyed. Half of the soul was captured in the mirror. The Mirror has magical properties as well as can communicate. This is not too far off from what the Diary in the Harry Potter books can do.

The Witch Queen keeps the Mirror under wraps with the threat of destruction as well as the promise that one day she may provide a body to release him. Thus, the Mirror (while powerful) knows that it has to do the bidding of the Queen even while holding a considerable amount of contempt for her. In almost every version of the Snow White story, the Mirror takes a certain amount of joy in telling the Queen about her own potential misfortune. If the Mirror needed the Queen for survival, then the Mirror might be a little more careful in the matter of the Queen’s safety.